All horses have what I like to call magnets–objects they are naturally drawn to. Magnets can be things like the barn or other horses in the arena or pasture. A common magnet for horses, especially horses ridden mainly in arenas is the arena gate. Horses are drawn to arena gates because the gate leads to the barn and the barn leads to other horses, rest and food. 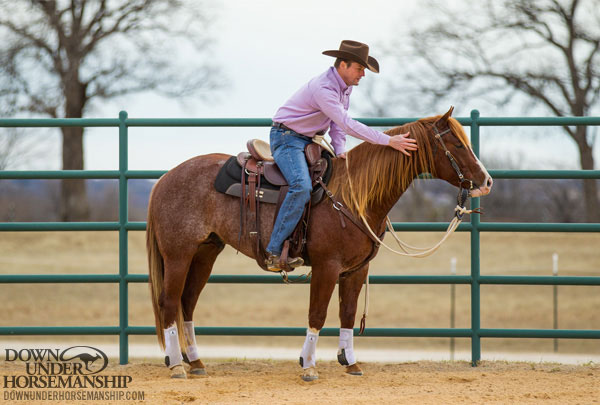 Dealing with a horse’s magnets can be frustrating at best and downright dangerous at worst. No matter what the magnet is, they all have the same effect–making the horse go off course, whether that be leaving an exercise and trying to go back to the gate or taking off in the middle of a trail ride to get back to the barn. All magnets involve the horse wanting to be somewhere other than where he is, doing something other than what he is doing.

The key to fixing your horse’s magnets is to make the right thing easy and the wrong thing difficult. You’ll accomplish that by moving his feet where he wants to be and letting him rest away from the magnet. This approach works well because horses are basically lazy creatures. They’d rather stand still and relax than work and risk the chance of losing weight.

Although I’m using the arena gate as the magnet in this example, the fix I’m going to explain can be applied to almost any situation. To deter your horse from hanging out at the gate, make being next to the gate feel uncomfortable to him by working his feet there. Right now, your horse is attracted to the gate because he knows that’s how he gets out of work and back to the barn.

How you work your horse’s feet at the gate isn’t important. What is important, though, is that you make him move with energy. My go-to exercise for this situation is rollbacks next to the gate. Canter a 50-foot circle next to the gate. When you reach the gate, stop the horse and then shape him for the rollback by tipping his nose toward the gate. Then press your outside leg up near his shoulder to roll him back in toward the gate. Hustle the horse out of the turn and onto the circle. When you reach the gate, roll back again.

Continue to do rollbacks next to the gate for several minutes, and then ride the horse to the opposite end of the arena and let him rest. Put him on a big, lose rein and rub on him. After letting him rest for five minutes, take him back to the gate and hustle his feet again.

It won’t take many repetitions of hustling the horse’s feet at the gate and resting him away from it for the horse to realize that the arena gate is not going to get him the rest and escape from work that he thought it would. In fact, he’ll soon realize that it only equals hard work!