When Not Ruf At All won the 2013 National Reining Horse Association Futurity Open Championship, owner Vaughn Zimmerman, of Missouri, was propelled into the elite ranks of NRHA Million Dollar Owners.

Zimmerman first became interested in horses decades ago. Although the venture began as a hobby, he soon began to focus on halter and pleasure horses. In the 1990s, he met reiner Kenny Eppers, and Zimmerman focused his sights on reining. 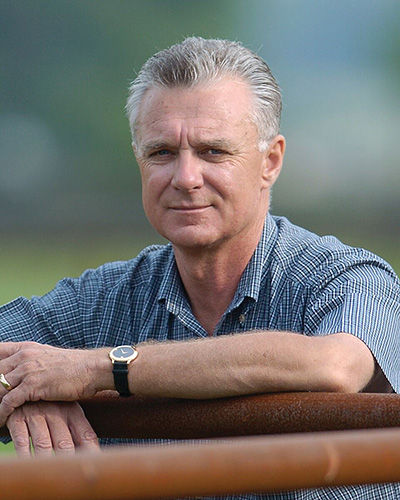 “I’ve been fortunate enough to breed and raise winning horses in so many different areas. I’ve had racehorses, halter horses, pleasure horses, but the reiners have held my interest for the longest time,” Zimmerman recalled.

In the late 1990s, Zimmerman turned his focus to breeding, with headline stallion Skeets Peppy. The son of legendary sire Peppy San Badger was an NRHA Open Futurity Finalist and claimed the NRHA 1999 Open Reserve World Championship. He went on to win more than $77,000 in competition, and his foals have won money in multiple associations, including more than $885,000 in NRHA.

That same year, a young prospect named Not Ruf At All, by A Sparkling Vintage out of All Ruffed Up, was catching eyes in Zimmerman’s barn.

Bobby Avila had taken the stallion through his early training, then the Zimmermans decided to offer Not Ruf At All in the 2012 NRHA Futurity Prospect Sale. When the reserve wasn’t met, they decided Vanlandingham would be the right fit for the big-stopping colt.

From that point, the Zimmerman program began to domino. Vanlandingham and Not Ruf At All first won the Tulsa Reining Classic Open Futurity Championship, then went on to win the High Roller Classic. The pair were the odds-on favorite at the 2013 NRHA Futurity, and they didn’t disappoint. Vanlandingham and Not Ruf At All had marked a 225 to take the Open title, winning more than $200,000 for the year and pushing Zimmerman more than $20,000 past the million dollar threshold as an owner.

Not Ruf At All and Vanlandingham continued to win, and the pair went on to earn more than $456,501, but ultimately, it was time for the next stage of Ruf’s career. “We hated to see him quit showing. He’s the best show horse we’ve ever owned,” Zimmerman admitted.

Not Ruf At All was more than ready to excel in his new role as a breeding stallion. “The first crops were small because we weren’t standing him to an open book. But soon we were seeing strong support from people around the globe – even Europe. People have a lot of choices because they can breed to established studs – so when you’re in the proving stages and they support you, it means a lot,” Zimmerman explained.

In the beginning, Zimmerman bred his own set of broodmares to the young stallion, and the first foals came of age in 2018.

Not Ruf At All’s highest money earner is Excessive Rufness (Smokin Lady Gunner), a 3-year-old owned by Zimmerman. Winning the inaugural Invitational Futurity with Vanlandingham boosted his earnings over the $100,000 mark. Another Zimmerman-owned standout by the stallion is Its All About Ruff (out of Dun Pretty Nifty), with $73,715 in lifetime earnings.

Zimmerman was inducted to NRHA’s Hall of Fame in 2018. Throughout the years he has been a staunch supporter of the reining industry, serving on the Board of Directors for NRHA, for the Reining Horse Foundation, and by being a longtime NRHA Corporate Partner.

Although he never showed himself, Zimmerman’s family has seen much success in the show pen. Both his sons, Matt and Justin, have NRHA earnings. Justin has been the most active in the show pen with earnings nearing $77,000, including a Level 3 Non Pro NRHA Futurity reserve championship.

Justin’s son, Jacob, and daughter, Taylor, are both active in reining. Jacob, whose lifetime earnings exceed $81,000, won the 2020 NRHA Futurity Level 2 Non Pro Championship and Level 3 Non Pro Reserve Championship on Rufin Up The Chics (Not Ruf At All x Ms Playalotta Chic). Taylor, whose biggest victories in NRHA competition include multiple Level 4 Non Pro finals qualifications at all the major NRHA events, has lifetime earnings of $255,642.

Zimmerman Performance Horses is located on 150 acres just outside Springfield, Missouri. With a 40,000 square foot, the state-of-the-art facility can easily accommodate not only the breeding and foaling of broodmares but also the training of their two-year-olds and personal show horses. With the assistance of Zimmerman Performance Horses’ resident trainer, Bobby Avila, Jr., the young prospects are started, evaluated, and sent on to the open trainer who can best develop the abilities of each individual.

The National Reining Horse Association is a nonprofit organization dedicated to promoting and enhancing the sport of reining through a core mission: “Respect the Horse. Respect the Sport.” Founded in 1966, NRHA now has nearly 15,000 members and sets the standards for reining worldwide. Reining is an international sport and continues to grow year after year by offering opportunities for horse enthusiasts of all ages.