Congratulations! Your long-awaited foal is finally here. During these first weeks and months you’ll want to:

After your foal is a week or two old and your vet says it’s safe for him to be with others, the best plan is to turn him out with other mares and foals of similar age, provided they get along. It’s up to you to monitor how they’re getting along and that the environment is safe for the young foal.

For safety’s sake, don’t put a mare and a young foal out with geldings or mares without foals, as these pasture-mates may be aggressive toward the baby.

All turn-out areas should offer shade/shelter so the young foal doesn’t get overheated with no way to get out of the sun.

“It’s important for foals to have some quiet time in a stall with the mare. They will lay down as this rest is an important part of appropriate musculoskeletal growth,” says Armon Blair, DVM, a veterinarian with Ocala Equine Hospital in Ocala, Florida.

Right after foaling, the mare’s energy and protein requirements increase dramatically. The lactating mare faces her highest nutritional demands during the first three months. If she isn’t fed properly to meet those demands, she will lose weight and body condition. You should be feeding a concentrate (grain/feed) designed for lactating mares and quality forage (hay and/or grass). A supplement formulated for pregnant and nursing mares is also helpful. Your veterinarian can guide you if you have questions about how much to feed, but start with these guidelines:

During the first month, the young foal will nibble grass as well as his mother’s grain and hay, but at this point, all of his nutritional needs are met by his dam’s milk. Starting about a month of age, you can begin introducing small amounts of a commercial feed designed specifically for growing foals.

In order to maintain optimal growth, the foal should be eating his own ration as well as nursing by the time he’s two months old. Go easy on the grain, though, because the foal’s stomach is relatively small; divide the ration into two or three small feedings per day and don’t feed more than one pound of feed per day per month of age. (For example, a two-month old foal should never be fed more than two pounds of feed per day.) You can also introduce a supplement designed specifically for growing foals.

A foal may gain as much as three pounds of body weight per day during the first 90 days. Dr. Blair cautions that overfeeding a foal can lead to angular limb deformities and other potential issues, so you’ll want to talk with your veterinarian when the foal is young to design a sound nutrition plan.

You’ve already learned how to control and handle a young foal by cradling him. 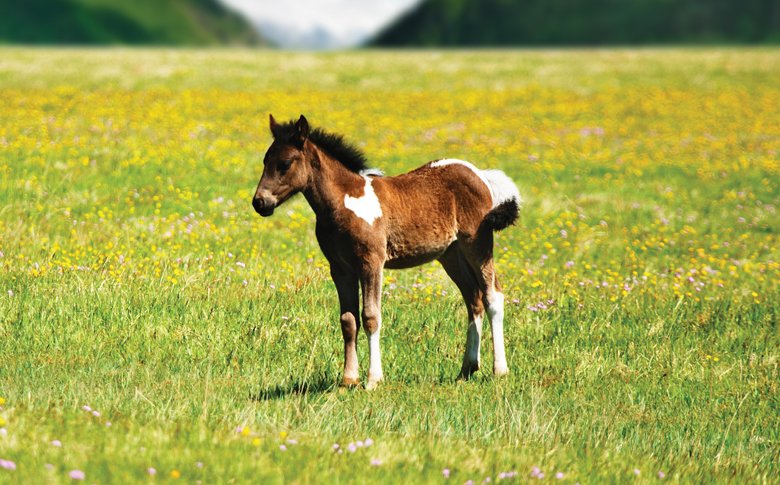 You can, and should, introduce a leather foal halter to the baby early. Adjust the halter so you can easily slide a finger under the noseband and all parts of the halter easily. It shouldn’t be either loose or snug, so make sure to adjust it as the foal grows.

The safest strategy is to not leave the halter on all the time. The foal will quickly get accustomed to having the halter put on and taken off. Also, he can’t get it caught on anything when he’s turned out. Leather halters are safer than nylon, which will not break.

Don’t use a lead rope to put pressure on a young foal’s neck by pulling on the halter. Instead, you can start teaching him to lead by guiding him along, while walking beside him with your left hand on his halter and your right hand over his back, and while someone else leads the mare directly ahead.

This is much safer than just letting the foal run loose, hoping he follows and doesn’t run off or get into something he shouldn’t.

Whenever you’re turning the mare and foal into a stall, corral or paddock, turn the mare to face the foal. Release the foal first before letting go of the mare. Having the mare facing her baby can help prevent her from accidentally hitting him if she jumps or kicks out when turned loose.

What to Expect During Foal Heat

Your mare will have her first estrous (heat) cycle about six to 12 days after foaling. Because it comes so close after delivery, this cycle is referred to as “foal heat.” It’s normal for her foal to develop diarrhea, also called “scours,” around this time.

The old theory was that this was caused by hormonal changes in the mare’s milk. Veterinarians now believe foal heat diarrhea is part of the foals’ natural development of normal intestinal flora and helpful bacteria.

Foal heat diarrhea may be watery and completely loose to semi-formed. It’s always important to closely monitor a foal with diarrhea, because it can be a sign of infection, but with foal heat diarrhea, the foal typically remains active, has normal vital signs, continues to nurse as usual, and does not usually run a fever. Your veterinarian can tell you if any treatment is necessary.

Foal heat diarrhea usually doesn’t last longer than a few days, but continue to monitor attitude and appetite during this time. You’ll also want to wash and dry the foal’s hindquarters daily and use a topical such as petroleum jelly, diaper rash ointment or topical wound spray to help prevent irritation.

Typically, a foal should have his first visit from the farrier at about one month of age. Unless there are specific limb/hoof concerns that need attention, he will normally need trimming approximately every four weeks.

“If the foal has any angular limb malformation, the farrier will want to start trimming before one month of age to aid in correction,” notes Sam Crosby, DVM, who has worked as sales veterinarian at Heritage Place in Oklahoma City since 1995 and maintains his own equine practice in Arcadia, Oklahoma. “On these cases, the farrier and the veterinarian usually work in conjunction.”

Foals are more susceptible than adult horses to infection by internal parasites, so they typically need to be dewormed at least four times during the first year of life. Veterinarians generally recommend the first deworming take place around two months of age. Talk to your veterinarian to set up a proper deworming program and to be sure you’re using dewormer products that are most effective against the foal’s main internal parasites. 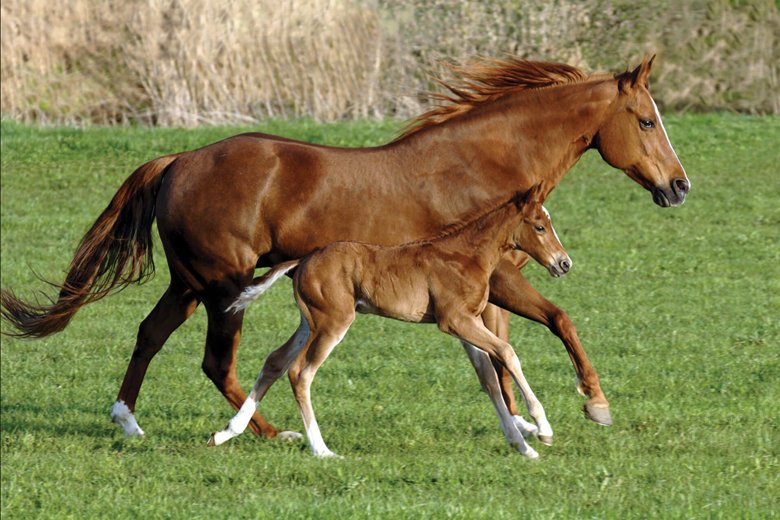 Your veterinarian will create a schedule of when to start the foal’s vaccination program and which vaccines should be given. Keep in mind that a foal needs a series of vaccinations to receive full protection. Those vaccines given during the foal’s first year of life help “prime” his immune system to respond properly.

Foaling Season Tip #1: Why Is My Foal Eating Poop?

This behavior, known as “coprophagia,” is common in young foals. It’s a normal activity that introduces bacteria naturally found in the environment into the foal’s gastrointestinal tract. It’s not usually a concern unless the foal ingests specific bacteria that causes gastric upset or infection.

When startled, scared or approached by a horse other than his mother,  a young foal will make rapid “chomping” movements with his mouth. This mouthing behavior is a form of submission, not unlike a puppy rolling on his back and exposing his belly. It’s the foal’s submissive way of saying, “Don’t hurt me!”