Many horse owners dutifully prepare their horses for traveling by wrapping legs with protective covering, checking that the trailer flooring is sound, and making sure their horses are securely tied–all with thoughts of protecting the health and welfare of their valuable cargo. However, few give much thought to a very important consideration–what can be done to protect their horse’s lungs? Transporting horses for long distances can be a contributing factor in the development of respiratory disease, which can last long after the trip is over.

Horses consume less hay and water while traveling, and when transported for extended periods of time, they can become dehydrated. Dehydration can impair pulmonary defense mechanisms that normally clear infectious material. Additionally, horses confined with their heads elevated have decreased clearance of infectious material simply due to gravity. Surfactant levels, an important substance in the lungs that helps prevent infection in the alveoli, also are decreased in horses transported for extended periods. The number of white bloods cells also increases after transport; however, these cells frequently are less effective at removing bacteria from the blood and airways. Trans-tracheal washes performed on horses after transport revealed an increase in bacterial numbers in the lower respiratory tract. Consequently, horses are exposed to higher numbers of bacteria in their lower airways at a time when their pulmonary defense mechanisms have been impaired by transport.

Other factors that contribute to the development of respiratory disease in horses being transported are environmental factors. Ammonia, particulate matter from bedding and feed, carbon monoxide, temperature extremes, poor ventilation, and overcrowding all play a role in damaging airways and decreasing resistance to disease.

The stress of trailering also contributes to disease. Blood cortisol levels are increased in horses after transport (cortisol is a hormone produced by the body in higher quantities during times of stress). Particularly at risk are young horses up to three years of age. Stress that has occurred prior to transport, such as weaning, showing, racing, or an endurance competition, can be an important factor, as well. A horse which already is mildly dehydrated and stressed prior to being loaded in a trailer might not have adequate reserves to deal with added exposure and the stress of a long trailer ride.

The severity of respiratory disease associated with transport can vary from mild upper airway inflammation to severe, life-threatening bronchopneumonia or pleuropneumonia. The primary bacteria to which horses are exposed during transport are Streptococcus species and those in the Pasteurella and Enterobacteria families. Respiratory viruses include influenza and rhinopneumonitis. Horses coming from show, race, or sale environments might be exposed prior to being loaded, then develop disease secondary to transport.

Horses should be monitored after transport for the development of respiratory disease. Signs to look for include cough, nasal discharge, fever, depression, and decreased appetite. Call your veterinarian if your horse develops any of these signs. 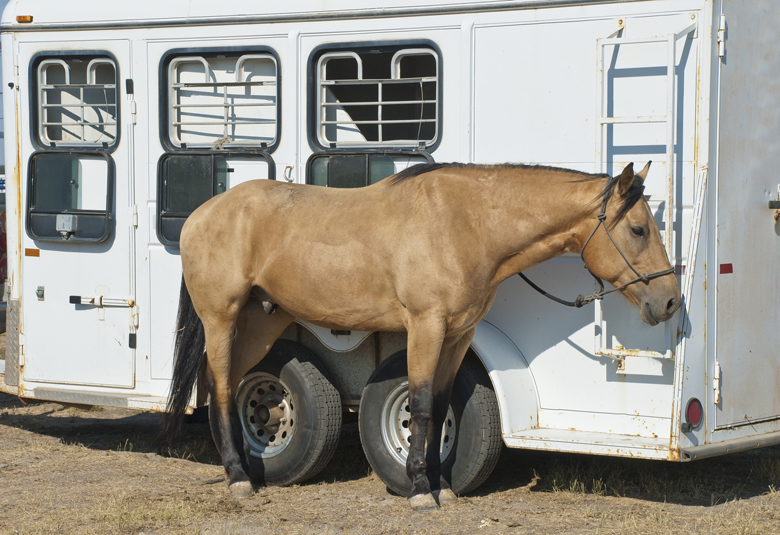 Good management and transport procedures will help minimize your horse’s risk ofdeveloping respiratory disease. Thorough cleaning of trailers and vans between loads of horses will help prevent the transfer of bacteria and viruses among different horses and decrease the overall number of infectious organisms to which horses are exposed. Allowing horses short rest stops during a long trip will help boost their defenses. Resting at least once in a 24-hour period is an absolute minimum; however, more frequent stops of every six to eight hours are good for you and your horse.” Horses should be unloaded at these stops, given access to hay and water, and encouraged to lower their heads. Inadequate trailer ventilation will allow infectious and particulate material to build up in the air, as well as contribute to overheating. Dusty hay and bedding, especially with small leaves or shaving size, should not be used in a trailer because of the particulate that will blow around when the trailer is moving. Moldy hay also adds particulate and allergenic material to the air in your trailer. Be sure to clean all hay out after trailering to prevent moldy hay on the next trip.

Vaccination plays an important role in preventing influenza and rhinopneumonitis. Boosters should be given every 60-90 days to horses which are at high risk to exposure, and horses should be current on vaccinations within 10-14 days of embarking on a long trip.

Horses do not fully recover from long distance transport for several days. Accordingly, a period of rest following prolonged trailering will allow a horse to recover and regain full immune function. This rest period is even more critical in those horses which were stressed prior to being transported. During this rest period, you still need to monitor your horses for any changes in attitude, appetite, or the development of a nasal discharge or cough.

Although horse owners cannot control all elements, keeping in mind these few guidelines will help diminish the chance of respiratory problems developing in your horse after tranportation.

Andrew DeNome, DVM, is a 1996 graduate of Washington State University, currently living in Oakdale, Calif., and he is affiliated with Pioneer Equine Hospital.