Horses have binaural hearing, meaning they hear out of both ears at the same time, the same as people and most other animals. However, unlike humans who have small, flat ears, horses have large cup-shaped ears. These ears act like a satellite dish to capture sound waves and funnel them to the inner ear. Because of this, very little sound is missed and the horse might hear noises that you can’t. This is one reason why horses may spook for what seems like no apparent reason. Often, they may have heard something that you didn’t.

A horse has the ability to hear a wider range of high-frequency tones. As a prey animal, hearing acuity is a necessary form of an “early warning system” from predators. Since predators rarely vocalize when stalking prey, horses learn to carefully listen for any sounds that mean a predator could be approaching – the snap of a twig, the rustle of grass. These noises contain the high-frequency sounds that your horse can use to locate the direction from which the predator may be coming.

Once the horse has determined if danger is in the area, it’s time to react. Horses have a strong emotional response (fear) to whatever sensory input they receive. This fear triggers a horse’s flight mechanism for safety. Horses aren’t brave – they won’t remember that you are sitting on their back or standing in front of them. Their only concern is survival – run first, think later.

Male horses may react more strongly to sound simply because they’re traditionally the herd watchdogs. They don’t necessarily hear any better than females but they feel a need to alert “their” herd to perceived danger. That’s why some horses suffer more anxiety than others at shows or in a new environment.

You can help reduce your horse’s ability to take in these reactive noises by using earplugs or wads of cotton. If that’s not possible, keep alert to your horse’s ears to avoid a possible spook. His ears will signal where attention is directed –  If you can direct his attention elsewhere, you can usually avoid the spook. 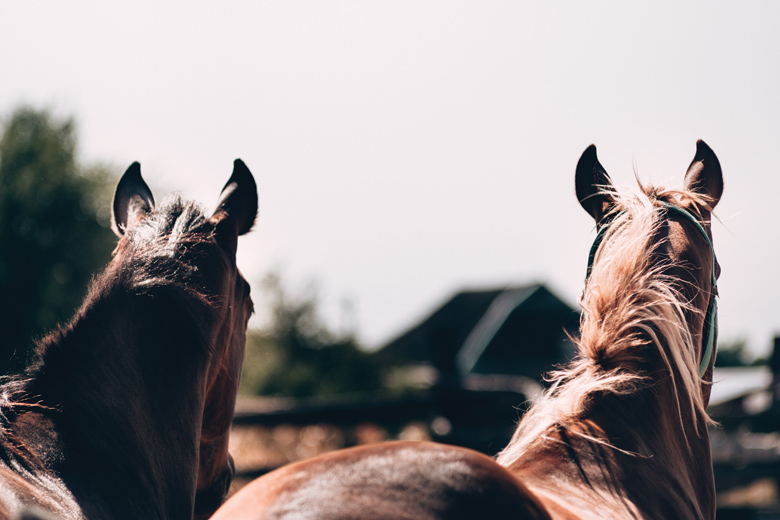 Like humans and other animals, horses can lose their ability to detect sound as they age. Age-related hearing loss in horses can begin at age five, starting with higher frequencies and working down the scale. High-frequency hearing loss isn’t generally obvious in horses until they reach about fifteen. But because horses have a wider range of high-frequency hearing than humans, they can lose more of it before it is noticeable.

Practice good ear care by checking your horse’s ears weekly for signs of insect infestation or infection. Redness, scratching, or hair loss on the ear could indicate rubbing. If you suspect a hearing problem in your horse consult your veterinarian. If your horse already has hearing loss, you’ll need to make some management changes for safety. Always speak to your horse as you approach, so you don’t startle him. And be sure he heard your approach warning by watching the direction of his ears. One or both should flick toward you.

Understanding how your horse’s hearing and reaction to sounds differ from humans can help you anticipate and reduce your horse’s anxiety and avoid a dangerous reaction.

Courtesy of by Classic Equine Equipment