The simple answer is extremely severe laminitis. Though, for most horse people, including some farriers and veterinarians, use the words ‘laminitis’ and ‘founder’ interchangeably and synonymously, they really aren’t. The difference is like ‘all compound fractures involve a broken bone, but not all broken bones are compound fractures.’ There are many different symptoms diagnosed as ‘laminitis’ that are not ‘founder,’ but all instances of ‘founder’ have ‘laminitis’ issues. 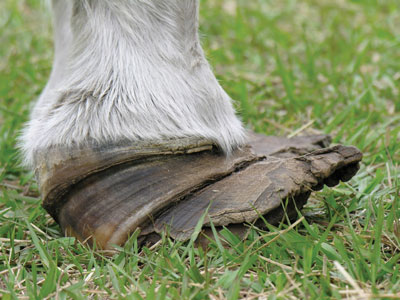 Laminitis is basically inflammation of the laminae. There are approximately 600 pairs of interleaved tissues, referred to as the ‘laminae,’ which connects the coffin bone to the hoof wall and helps cushion it in normal use. Laminitis can be virtually anything involving the hoof wall (inside or out), starting at the cornet band and down, with signs of inflammation of the laminar bond.

Whereas founder more specifically requires the ‘separation’ of the coffin bone from the hoof wall, which can then rotate causing drastic pain and absolute lameness. As Dr. David Davenport, DVM, MS, MS, CNS pointed out, “Founder is at the far end of the spectrum known as ‘laminitis.’”

The reality of what causes founder remains the same, as do the ways to avoid, prevent, and in most cases treat it. In all cases of ‘founder’ the hoof wall separates from the laminae, which can then allow the coffin bone to separate from any support, or attachment sites within the hoof, and then rotate. Too much rotation can become crippling.

If there isn’t a specific physical injury damaging that area, then laminitis is often caused, or perpetuated, by a decrease in blood flow to the laminae (the hoof wall and connective tissues within the foot). If there is a lack of blood for too long, the health of the hoof will be in jeopardy; the laminae can begin to die and separate (from the coffin bone) if the blood flow is inhibited for too long. That is the beginning stages of founder. With a detached laminae, the coffin bone might then rotate, essentially crippling the horse, this would be known as a severe founder.

Once the hoof wall begins to separate, rotation of the coffin bone becomes likely, depending on how (method and speed) it’s treated. This causes discomfort, which turns to extreme pain, and the slightest weight on that hoof is avoided. Horses can then become unable to walk, or walk as if they are on egg shells (in obvious pain). That’s why catching it quickly is so important, and getting the proper treatment is vital to any chance of treating the problem. In severe cases, when the coffin bone has rotated too far, it can push clear through the sole of the hoof, which usually results in no feasible treatment. Ultimately the death of the horse by euthanasia; because treatment is either way too costly or otherwise impossible at that point.

The reality is by the time most horse owners notice there is a problem (especially with the acute cases) the damage is already in process. Getting it stopped, and reversed (when possible) becomes the challenge. We’ll get to that later, but AVOIDING IT is often the best medicine! That is usually pretty easy, once you understand the causes… and watch your horses weight, health, and general motion.

There are generally three different ‘types’ of founder:

Each of them can usually be avoided… and can be either ACUTE(here, now, serious, urgent) or CHRONIC(daily, could be serious, requires awareness, and management)

Grass Founderis most common. ANY horse can grass founder by eating too much grain or grass high in fructans (or non-structural starches). It is not always related to EMS (equine metabolic syndrome), but horses with EMS are more prone to laminitis/founder than otherwise healthy horses.

This disorder is often characterized by insulin resistance. Horses with this type of founder usually have a high concentration of insulin in their blood stream (hyperinsulinemia… which is similar to type-2 diabetes in people). Also important, researchers have shown that injecting horses (and ponies) with high doses of insulin CAN INDUCE LAMINITIS in horses that aren’t insulin resistant. Blood tests CAN determine if a horse is insulin resistant, and thereby help determine how much potentially there is to issues, boosting awareness and avoiding future issues more easily.

Acute cases of Founder tend to happen more often with horses that were ‘kept in’ for the winter, and turned out in the spring without any real or effective restrictions on what they eat in the pasture.

It’s important to understand that non-structural STARCHES are the problem, because horses are ‘rapid digesting,’ they quickly convert starches to sugars… which can spike the blood sugar levels, especially in animals with insulin regulation issues.”

‘Slow digesting’ starches (structural starches, aka FIBER) are generally not a problem, as they take longer to break down within a gut, and are considered low-glycemic, which provides the body energy without spiking the blood sugar levels. Unrestricted access to excessive amounts of non-structural starches are what is the most common cause of ‘Grass Foundering.’

Common grasses found in most pastures, store energy to help with their own growth cycle, survival and seed production. Energy is a form of starch. The ‘structural’ starch generally isn’t the problem, it’s the ‘juice’ and ‘meat’ inside the grass that is ‘non-structural’ and can be the problem when a horse eats too much. However, founder can also, happen when horses are fed too much non-structural starches from grain or treats.

See our next issue to learn more about Founder, ways to prevent and treat it. Or you can skip ahead by going to: http://vetsupplements.com/founder/