Spectators poured into the Del Mar Arena this evening for the most anticipated night of Dressage Week – the Evening of Musical Freestyles Presented by Mossy Automotive Group. The event consisted of two main classes, the FEI Freestyle Test of Choice Sponsored by Beverly Gepfer Foundation and the G-2 Software CDI-W Grand Prix Freestyle. 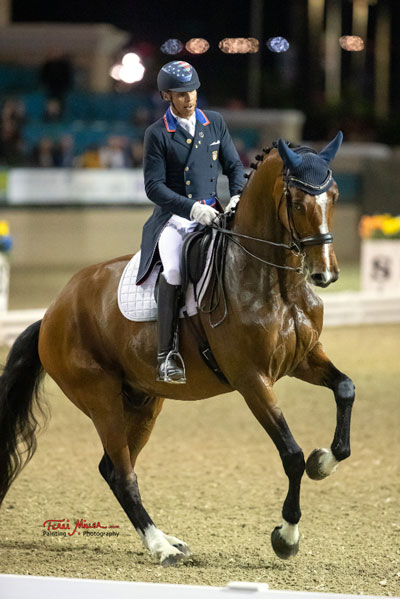 Kavita Aurora started the night off by singing the National Anthem, with the FEI Freestyle Test of Choice Sponsored by Beverly Gepfer Foundation immediately following.

Barbara Breen-Gurley got the class underway with her own Vindicator, a 17 year-old KWPN gelding. Breen-Gurley and Vindicator earned first in the same class last year with a 66.625% and entered the arena tonight with the intention of making it back to back wins. The team effortlessly performed in front of a captive audience. Their half passes at the trot were beautifully executed with well timed music changes and transitions. They had a slight moment of being off balanced at the passage at A, but had a very well put together test with light, airy music for a score of 66.475%. 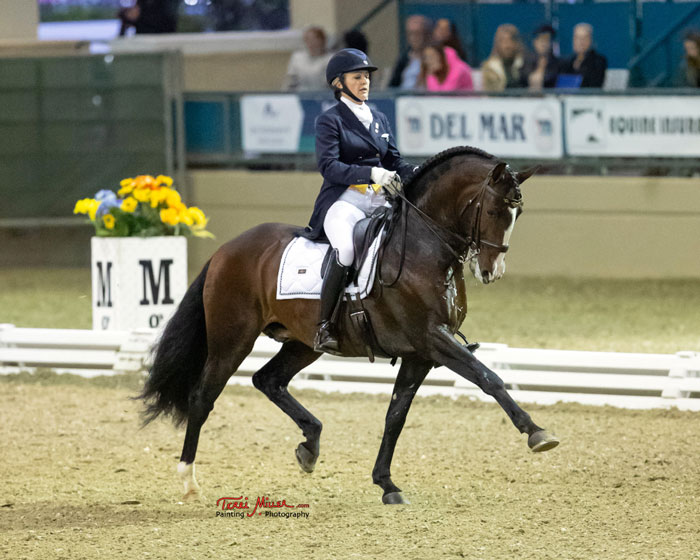 Sarah Christy and Zamorin, a 15 year-old Lusitano gelding owned by Linda Alexander, entered the arena next. The test started out to heavier music than we heard from Breen-Gurley and Vindicator, that matched the bay’s bold movements, the music then eased into an instrumental mix and back for a nice combination for the audience. They took over first place in the class with a score of 68.175% 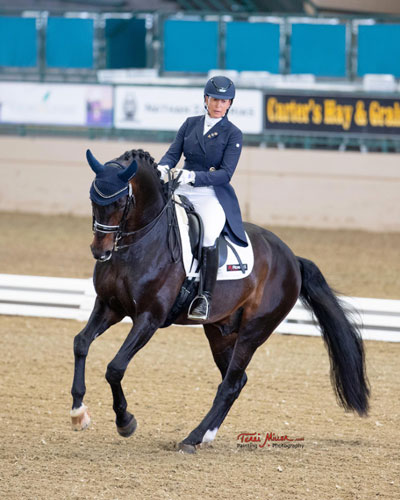 Third in the arena was Xerifino with his owner, Allison Mathy. The 16 year-old Lusitano stallion and Mathy performed to to a soothing string instrumental mix. Their extended trot was complimented by the audience with applause, floating down the centerline to halt to conclude their test. Again, the class ranking turned over, and Mathy and Xerifino moved into first place with a score of 68.450%. The final rider to compete was Patty Mayer and Cato, a KWPN gelding owned by Bailiwick House Inc. Cato was unsure about heading in the arena, but completed their test for a score of 64.375%. 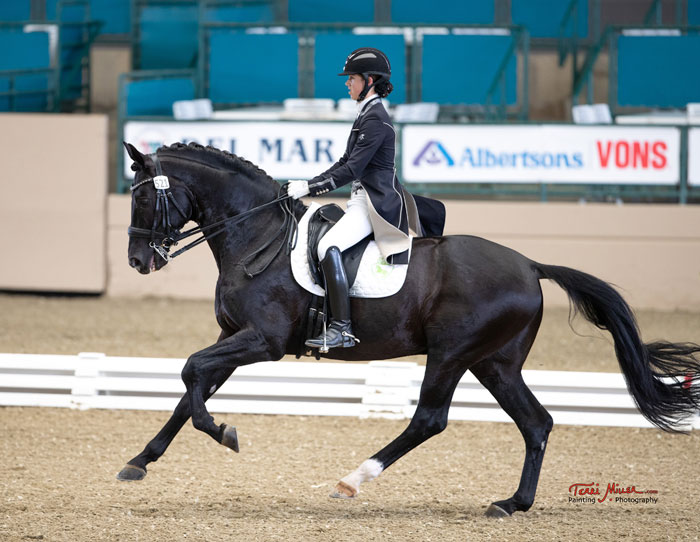 “The Del Mar National is my favorite horse show and I am so happy to have my two Lusitano stallions here this week,” said Mathy. “I’ve always wanted to show a freestyle under the lights and Xerifino gave me the opportunity. He is such a showman and loved the energy from the audience. He felt fantastic and I was so happy to show him off at such a special horse show and venue. I really appreciate the judges awarding his enthusiasm.” 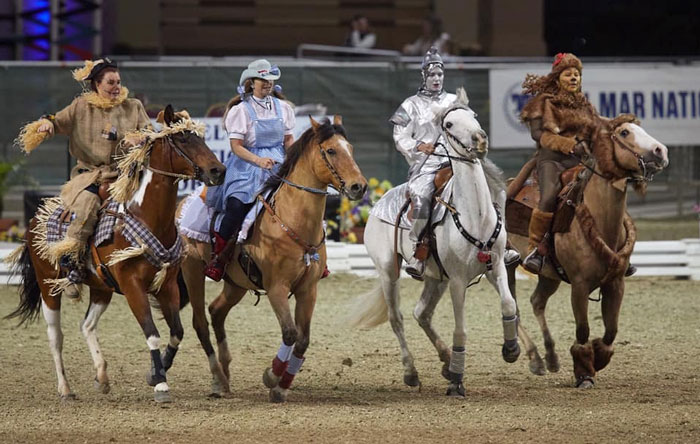 The crowd enjoyed watching the Mane Event Drill Team in between freestyle classes. The drill team put together an act for the audience that was to The Wizard of Oz, complete with matching outfits and commentary!

The G-2 Software CDI-W Grand Prix Freestyle saw four riders, with Steffen Peters and Suppenkasper beginning the class with a bang. The 11 year-old KWPN gelding, owned by Four Winds Farm, and Peters were calm and collected during their test, setting the stage for a tough score to beat. The pair won the class last year with a score of 77.8%. They are preparing to head to Europe for more qualifiers and their confidence tonight was apparent. A highlight of their test included a beautiful pirouette to piaffe to extended walk, with each transition smooth and crisp. Two weeks ago they received their highest career score for the Grand Prix Freestyle of 79.95% and tonight they continued with personal records, earning a career high of 80.990%!

Missy Gilliland and Samaritano IX, a 19 year-old P.R.E. stallion owned by Phillip Merrill were second into the arena. They had an exhilarating finish to their freestyle, with a canter extension down the centerline to a square halt to finish their test. They earned a respectful 69.050%.

Third to go was another San Diego native, Nick Wagman and the 15 year-old Dutch WB gelding owned by Beverly Gepfer, Zenith. Unfortunately they had a difference of opinions at the beginning of the test on whether or not they should even go into the ring, but recovered for a nice score of 71.865%. Terri Rocovich and her own Uiver, an 18 year-old KWPN gelding closed out the Evening of Musical Freestyle competition. This was Rocovich and Uiver’s sixth year competing at Del Mar National at the Grand Prix level and they earned a 68.815%.

Peters earned his seventh win since 2011 in the CDI-W Grand Prix Freestyle at the Del Mar National Horse Show, holding the record for most wins at the event.

“It was an amazing night, especially after so many wins to have Steffen best his previous scores,” said Division Show Manager Regina Antonioli. “It’s really special that Steffen beat his previous career high right here at his “home arena” at Del Mar. It was a wonderful class.”