Ryder Wright has been on a mission to win his second saddle bronc riding gold buckle. He’s on the cusp of accomplishing that.

Wright won his fourth go-round of the 2020 Wrangler National Finals Rodeo with an 88-point ride on Andrews Rodeo’s American Hat’s Positive Times in Round 8 at Globe Life Field, Dec. 10.

“That was an awesome horse,” Wright said. “Sammy Andrews, they bought that horse from New West Rodeo last year. I have a little history with that horse. He bucked me off at the NFR last year; made pretty short work of me. I’m glad they changed his name. Changed the luck.”

Hughes, who placed in five of the first seven rounds, proceeded to win Round 8 with a 7.4-second run Thursday.

“I’ve been planning this moment since I was a 4-year-old kid in my living room,” Hughes said. “I’m living the life and just thankful to be here. I can’t thank the people enough who have helped me get here.”

“Tonight, I wasn’t roping for the average and I ran at the barrier,” Hughes said. “I had nothing to lose and it just worked out. My horse worked great; it was a great set of cattle. If you’ve got a good horse, a good calf and you can do your job, it’s supposed to work out.”

He was quick to credit some mentors who have helped get to this point.

“Tyson Durfey, Adam Gray, Marty (Yates) have helped me,” Hughes said. “Really, everyone, this whole set of guys are a great set of guys. I’m very honored to be here competing alongside them.”

Jess Pope has been solid in his Wrangler NFR debut. After Round 8, it got even better.
Pope won the round with an 89-point ride on Calgary Stampede’s Xplosive Skies.

“It’s pretty awesome,” Pope said. “I lived and dreamed of this my whole life. I had a goal coming in here to ride to the very best of my ability and be as consistent as I could possibly be. I’ve just been taking it one round at a time.”

Kaycee Feild won Round 3 on Xplosive Skies. Pope had an 86.5-point ride on the horse in the short round of the Fort Worth (Texas) Stock Show & Rodeo, Feb. 8.

“It was just like it was in Fort Worth,” said Pope, 22. “She’s really electric and has a lot of drop. It’s a gun fight from the nod go. She’s whacking you in the back and you have to just let your feet go and just trust your instincts because if you start thinking about it while you’re riding you get behind. It’s all off muscle memory, and that’s what we train for day in and day out.”

Pope split second in Round 1, was fourth in Round 3, split fifth in Round 4 and split third in Round 7. He’s first in the average with 681 points on eight head and fifth in the world standings with $132,029. 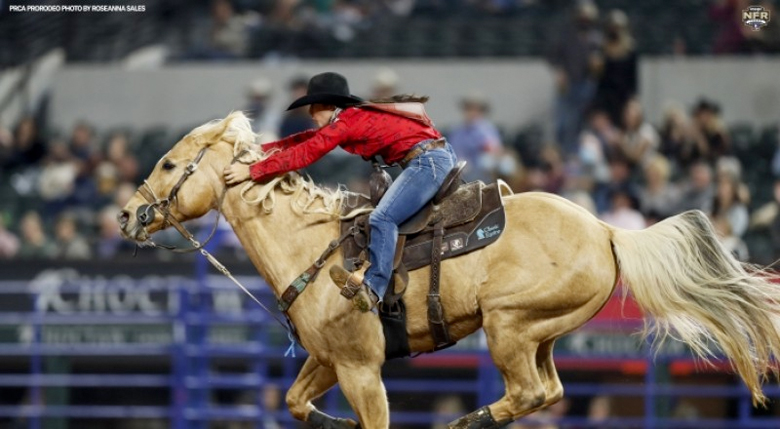 Steer wrestler Blake Knowles is out of the average mix at the 2020 Wrangler NFR, but he can still win rounds and cash checks.

The Oregon cowboy won his second go-round of this NFR, clocking a 3.6-second time to take the Round 8 title. Knowles also split the Round 1 victory with a 3.9-second time.

“He’s awesome, Tyson, owned by Curtis Cassidy, was horse of the year,” Knowles said. “He just allows you to make a plan for yourself. He’s going to give you the same thing every time, which is stand there, run extremely hard to the steer and get your feet on the ground with a chance to win something.

“I watched that steer, this was the third night of these steers. They actually hadn’t had a lot of luck on him yet. Just by chance they hadn’t, some bad-luck kind of deals. I’d watched that steer at other rodeos throughout the year. He looked really good. I wasn’t stomping my hat when I had him. I knew there was probably a chance there to have some luck.”

“I think you have to (take some chances),” Knowles said. “There are still two more steers to be run. You never know what can happen. Throughout this whole thing, you’re always making a strategy for yourself. When you get here the strategy is just try to win first every night. And as this thing progresses, as a competitor, you have to make new plans. Right now, my only chance is to try to win as much money as I can. I hope it doesn’t happen, but if guys have some bad luck and I bump up there and maybe catch something in the average, if you win enough in the rounds, you just never know what can happen.”

The 2020 Wrangler NFR has been one of extremes for team roping partners Colby Lovell and Paul Eaves. In the first seven rounds they had four no times, placed second in Round 2 and third in Round 6.

On Dec. 10, they captured the Round 8 crown with a 4.3-second run. It was Lovell’s inaugural NFR go-round win.

“I did a better job of slowing down and making a better run and not getting caught up in the week,” the soft-spoken Lovell said.

“We had a good steer and were able to use him,” Eaves said. “It was nothing different, and that’s what we try to do, but bad luck here and there, and stuff will happen. But it all worked out.

“Colby did a good job, the header does so much of it. To read the barrier, turn and handle them, the whole thing, it was perfect.”

Lovell was thrilled with the result.

Ty Wallace and Roscoe Jarboe split the Round 8 win in bull riding.

The ride was another chapter in Wallace’s amazing Wrangler NFR.

“I was pretty excited about that bull (his first bull, Chiseled), and it was pretty suspenseful since all my buddies were rooting me on and I just watched Roscoe and Jeff (Askey) go, and then it came down to me, the last guy,” Wallace said. “You don’t ever want to mess one up like that, he’s dang sure rank and you don’t want to stub your toe, and I had some bad luck right out of there. But you’ve got to put that behind you, and they ran another bull in there (Soy El Fuego), and it just worked out. That bull was right there around the left and had a lot of suck back and kind of wanted me on his head, but I was able to get under my rope, and it worked out.”

“I try not to think about that stuff,” Wright said. “You don’t want that stuff getting in your head. Try to just go out there and do what I’ve been doing all year. One horse at a time and one jump at a time. Hopefully it works out in my favor.”

Ryder’s twin brother, Rusty, was second in Round 8 with an 85-point ride, and their younger brother Stetson split third with an 86-point trip.

Barrel racer Haley Kinsel has had a dominating performance at the 2020 Finals.

It got even better Thursday.

The Cotulla, Texas, cowgirl clocked a 16.56-second run, a WPRA record on a standard pattern.

Kinsel broke her own WPRA standard-pattern record of 16.63 seconds that she set earlier this year in Dodge City, Kan.

“Doing it at Dodge City was a crazy deal this summer,” Kinsel said. “I had a not-so-great July, I had hit or miss runs. I kind of put the hammer down on my prep and my horse (Sister) followed through. She’s had a great week, she’s been spot on.

“My plan was to go do the same thing we’ve been doing, just solid runs, smooth and put her in her place. But she was a little more there tonight, so I had to step up and be there because she’s going to meet me everywhere I am. So, I had to make sure I was confident and ready for her. Things were a little bit tighter and a little bit faster, and I had to stay with her. She just met me every time. I’m not surprised she can do it; I’m surprised she does it for me.”

Kinsel talked about the traits that have made Sister special at Globe Life Field.

“The first several rounds she was getting better and better,” Kinsel said. “And when I shuffled to the bottom of the ground, I decided it was as good a chance as any to get off her. … I was hoping that these higher-up runs – being third out tonight and first out tomorrow – I’d have better shots. So, I wanted her fresh for that, so I’m thankful I got off her (Wednesday) and was able to make that choice for her and had some horses who could take that for us, and she could have a rest. She proved to me she was grateful.”

Kinsel leads the world standings with $234,845 and has earned $156,385 in Arlington, which has her leading the RAM Top Gun standings. The Top Gun Award goes to the contestant who wins the most money in any single event at the Wrangler NFR.

Kinsel is first in the NFR average with a 137.26-second time on eight head.
“I was second out and the second score on the board, so I just had to sit out and wait for Ty,” Jarboe said. “I knew he had Chiseled and would most likely be 94 (points). But he had some bad luck in the bucking chute, then he drew good in the re-ride and split the win with me.

“I was 93 (points) on Magic Poison in Dodge City, and it was the highlight bull ride of my career and I got to do it again tonight for 89.5. It was the same bull, and the first time I got on him he was 100 mph around to the right and faded out through the arena. I got up and was on the other side of the deliveries and couldn’t think of anything to compare it to, it was awesome.”

Wallace said winning a round on a re-ride is a challenge.

“You’re tied, you’re sweaty, it’s hot and you’re the last guy out and all the pressure is on you because everyone is hurrying you and you’re trying to take a breather because they’re trying to do a production too,” Wallace said. “But you have to take a deep breath and just go through the motions and not to let those guys get in your head because it’s pretty easy to get distracted.

“I’m just now starting to have fun and we’re almost done. I’m just glad to be here and have the opportunity in this building and for the production and everyone who helped put this on. It means the world to us. This is life-changing for me to come here and do as well as I did and set myself up.”

Courtesy of the PRCA