Few things in nature are more inspiring than new foals frolicking around their mothers on a crisp spring morning. The fact that a foal can be up and running within short hours after birth is but one in a long series of miracles. Conception is miraculous in itself. Development in utero, in the womb, begins with the formation of all of the organ systems and is followed by the maturation of them. During the entire process, the foal is completely dependant on the mother’s blood supply for eating, breathing and eliminating metabolic waste products. Many of the organ systems function differently in utero than they do after birth. Parturition, orbirthing, initiates changes in the heart, lungs, liver and urinary bladder which must occur almost instantly. These changes are essential for adaptation to life on the outside. 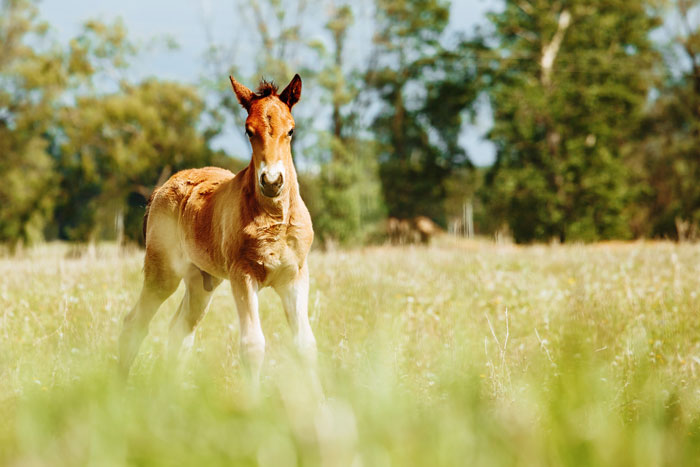 Fortunately, things proceed normally almost all of the time. Foals have survived the cold, cruel world much longer than there have been foal-watch teams to worry about them. However, how do we know when things are not right? What are the signs? What can and should be done? In order to understand how things can go wrong, it is important to review the normal physiological processes taking place around the time of birth.

When we watch horses, young or old, running free on a glorious day, we seldom think of all the processes that must take place for oxygen and energy to fuel one of God’s most amazing athletes. It may not seem obvious, but when the foal is still in utero he does not breathe or eat. The blood supply flowing to the mother’s uterus, or womb, is very close to that of the foal. Oxygen and nutrients are transferred directly into the blood supply of the developing fetus through an elaborate system of membranes called the placenta. This is attached to the foal through his belly button, the umbilicus. In addition, there are shunts, little detours which direct blood away from the lungs and liver, since these organs are not needed until the beginning of life on the outside. Immediately after birth, these shunts must change to allow normal function of all body systems. Cardiovascular (heart, lung and blood vessels) changes occur first and the blood is instantly directed to flow through the lungs so they can inflate, absorb oxygen and expel carbon dioxide.

Other changes involving the liver, urinary bladder, intestinal lining and immune system occur in the hours after birth and are critical to survival. The channel between the bladder and umbilicus, the urachus, is normally closed at birth so urine starts flowing through the appropriate pathway. The intestinal lining, or epithelium, remains very porous during the first six to eight hours of life. This allows absorption of some very large molecules called antibodies ingested in the first milk, or colostrum. This provides immunity from bacteria, viruses and other potentially life-threatening infectious diseases. The “passive immunity” is essential for the life of the foal until his immune system matures and he is capable of making his own antibodies through “active immunity” at about six months of life. For this reason, foals are not routinely vaccinated for most diseases before about six months, as they may not be capable of producing an immune response to “shots”. If the mare is vaccinated about 30 days prior to her “due date”, she will pass the immunity on to her foal when he nurses the colostrum during the first day of life.

Appreciation of the transition between prenatal life in utero to neonatal life on the outside helps us understand processes present when things go wrong. When a foal becomes ill, many of his body systems want to revert back to the warm, safe confines he had in the “mom”. However, the prenatal function of most organ systems is not compatible with life on the outside. When the normal physiological role is absent, the invasion of bacteria, viruses and fungi can cause illness in foals. The term “neonatal septicemia” describes foals with a serious infection in the blood stream.

In sick foals, the metabolic retreat to prenatal life can occur rapidly, within just a few hours. The passage that allows blood to flow through the lungs begins to close so respiratory symptoms are common in “at risk” foals. Among the first symptoms noticed are cough, runny nose, high fever and lethargy. The urachus opens again, urine dribbles from the umbilicus and “my colt is peeing out his belly button” is an alarming report. Gastric ulcers are also seen in these patients, and may cause rolling, teeth grinding and increased salivation. Some foals with gastric ulceration may roll up next to a fence or wall so they are lying directly on their back with their feet in the air. In addition, the shunt at the liver is closed again, and metabolic waste products that are normally cleared from circulation by this vital organ begin to increase in the blood. This build-up soon becomes toxic, the life-sustaining mechanisms cease functioning and other potentially fatal events arise.

There are several things that suggest the foal is at risk for developing neonatal septicemia. Some of these can be quite subtle, so a “well baby exam” during the first day of life by a veterinarian is strongly advised even if everything looks OK. Foals that fail to stand and nurse within two hours, or have urine dribbling or swelling at the umbilicus are suspect. In addition, joint swelling, extreme lethargy, sometimes indicated by general weakness or “floppy” ears are also cause for concern. (It is interesting to note that before the foal can stand for the first time, he must have good control of his ears.) Diarrhea, cough, nasal discharge and fever (a temperature over 101.5) suggest the presence of serious problems. Lethargy can be difficult to assess, as a normal foal will exhibit a cycle of nursing, playing and “power napping” throughout the day. However, a foal that is not easily aroused by human or maternal stimulus or has any of the other symptoms mentioned here, should be examined by a veterinarian immediately. 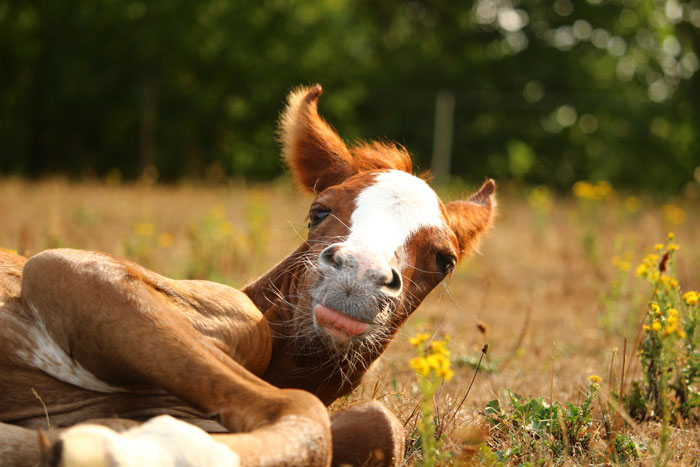 Normal nursing behavior is the most important indicator of good health. Failure to stand and nurse normally within two hours after birth, or wandering around the stall “nursing” foreign objects are clear indicators that the foal is in trouble. As the typical mare produces about 4 gallons of milk per day, a foal needs to nurse frequently to ingest this volume. The new foal should be observed closely to be certain that he actually has the teat in his mouth. Even though the foal’s head may be seen under the mare’s flank and sucking noises heard, sometimes he still has not “latched on”. The presence of milk on the newborn’s face is an indication that he may be getting close, but not actually nursing. This should be cause for concern. If the mare’s udder is being nursed regularly, the teats will look clean and be pointing downward or directed north and south. If the foal has not nursed, the teats may have crusty debris still present on the surface and they may point southeast and southwest, an indicator of a full udder. Normal nursing is repeated in episodes lasting fifteen to thirty seconds or longer. Nursing activity for three or four seconds is not adequate, and assistance is warranted.

As the gut remains porous for the first 12 to 24 hours to absorb antibodies from colostrum, these holes can also allow the passage of bacteria. This is probably the beginning of sepsis, or infection in the blood rather than the old wives’ tale of it coming from the umbilicus, traditionally called “navel ill”. The presence of milk in the intestine triggers the mechanism which closes the large pores in the lining and allows normal absorption of water and other nutrients. The closure of intestinal pores will guard against the introduction of bacteria into the blood stream, and the antibodies present afford protection against those that may have tried to sneak in uninvited.

Premature births are relatively uncommon in horses, but as is the case in humans, present severe challenges to survival. Although the normal gestation, the length of pregnancy in a mare is 345 days (the average is 333 to 357 days), some foals prefer their own calendar. Regardless of the duration of pregnancy, foals with a short, velvety hair coat, little body fat or severe weakness are by definition dysmature, and at risk for septicemia. This is more common if the gestation is “too long”, than if it is “too short”. Although we may be tempted to induce labor in pregnancies exceeding four hundred days, this is very seldom advisable, as these foals aren’t “done” yet.  Forcing their delivery will commonly result in a dysmature foal. Time sufficient for the maturation of all body systems is imperative for neonatal survival.

The production of surfactant, a substance that allows the lung to inflate properly, is among the last components to mature in the prenatal horse. This miraculous compound reduces surface tension in the alveoli, the microscopic spaces in the lung that are the location for exchange of oxygen, carbon dioxide and other gases. When you blow up a toy balloon, you will notice that it is fairly difficult in the beginning. However, at some critical point, it gets easy. This is what surfactant does in the lungs; makes it easy to inflate the alveoli. Once the lungs are properly inflated, the foal is absorbing oxygen and life without the placenta is possible. Dysmature foals often lack adequate surfactant, and severe respiratory problems with septicemia are common.

The amazing phenomenon of new life usually proceeds without difficulty. However, if a foal presents with any of the symptoms discussed here, veterinary attention is advised. Most of these cases should be treated as an emergency, so waiting for normal office hours is seldom an option. Many at risk foals can be saved with some simple mare-side techniques that can avoid major problems later. Above all, when in doubt, call your veterinarian.