Rabies. The word conjures up chilling images from old movies: a snarling dog, foaming at the mouth, attacking anything that moves. But did you know horses are very susceptible to this disease?

Skunks, foxes, bats, and raccoons are the main wild animals that transmit rabies. These all live in habitats bordering horse farms. Wild animals with rabies behave abnormally, and may boldly approach a large animal they would normally steer clear of.  Or, a curious horse may approach and nudge a sick rabid animal who does not run away.  Either way, the horse can be bitten, and a single bite can transmit enough virus to be fatal.

The incubation period for the virus is variable (2 weeks to several months), but relentless.  Once a horse shows signs of rabies it invariably dies within a few days. Early signs range from colic to lameness to depression to agitation. Late signs are dramatic; horses either become recumbent and unresponsive, or dangerously aggressive. There is no treatment.

Contact of skin or mucosa with the horse’s saliva could transmit the disease.  Public health regulations mandate rabies testing be carried out by the attending veterinarian in any instance where humans have been exposed to an unvaccinated horse showing sudden, progressive neurologic disease.  Testing for rabies is an expensive, dangerous and disturbing process requiring the veterinarian to first remove the head of the deceased animal, then submit brain tissue to the state health authorities. If the results are positive, any people who had contact with the sick horse’s saliva must undergo post-exposure rabies vaccination. 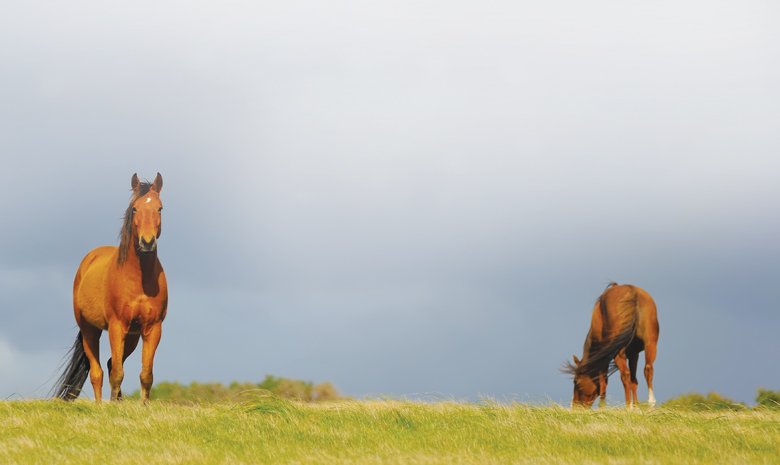 Over a 19-year period, New York State reported 51 cases of horse rabies. I was involved in diagnosing three of them. All were fatal. All were very different; illustrating that rabies can “look like anything.”

The first case was a mare living in a pasture bordering a wooded area. Her owners called, saying she was “bellowing like a pig” and acting strangely. When asked about her rabies status I was told she had never been vaccinated.

On arrival I found the mare in a pen. Long ropes of drool dripped from her mouth. She was tossing her head, flinging saliva everywhere. She had chewed a large hole in one leg through the skin (presumably where she was bitten). Her aggression was terrifying- she would attack anyone and anything that came near her. Strongly suspecting rabies, I convinced the family to put her to sleep. Subsequent testing confirmed the disease. The family members and I underwent post-exposure immunization.

Case number two was very different. This horse was seen at a routine appointment because she just wasn’t right. I did a physical exam and found nothing major other than a mild fever and a dull attitude. I opened her mouth during the exam and handled her tongue and gums. I took some blood and prescribed anti-inflammatories. Overnight the mare lost the ability to swallow and became wobbly. She was sent to Cornell for advanced care, but her conditioned deteriorated and she became recumbent. She was euthanized. She had never been vaccinated for rabies and was found positive for the disease. More than 20 people from the farm and Cornell required post-exposure treatment, including me.

The third case involved a 3-year-old Quarter Horse gelding experiencing difficulty walking. The horse had a fever, showed incoordination in his hindquarters and behavior suggestive of colic. Over several hours of observation his signs varied-he would fall down and act painful and wobbly, get up and act semi normal, then repeat the cycle. Over time, his condition declined and by evening he became recumbent. We queried his vaccination status and were told that he was purchased from someone out west who “gave him all his shots”. More questioning revealed that he had never been vaccinated against rabies because it was not considered a problem disease in his state of origin. The horse was euthanized that night and confirmed rabid the next day. Eight people had handled the horse (including me and our practice intern) and all required post-exposure treatment.

If there is a bright spot in this story, it is that modern vaccines are very effective in providing rabies immunity. The outcome for the horse in the photo bitten by the skunk was a happy one—the horse had been vaccinated annually for rabies, so a post exposure vaccine booster dose was the only action needed to keep the horse healthy. The American Association of Equine Practitioners (AAEP) lists rabies as one of the “core vaccines” that should be given to all horses. Current recommendations are to begin immunization when a foal reaches 4-6 months of age, then follow with a booster dose in four to six weeks if the foal’s dam was vaccinated prior to or during the pregnancy. Horses should then receive boosters at annual intervals. Broodmares should be vaccinated four to six weeks prior to their delivery dates. Most state health departments mandate that the vaccine be given by a licensed veterinarian who will keep detailed records on the immunization history of the horse. The full AAEP guidelines for vaccination for rabies and other infectious diseases of horses can be accessed here: https://aaep.org/guidelines/vaccination-guidelines

Moral of this story of this deadly disease that has so many faces?  Equine rabies is a real risk for all horses, and a public health concern as well.  So for rabies—don’t wait, vaccinate!  And just to be safe…if your horse starts acting odd, please don’t put your hands in its mouth! Strange behavior is always a valid reason to call your veterinarian.