The best chance to improve the survival rate of a newborn foal is adequate disease prevention and planning. Daily observation of the mare in the last trimester, vaccination, nutrition and blood screening should compose the basis of a comprehensive broodmare program.

The mare should be observed for changes in the mammary gland and vulva. Early udder development and dripping milk can imply a problem with the fetus or placenta. Any vulvar discharge is abnormal and may indicate placentitis (inflammation of the placenta). If either of these clinical signs are detected, the mare should be evaluated by your veterinarian.

All pregnant mares should receive equine herpes virus (EHV-1), also known as rhinopneumonitis, at the beginning of the fifth, seventh and ninth month of pregnancy to help prevent abortion.

Thirty days prior to foaling the mare should be vaccinated for the most important diseases such as West Nile virus, Eastern/Western equine encephalitis, influenza and tetanus. This time frame is critical to allow the mare to generate a strong immune response that can then be passed into the colostrum (the first milk). Foals are born completely naive to their environment and do not receive any immunity across the placenta. This means that all of the protective antibodies that the foal will possess are obtained from the colostrum. This protection will last until the foal is between four to six months of age when the immune system is fully functional and can respond to vaccinations. 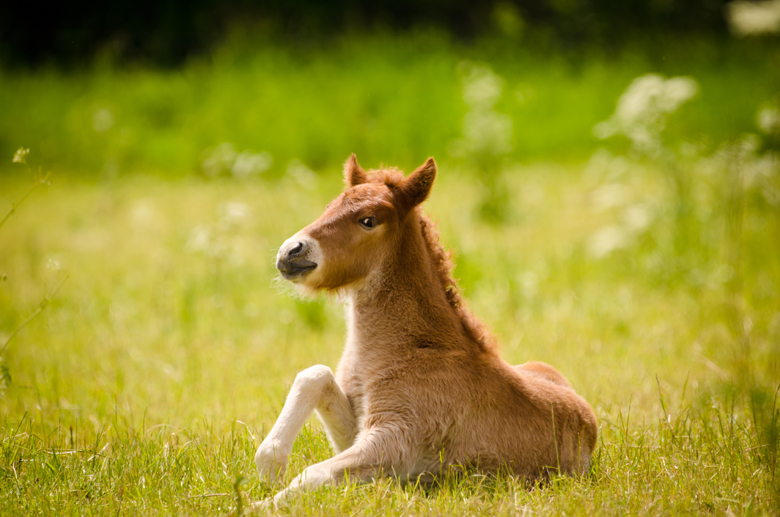 The need for additional vaccinations for botulism, Streptococcus equi (Strangles), rabies, Potomac horse fever and rotavirus should be discussed with the farm veterinarian. Type B botulism is endemic in some parts of the eastern United States (such as central Kentucky). If the mares will foal out in those areas they should be vaccinated in the eighth, ninth and tenth month of gestation with type B toxoid. After they receive the series, they will only need to be vaccinated in subsequent years 30 days prior to foaling.

Neonatal isoerythrolysis (NI) is a problem that occurs in one to two percent of the equine population. This disease is a result of the foal absorbing antibodies in the colostrum that attack its own red blood cell,s resulting in hemolytic anemia. The clinical symptoms include jaundice (yellow) mucous membranes, anemia, exercise intolerance and orange or red urine.  The disease can be fatal and is expensive to treat.

Mares can be screened for the presence of these antibodies two weeks prior to foaling. If the mare is tested too early it is possible to get a false negative result. If the mare does have these dangerous antibodies, the foal must not receive her colostrum. The foal will need a different source of colostrum that is negative for the antibodies. The foal should not be allowed to suckle from the mare for the first 24 hours of life. During this time the foal will need to be bottle fed milk replacer after it receives the donor colostrum.

Checklist For The Third Trimester 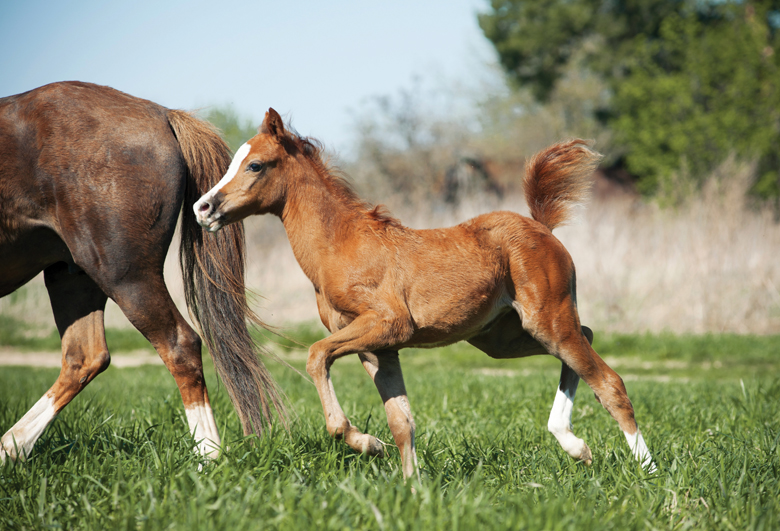 Many large farms have foaling attendants 24 hours a day. It is very important to be present when the mare foals because the window for survival for both the mare and the foal is narrow if a problem occurs. If you have only one or two mares there are foaling, monitoring devices that are quite good and can minimize sleep depravation for the owner. They send a signal to a pager when the mare is foaling.

Once the chorioallantois ruptures and the allantoic fluid escapes, the foal should be delivered in 20 to 30 minutes. If the foal has not been delivered, contact your veterinarian immediately. A normal foal should be able to sit on its sternum within two to three minutes after birth and stand within one hour of birth.

1 Hour: The foal should be standing

2 Hours: The foal should be nursing

3 Hours: The mare should have passed the placenta

If the foal does not follow this schedule, it is time to contact your veterinarian. Foals that don’t stand and nurse soon after birth will become hypoglycemic and loose the ability to stand. In addition, they are prone to become septic (bacteria in the blood stream) if they do not ingest colostrum as soon as possible after birth.

Under normal conditions the chorioallantois ruptures and a stream of fluid is released. Normal delivery should proceed with the protrusion of a white sac from the vulva (amnion).   If a red velvet structure is protruding from the vulva, immediately cut it with scissors and try to gently pull the foal. The red structure is the chorioallantois which did not rupture at the cervical star and the foal and whole placenta are being expelled at the same time. When the placenta detaches from the uterus in this manner, the foal is no longer receiving oxygen and can die quickly. 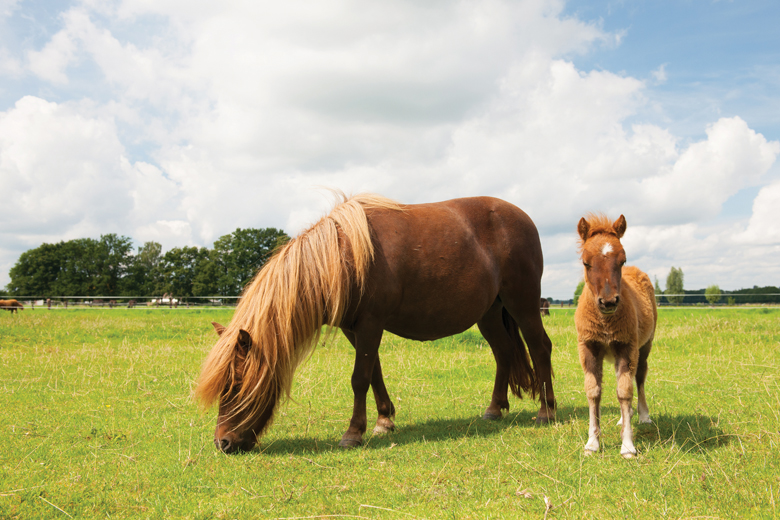 Dystocia is defined as abnormal labor. The foal is born with both front feet first with the soles of the feet pointing downward. The muzzle should come next. The level of the shoulders represents the greatest cross-sectional diameter. If the foal is in an abnormal position, contact your vet immediately. If the presentation is normal but the foal is stuck at the shoulders, pull gently on one foreleg slightly in front of the other limb to ensure that one shoulder precedes the other. Only apply traction when the mare pushes. There are several conditions that can cause dystocia (breech presentation, hip lock, contracted tendons). If the foal is in the wrong position the chances of survival are reduced and the welfare of the mare should override heroic efforts to save the foal. The uterus can be torn and result in the death of the mare with overzealous traction. If the foal can not be easily pulled, general anesthesia is necessary. If the foal cannot be pulled when the mare is anesthetized after 20 minutes, a C-section is the next step. Quick decision-making is paramount for success in these circumstances.

Regular breathing should start within three seconds from birth. The heart rate should be regular and around 70 beats/min. Common conditions that result in a cardiac arrest are premature placental separation (Red Bag delivery), excessive twisting of the umbilical cord, prolonged dystocia or suffocation by the fetal membranes. Implement resuscitation if the foal is not breathing, if the breathing is irregular or if the heart rate is less than 40 beats/min. To resuscitate a foal, chest compressions should be 80 to 120/min. This can easily exhaust one individual. Using a foal resuscitator, the foal should receive about 20 breaths/min. Ventilation and chest compression can occur at the same time. If using the foal resuscitator, make sure to occlude the esophagus with your finger to decrease air forced into the stomach. Rub the foal vigorously. Holding the foal upside down to let the fluid drain out of the nose should be avoided, as this makes it difficult for the foal to expand its lungs against the weight of the diaphragm and the intestines. Doxapram was historically the drug of choice to stimulate respiration. Recent studies have shown that this drug decreases blood flow to the brain and is no longer recommended. Epinephrine is the primary drug used for resuscitation.  The dose is 0.5 to 1.0 ml of the 1:1000 solution for a 100 pound foal every three minutes until spontaneous circulation occurs.

The umbilical cord should be left intact for as long as possible, allowing the mare to break the connection when she stands up. This allows maximal transfer of blood from the mare to the foal. If the cord must be broken, do not use scissors but pull the cord apart while holding close to the foal’s abdomen. The use of straight iodine on the umbilical stalk is contraindicated because it can cause severe scalding to the skin. Dilute iodine (ice-tea color) or a 1:4 solution of Chlorhexidine can be used. Fill a 6 or 12 cc syringe case with the solution and hold it over the umbilical stalk for 30 seconds. Dipping the umbilicus one to two times a day for the first two days is adequate. Inspection of the umbilicus for purulent debris, sudden enlargement, bleeding or urine should be part of the daily routine. 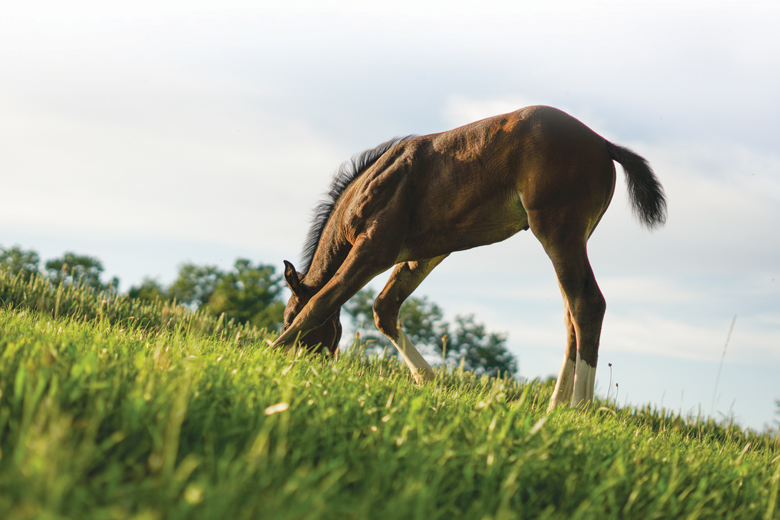 It is very common to administer an enema in the fist few hours of life to help the foal pass its meconium. Over the counter enemas are acceptable for this purpose. They are very simple to use and require proper restraint of the foal while inserting the soft applicator into the rectum. Never administer more than two enemas without contacting your veterinarian. Excessive use of enemas can result in severe electrolyte abnormalities and irritation of the rectum.

The most important blood test for the neonate is measurement of IgG between eight to 24 hours of age. This test reflects the level of antibody absorbed by the foal. The quality and quantity of colostrum directly influences the IgG level. The blood test is easy to perform. Failure of passive transfer of antibodies is diagnosed when the IgG level.

The best way to move a foal is to place one arm in front of the chest and one arm around the hindquarters to help push the foal forward. To collect blood in a vigorous foal, place them with the hindquarters in the corner of the stall. If the foal tries to collapse then loosen the restraint. If the foal is in lateral recumbency, place one hand on the head and neck and use the other hand to hold the down front limb crossed over the up limb. To pick up the foal, never lift it by the abdomen to avoid rupturing the bladder. If the foal needs assistance to stand, lift it by the sternum and tail.

When feeding a foal through a bottle, make sure that the nipple hole is not too big, allowing excessive amounts of milk into the foal’s mouth. A kid nipple will work well, or a few foals will suckle on a large baby nipple. Make sure not to hold the bottle too high, as the foal can easily aspirate milk. Do not force or squeeze milk into the foal’s mouth. The foal should have a very strong suckle reflex to attempt bottle feeding. Do not heat the milk in the microwave because it can become too hot and scald the lining of the stomach. Feeding a foal from a pan or bucket can be VERY challenging, but is the most practical solution if the mare does not have any milk. This takes diligence and patience. Make sure there is four to six inches of milk in the bowl to start. Initially the foal may waste a lot of milk. Feed the foal every two hours, offering the pan by gently placing it under the foal’s muzzle. Eventually the foal will learn to drink from a bucket.

How To Milk The Mare

The udder should be washed with warm water and lubricated with KY jelly. Someone should hold the mare at first for safety reasons. The teat is gently squeezed to express the milk. Do not aggressively strip the teat. A hot towel held over the mammary gland can help with milk letdown. Always strain the milk for debris (use a gauze pad) before storing the milk. A 60 cc syringe (with the tip cut off) and inverted (so the smooth side is against the skin) can be used to gently aspirate milk. Be careful not to apply too much suction as damage to the teat can occur. Human breast pumps have been used with some success but the strong suction may injure the mare’s mammary gland if it is not monitored closely.

All neonates should receive a physical examination within the first 12 to 24 hours of age by your veterinarian.