Oct. 31, 2020: Temecula, California:  Boyd Martin had only competed once at Galway Downs, many years ago and, by his own account, “I did terrible.” After clear show jumping rounds in the CCI4*-L today secured the win on Luke 140 and third on Long Island T, Martin has a far more favorable impression to replace that bad memory.

“I came out here thinking ‘Ludwig’ (Long Island T) might beat Luke this weekend. But it was Luke’s weekend and I’m really glad I brought him out here.” Martin said he’s been touting the horse’s international potential to his many-member owner syndicate for two years and “this weekend is the first real moment that proves it.” While Long Island T’s usual strong point, dressage, was off due to excess energy, Martin was thrilled with his cross-country and show jumping.

Martin said both horses’ experience set them up for 5* excursions and the overall experience will likely lead him back to Galway Downs from his East Coast base. “I’d like to come here every year. Especially for the young horses, it’s a great experience to fly out here. The cross-country course was very challenging and both horses learned a lot. I’d prefer a trip like this than going overseas. It’s cheaper and the standard of competition is just as high. Plus, it’s good to support our American events. Sometimes I think it’s a little easy to run off to Europe.”

Over the roll backs and fast-coming fences of designer Mark Donovan’s course, Martin incurred minor time faults with both horses to hold their first and third places after the first two phases. Luke 140 finished on a 31 and Long Island T on a 36.40.

Martin described California as like “being in another country because I don’t know anybody out here.” Californians knew him, though. Many described the chance to watch Boyd and fellow East Coast-based master Phillip Dutton as a riding lesson unto itself, even when they were just schooling in the warm-up. 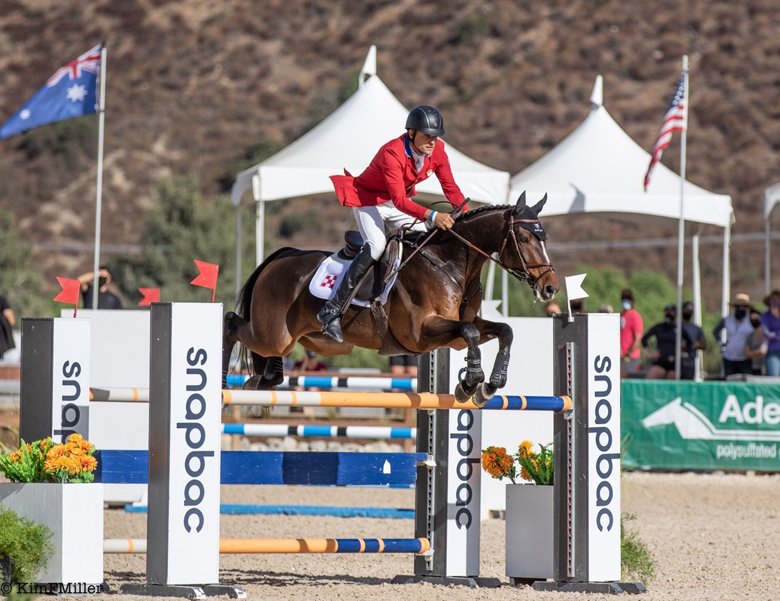 “You almost won your first 4*,” Tamie Smith leaned over to tell Passepartout after laying down a clean trip with .40 time faults. The horse’s next compliment came from USEF Eventing High Performance director Erik Duvander: “You know he is still just a baby, but he comes off like a professional.” Smith “absolutely” agreed with that assessment of her daughter Kaylawna Smith-Cook’s 11-year-old German Sporthorse. “That was the classiest round of all three phases. He did not put a footfall wrong.” They finished on a 32.40.

The California-based 2019 Pan Am Team gold medalist has strutted the West Coast’s special stuff for several years now. She shared some advice with Texas-based Rebecca Brown, who finished 4th in the 12-starter field on Dassett Choice. “You can be based anywhere, you just need the right team,” Smith said. “You need the trainers that can help you develop your system. Erik (Duvander) has helped me understand that.”

As appreciative as she is of Duvander, Smith was happy to “annihilate” his Adequan®

USEF Futures Team Challenge squad. Smith captained Team Leslie, with USEF Developing and Emerging Rider Coach Leslie Law, and including Rebecca Brown and young rider Charlotte Babbitt. The Futures program is designed to build the unique skills required of team riding and to foster connections, coaching and guidance for international hopefuls. There’s room for rivalry, too. Duvander’s crew had won the initial outings and with #1-ranked U.S. eventer Liz Halliday-Sharp, fellow 4* rider Emilee Libby and young rider Sophie Click, it could be described “as a little stacked,” Smith noted. “We had three really good performances and it was really fun to win!”

Earning applause equal to the winner’s, Erin Kellerhouse and Woodford Reserve completed their first CCI4*-L on a 41.10. The score included only small time penalties and earned a fifth place finish. Based at Galway Downs year-round, Kellerhouse has been patiently developing the Irish Sport Horse up the levels, earning the appreciation of those who’ve witnessed their progress.

In 2015, Smith hauled Mai Baum east, then onto the international radar by winning the CCI3*-L and USEF CCI3*-L National Championships at Fairhill. Mai Baum went on to be Smith’s 2019 Pan Am Games partner and has already earned his qualifying score for Tokyo Olympic consideration.

Does Elliot-V have the same potential? “Absolutely! 100% yes.”

The 11-year-old Dutch Warmblood’s off-to-college owner Louisa Southworth declared his Thursday dressage test “magnificent” after watching in on the livestream. She drove to Temecula Saturday in time to see Smith don the USET pinque coat and win it all on a 30.20 that reflected just .40 in jumping time penalties.

Time faults on cross-country widened what was a very narrow dressage gap between runner-up Asia Vedder and Isi and Smith and Elliot-V. That grew with one rail at the liverpool, but Vedder remained thrilled with the finish. Outside of a break for hip replacement surgery earlier this year, Vedder and Isi have been progressing steadily and gaining the notice of several sport leaders. “He’s hard not to like,” she said of the Holsteiner. She also raised eyebrows with a newer horse this weekend: Get Cheeky, with whom she scored a 16.40 in dressage and stands second in the Open Beginner Novice division that concludes Sunday. Get Cheeky was sourced by Elmar Lesche of Germany, Vedder noted, the same source as the third-place winner in the CCI2*-L, Helen Bouscaren’s Irish Pop.

Helen’s husband James Alliston celebrated his Halloween birthday today with a third place CCI3*-L finish on Paper Jam. The Hanoverian/Thoroughbred had been Bouscaren’s ride until just four shows ago when “she very kindly said I could ride him” to fill a gap in his string. “He has a lot of energy and is always on his toes, which I really like,” Alliston said. “That can be a bit of a challenge in dressage, so we are working on getting him relaxed for that.” Their 38.20 dressage score stood through all phases.

The National Young Riders Championship and its John H. Fritz Trophy. U.S. were at stake, too, for contenders aged 16-21. With eighth and ninth overall 3* finishes, Charlotte Babbitt and Sophie Click were champion and reserve.

Burnell, Bouscaren and Sanborn Take the 2*

With 3-year-old dinosaur paying little attention in their ringside family fan club, Lauren Burnell and Freedom Hill continued a flawless weekend to win on a 27.20. The dinosaur was her Halloween-costumed son, who had already offered his coaching before cross-country. “He told ‘Jack’ to go fast and Mommy to hold on,” and the pair ran with that plan. It helped, too, riding her second horse and fifth-placed finisher Counterpoint first in the 34-pair division. “I just went in and tried to replicate that. The amateur in me came out and I got a little frantic in the beginning, but then it was nice to focus on the plan that my coach Bec (Braitling) and I had come up with.” Burnell has competed at the 3* level prior to having a baby and felt this weekend bodes well for possibly moving back up to that level.

Helen Bouscaren and her new Hanoverian Irish Pop stayed on their 4th-ranked 30.50 dressage performance to rise to third, after cross-county, then second. Their jumping round rode like the breeze it appeared to be. “He is fast, sharp and fun. You can put him exactly where you want him,” she said.

Third place was earned by another of Bec Braitling’s riders, Audrey Sanborn and OBOS Quality Time. The Cal Poly San Luis Obispo communications student called it a high point of their finishes and a harbinger for moving up to 3* in the spring. She praised the flowing, curvy course as fun to ride and their double-clear kept them on a 31.30 dressage.

With the international competition wrapped up, Sunday is dedicated to show jumping finalés for the three new Challenge divisions at the Modified-Training; Training-Novice and Novice-Beginner Novice levels.

After dressage and cross-country tracks at maximum difficulty for each division, the show jumping phase is staged in the Grand Prix arena with pairs going in reverse order of their standings, just as the FEI divisions did today. Ninety-five pairs snapped up the chance to test themselves and their horses and enjoy the showcase usually reserved for the sport’s highest levels.

Sponsors and volunteers are crucial to producing top sport for all levels at Galway Downs.