Whether you blame it on climate change, increased deer numbers, movement of horses for sport and pleasure — or all the above — the fact remains that Lyme disease in horses is on the rise.

Named for the town in Connecticut where it was first diagnosed in the mid-1970s, Lyme disease is one of the three main tick-borne diseases that can infect horses. Equine piroplasmosis and Anaplasmosis are the other two. Humans, dogs and cats can also be affected by Lyme disease.

It’s worth noting that, although some people refer to it as “Lyme’s” disease, this is incorrect.

Lyme disease is transmitted by ticks carrying Borrelia burgdorferi, an infective organism known as a spirochete that is specifically found in the tick species Ixodes scapularis (black-legged tick) and Ixodes pacificus (western black-legged tick), both of which are commonly referred to as “deer ticks.”

“Where ticks are active year-round, then transmission can be year-round, but as tick ‘questing’ activity intensifies [in the spring], transmission is reported as increased,” notes Eric Lockwood Swinebroad, DVM, Dipl. ACVIM. A board-certified equine internist, Swinebroad was one of seven specialist co-authors of the American College of Veterinary Internal Medicine consensus statement “Borrelia burgdorferi Infection and Lyme Disease in North American Horses.”

“If it takes weeks for antibody levels to rise, and if the disease is in fact due to the host immune response to the spirochete, then it could take weeks for signs to be seen,” says Swinebroad, who operates Newmarket/Indialantic Equine, a sport horse practice specializing internal medicine and lameness based in New Hampshire and serving clients throughout New England, New Jersey, Pennsylvania, Texas and Florida.

“The Northeast, Upper Midwest and California-Pacific Northwest are considered endemic regions,” notes Swinebroad, adding that Florida is likely in that grouping as well as a “transient epicenter” due to all the horse show travel in and out of that state.

A big challenge for both horse owners and veterinarians is that tick-borne disease can present with nonspecific clinical signs, so veterinarians have to consider numerous possibilities before arriving at a specific diagnosis.

Lyme disease isn’t usually even suspected unless the horse lives in, or has traveled to, an area known to have ticks infected with B. burgdorferi and ticks have been found on the horse.

The veterinarian will look for clinical signs while at the same time rule out other causes of those clinical signs. If you think diagnosing Lyme disease sounds like a major investigative process, you’re right.

Adding to the difficulty of diagnosis is the fact that Lyme disease in horses has only three definitively proven clinical presentations:

Swinebroad notes that beyond these proven clinical signs of Lyme disease, other indications that have been reported in suspected cases include stiffness, shifting-leg lameness, shuffling gaits, muscle soreness, lethargy, behavioral changes and skin sensitivity that makes it irritable to the touch (hyperesthesia).

Part of the ongoing challenge with Lyme disease is that horses can be exposed to the bacteria, and even infected by it, but not actually show any of the clinical signs. And there is a definite difference between being exposed, infected and diseased. Look at it this way:

If someone who has an influenza virus sneezes on you, you’re exposed, but you’re only infected if you breathe in the virus particles. Even if you’re infected, you only become diseased if your body doesn’t mount an effective immune response to fight off the virus and you show clinical signs of influenza.

Swinebroad says that this is very similar to how it is with horses and Lyme disease. A horse could be exposed if a tick infected with B. burgdorferi attaches to him, but the horse is only infected if the bacteria gets into his system. Even then, the horse is only considered diseased if he develops clinical symptoms after being exposed and infected.

A veterinarian will draw blood and have it tested for B. burgdorferi serum antibodies. Yet even if testing shows positive levels of these antibodies, this doesn’t 100% mean the horse has Lyme disease. Positive serology simply indicates past or present infection (or in some cases, vaccination).

“There is no test for Lyme disease (just exposure and infection), nor does a positive result predict whether infection will cause clinical signs in the future,” says Swinebroad. “Once in the positive range, the patient with the higher antibody titer doesn’t mean the horse is sicker than one with a lower titer.” The ACVIM consensus paper clearly states: “There is no known correlation between magnitude of titer and likelihood of disease.”

Interestingly, the only definitive way to prove the presence of Lyme disease is upon necropsy.

Swinebroad explains that to make a Lyme diagnosis, the horse must have clinical signs associated with Lyme disease, which are supported by serological testing. As he says, “If you have a horse with clinical signs and a positive titer, and you’ve ruled everything else out, then you have an evidence-based rationale to treat the horse for Lyme.” 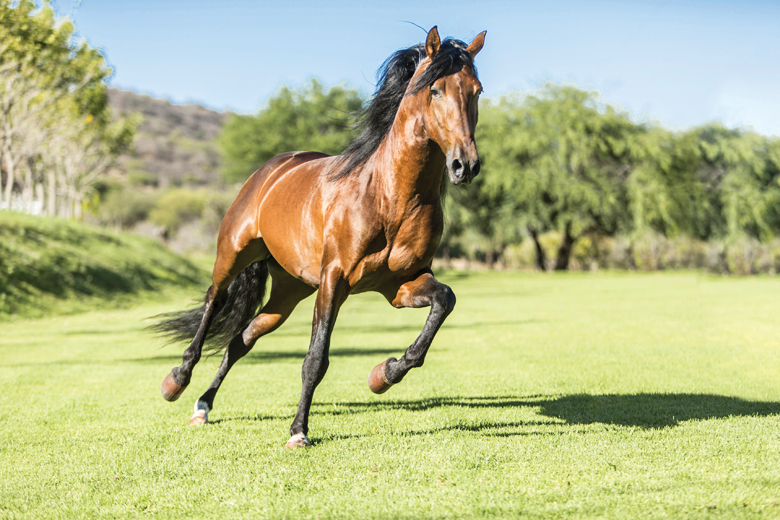 Antibiotic treatment is the typical approach if a horse has increased antibody levels and compatible clinical signs and if the veterinarian has ruled out other diseases. The tetracycline class of antibiotics is the most commonly used for treating Lyme, and treatment usually continues for at least four weeks.

Swinebroad adds that in some cases, horses being treated for Lyme disease may also need anti-rheumatoid arthritis/anti-inflammatory medications. Your veterinarian would determine the best course of treatment for your horse.

“Although antibiotics are generally effective at all stages of the disease, clinical signs may persist in some patients an extended period of time despite oral and intravenous antibiotic treatment,” notes Swinebroad.

Since ticks are to blame for transmitting the disease, guarding against them is the best preventive measure.

Woods, tall grass, shady areas and layers of vegetation are where ticks hang out when they aren’t attached to a host. With that in mind:

Make checking for ticks a regular part of your grooming routine — whether you ride or not. Ticks can attach anywhere but tend to prefer areas with thin skin, so pay close attention to your horse’s legs, neck, flank area, and all along the base of the mane, as well as the tail head.

It is generally accepted that an infected tick must be attached for a variable period of time to transmit the bacteria that causes Lyme disease, which is why daily checks are important.

Some research has shown that Lyme disease transmission is greatest when ticks are in the nymphal stage, typically around May and June. Unfortunately, nymphs are tiny — about the size of a pinhead or poppy seed — making them much harder to find on the horse’s body.

But don’t make the mistake of thinking ticks are active only during warm weather. Ticks are adaptive and some are active even during cold weather, so using protection on your horse and yourself, and doing tick checks should be a year-round habit.

At this time there are no vaccines labeled for horses with tick-borne diseases, although there is one for dogs.

“Guarding against ticks is best; there isn’t an effective prophylactic protection,” says Swinebroad. He points out that in endemic regions, some equine veterinarians are using canine Lyme vaccines on horses, injecting them multiple times a year.

If you live in an area where Lyme disease is an issue, it’s worth asking your veterinarian if the canine vaccine could be a reasonable  approach for your horse.

Should you find a tick on your horse (or yourself), remove it with a pair of fine-tipped tweezers or forceps, not your fingers. Holding the tweezers as close to the skin as possible, grasp the tick by its mouthparts. Pull back with steady, even pressure. Don’t twist or jerk, and don’t squeeze the tick’s body, as this can release infectious organisms. Once removed, drown the tick in a dish of soapy water or just flush it. Wash your hands well with soap and water.

Even if a tick doesn’t transmit a disease, it can still cause inflammation, swelling and itching. The small wound left after removing a tick can be contaminated by flies feeding on it, which can lead to secondary bacterial infection. Clean the area with alcohol or an antiseptic formulated for equine use and apply antibiotic ointment or wound care product to aid healing.