Lactation is a very important function in a mare. So important, in fact, those two lives depend on it. The horse owner should always remember that a mare would sacrifice her foal’s health to save her own life…both during gestation and also after foaling. In other words, mares must be fed adequately to maintain their own body condition and have a surplus caloric intake to feed the placenta during gestation and then (after foaling) to make milk to fill the udder. Many nutritionists believe that pregnant mares should be fed the same amount as non-pregnant mares until the last third of gestation, where the nutrient intake may increase to 1.3 times the level of the non-pregnant horse. During the heaviest periods of lactation, nutrient density may be required at 1.5 to 1.7 times the level of the non-pregnant horse. Water requirements may be 50 to 75 percent above the needs of the non-lactating horse. Mares that have had foals before may start producing milk in the last 30 days of gestation. Maiden mares may also secrete milk during the last 30 days of gestation, but many maiden mares will not be stimulated to produce milk until the hours preceding the birth of the foal. Both are considered normal.

Mastitis “inflammation of the mammary gland” is most often encountered when foals are weaned. It is important to keep a watchful eye on mares for one to two weeks after you wean a foal at four to six months of age. The alveolar cells of the udder will continue to secrete milk and the udder will become distended. As the udder becomes distended, a negative feedback loop will occur and milk production will decrease and udder distension will subside. If the well-meaning horse owner continues to manually express the udder, more milk will be secreted and the udder will NOT decrease in size. Removing the foal from view and contact will decrease milk production, as well as decreasing the mares feed intake back to levels equal to that of a non-lactating mare. Mastitis can easily be diagnosed by your equine veterinarian and may present with pain, fever, hind limb lameness and occasionally anorexia. After diagnosis and treatment, clinical signs rapidly return to normal, often under a week.

Lactation tetany (often called “eclampsia” in farm animals) rarely occurs in horses. It is caused by mares producing large amounts of milk and then exposed to work requiring muscle contraction since calcium stores are required for muscle activity. 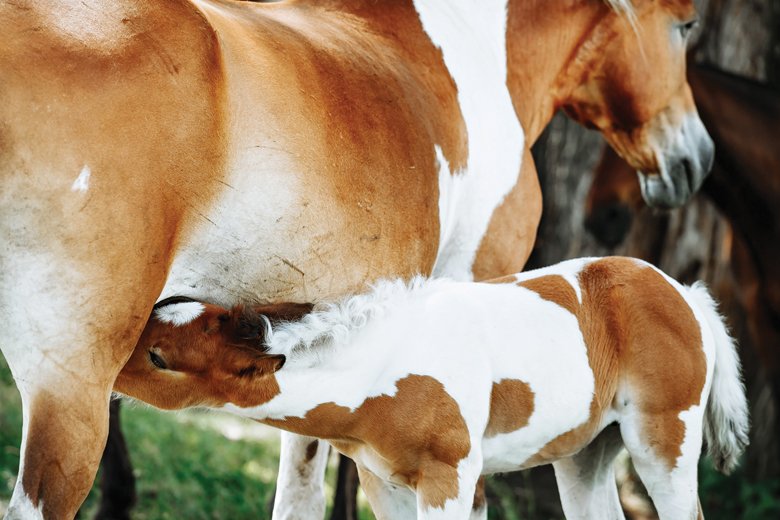 Agalactia is the absence of milk production during a time period when the mare should be producing milk. Almost all instances of agalactia in mares are a result of the ingestion of fescue-type grasses contaminated with the fungus Claviceps sp. This is an ergot alkaloid producing fungus and contaminates as many as 70 percent of the fescue grasses in the United States. In addition to agalactia, ergot alkaloids are responsible for thickened fetal membranes, prolonged gestation, abortion, and premature rupture of the chorioallantois (red-bag delivery). Ergot alkaloids reduce prolactin secretion since they are dopamineagonists. To treat agalactia caused by ergot alkaloids, you can use dopamine antagonists such as domperidone, reserpine, sulpiride and phenothiazine tranquilizers such as acepromazine. Mares can be grazed on fescue when they are pregnant but should be removed from fescue-contaminated pastures during the last 90 days of gestation and supplemented with alfalfa that has very high levels of calcium available to the horse.

Galactorrhea is the term for inappropriate lactation. Impending abortion may stimulate lactation or sometimes the premature foaling of a twin pregnancy. Premature lactation is a very common cause of the loss of colostrum and the subsequent failure of passive transfer in the newborn foal. Foals that are born to mares with dripping milk should be quickly evaluated as to their IGG transfer so supplemental colostrum or equine plasma can be administered. When the newborn foal is six to eight hours old, almost 85 percent of the passive transfer has been completed and so this is an ideal time to evaluate IGG transfer. If there has been a partial failure, colostrum still has time to be absorbed before having to resort to plasma administration. Many veterinarians and horse owners in the past have waited until 24 hours of age to check IGG status of the foal, but by this time, colostrum can no longer be absorbed in any appreciable amounts and plasma transfusion is the horse owner’s only, and costly, option. 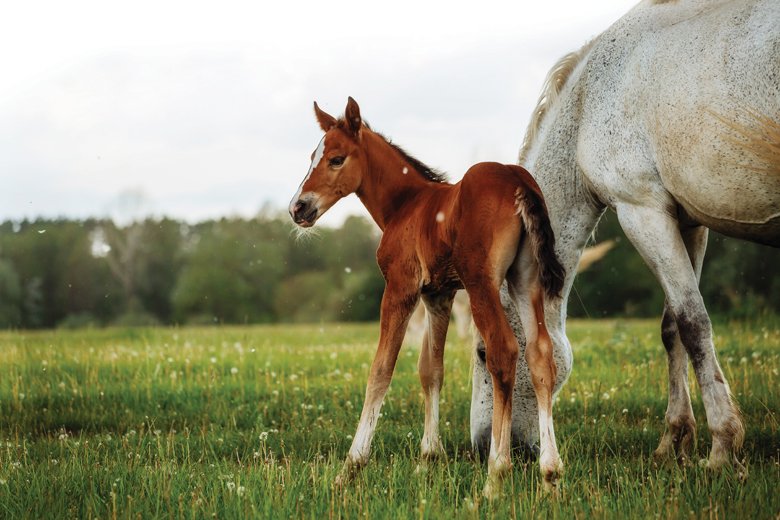 Inappropriate lactation is a subset of galactorrhea. In female neonates or in weanlings, the filling of the udder is called “witch’s milk”. This is attributed to lactogenic chemicals that are accessed through the mare’s udder or blood circulation and usually comes from the mare ingesting the estrogenic components of many spring grasses. Swelling of mammary tissue and milk secretion has even been reported in human infants. In humans, bromocriptine (a synthetic ergot alkaloid) is used to suppress inappropriate lactation, as it is a dopamineagonist.  Bromocriptine is not labeled for use in horses, dosages not well defined, and its use may be controversial. In fact, no treatment of any kind is recommended for the presence of “witch’s milk.”