Because horses are prey animals, when they are made to go in tight, narrow spaces – such as a trailer – it’s natural for them to feel trapped and claustrophobic. When a horse feels trapped and claustrophobic and his ability to run and move his feet is taken away from him, his only other option he feels he has is to fight – kick, bite, strike or do whatever he can to survive the situation. 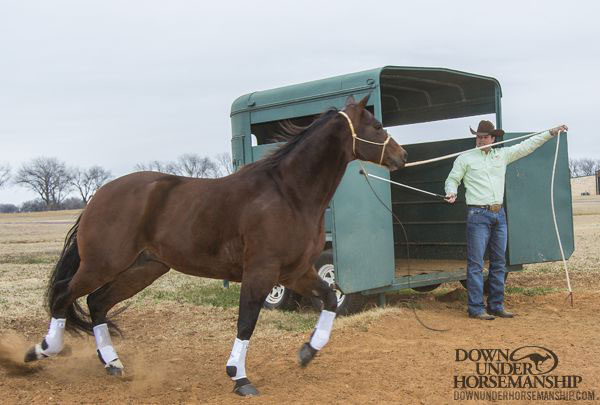 When horses go on the trailer relatively easily and then kick once in it, most owners of these horses think, “It can’t be a trailer-loading problem because he goes on willingly. It has to be a kicking issue.” That’s not true. Just because a horse goes on the trailer it doesn’t mean that he’s comfortable there.

You have to teach your horse to crave the trailer – thinking that it’s the best place in the world to be. In order to do that, work his feet outside of the trailer and let him rest inside the trailer.

If the horse only starts kicking when the trailer is moving, which isn’t uncommon, you’ll have to get a little creative. Load the horse in the trailer and drive around the property or a back road where you can pull off to the side of the road and there’s room to move the horse’s feet. As soon as he starts kicking, stop, unload him and make him hustle his feet. When he’s looking for a rest, load him in the trailer and let him relax and drive off again. Repeat that process until the horse realizes that kicking equals hard work and sweat. It’s much better to stand quietly in the trailer than be outside of it hustling his feet.

Remember, the horse is kicking because he really doesn’t want to be in the trailer. If you can get the horse to think that the trailer is the greatest place in the world to be, he will no longer want to cause any problems in the trailer.

Kicking in the Trailer