For the first – and probably only – time ever, the eight races, which each sported a purse of $10,000, for 2- and 3-year-olds of both gaits and sex divisions ended their seasons at “The Cradle of the Trotter.”

Normally, the county fair races kick off July 4th weekend in Goshen, but due to the coronavirus pandemic, the competitors had to labor into the September holiday.

To qualify for the finals, the competitors needed at least five starts from the 14 County Fair tracks. 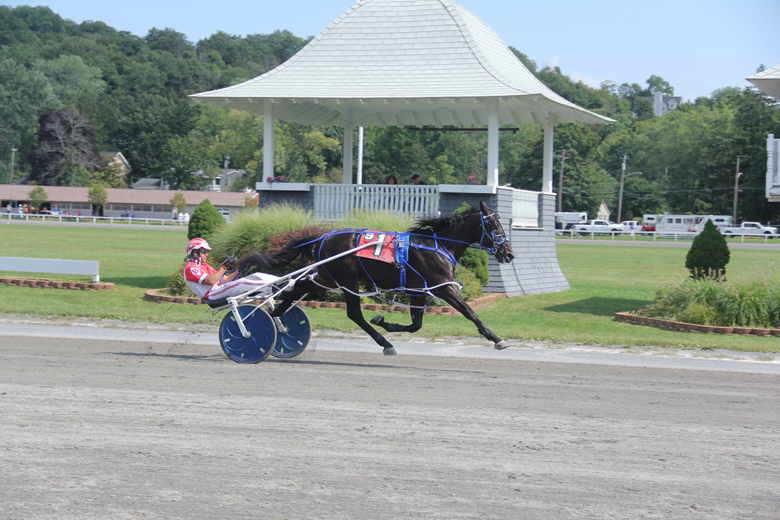 Due to state guidelines, the competitors didn’t have the fans to cheer them on, but that didn’t stop the races from being ultra competitive. In fact, it came down to the final race to determine the NY County Fair’s top driver.

Leon Bailey, 33, by virtue of his win in the NYCFF for 3-year-old colt & gelding pacers with Mr Dunnigans (American Ideal-Legacy), moved to the top of the driver standings over Claude Huckabone III.

There was some confusion when Mr Dunnigans crossed the wire, however, because the colors worn by the driver were not Bailey’s.

“What better way to pay tribute to him than to wear his colors?” said Bailey, who sported horseman Ed Dunnigan’s colors in the victory.

The horse is named after Dunnigan – a family friend of Bailey, trainer Jessica Okusko and the ownership team – who passed away in February of 2019.

Bailey also made a trip to the winner’s circle with his own trainee, Miley Rose (So Surreal-Bellas Bliss), in the 2-year-old NYCFF for filly pacers.

After a hard-fought stretch duel, Bailey and Miley Rose, who is owned by Donn L. Lewandrowski and Gail M. Farrell, scored by three-quarters-of-a-length over Jason Bartlett and Elegant Blue.

“Any time that I get to drive with the big guys like Jason Bartlett, I always look at it as a pretty good opportunity to test my skills,” Bailey said. “Anytime you can race the best and beat them, it’s something that I definitely enjoy doing.”

Bartlett ended up as the big winner of the day, taking five of the eight County Fair Finals.

Bartlett won the 2-year-old pace for colts and geldings with Brave Element (Bolt The Duer-Necessary Element) for trainer Claude Huckabone III and owner Go Where The Money Is Stable in a track record for juvenile pacing geldings of 1:57 3/5, breaking the mark set by Gallo Blue Chip in 1999. 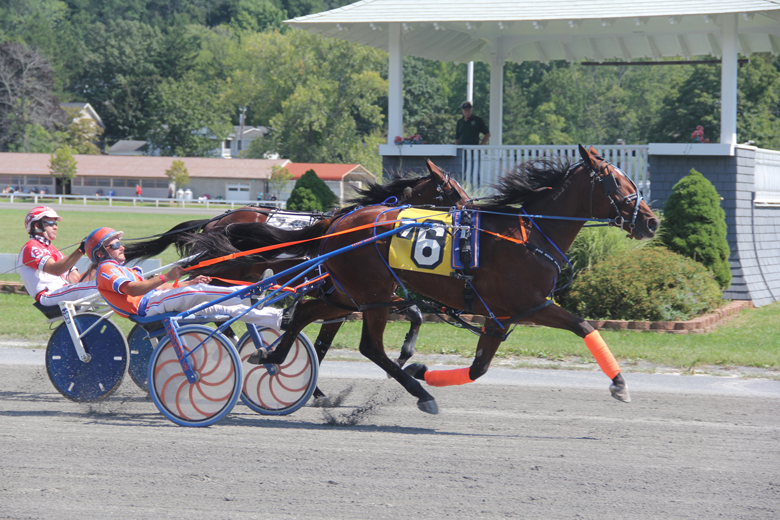 Bartlett also won on Sunday with:

·  Flexible Credit (Credit Winner-Back On Track) in the 2-year-old filly trot, who is trained by David Dewhurst and owned by Dewhurst and Philip K. Hale.

·  Ready For Workout (Whataworkout-Oven Ready) for owner/trainer Earl J. Sauve in the 2-year-old trot for colts and geldings.

·   Crazy For CJ (Crazed-Godiva Lindy) for trainer Huckabone III, who was the top trainer on the NY County Fair circuit for 2020, and owner Chasing Dreams Stable. The win in the 3-year-old trot for colts and geldings was the seventh straight for Crazy For CJ.

“To see [the connections of the county fair horses] after the races, they are so happy to win,” Bartlett said. “I’ve been in some big races with bigger purses, but I don’t know if you see the smiles and how authentically happy they are with these horses. They work hard all year and to have some success like they did today it’s good to see.” 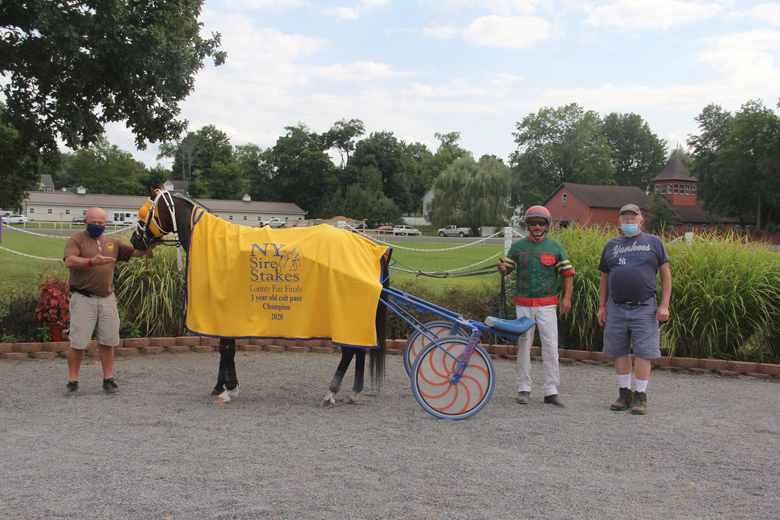 Driver Mark Whitcroft won the 3-year-old filly trot with Notoutofthewoods (Prayer I Am-Edge Of The Woods), who is owned and trained by his wife Cheryl Davis Whitcroft.

In compliance with state protocols, attendance was restricted to owners with advanced reservations who had to remain in designated areas.

Due to the generosity of the Agriculture & New York State Horse Breeding Development Fund, The Hambletonian Society, the Grand Circuit, OnGait.com, Big Dee’s Vet & Pet Supply and Purple Haze Standardbred Adoption Program, the races were livestreamed and can be viewed for a year at www.nysirestakes.com.