It happened in an instant. As she walked out to do the evening chores, Emma saw her old barrel horse, Rocket, put his foot through the fence as he bickered with the crabby broodmare in the next pen. Emma hollered to chase the mare away but before she could get to Rocket he pulled back, catching his foot on the wire and slicing the heel. As Emma cold hosed the leg to clean off the dirt she wondered if she should call the vet. It was only a small cut but it looked deep and Rocket seemed to be more sore than she expected…..

As horse owners, we can all relate to Emma’s story. Maybe it wasn’t the fence and most of the time we never see the wound happen but nearly all of us have experienced a horse with a laceration on its lower limb (distal limb in medical terms).

In Rocket’s case, the wound is a heel bulb laceration. Wounds in this location, no matter how small, have the potential to damage a vital structure, develop a severe infection, and have difficulty healing properly. Within the foot and pastern region there are more than 20 structures that are integral in the normal movement of the horse including joints, large blood vessels, nerves, and a plethora of tendons and ligament not to mention all the structures related to the hoof and its function. Damage to or infection of any combination of these structures could be career or even life threatening if not treated appropriately. 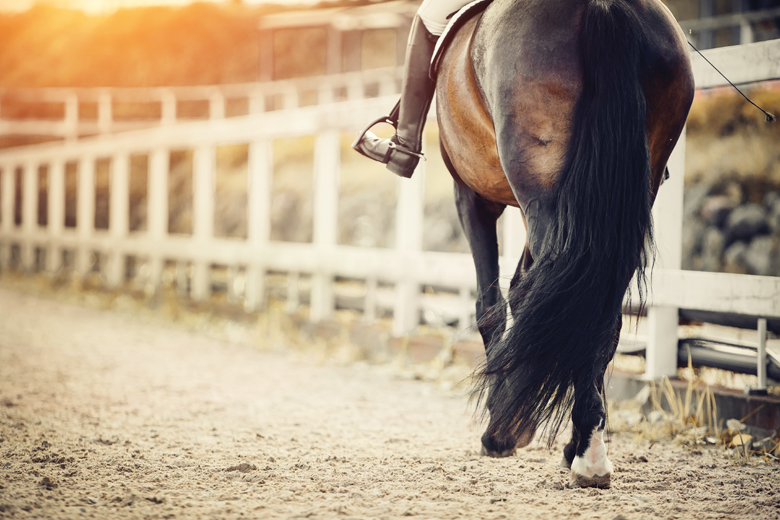 The treatment approach for heel bulb lacerations is similar to other wound but with a couple of important differences. One of these is the high concentration of joints, bursas, and tendon sheaths (aka synovial structures) in the area that could all be involved in the wound. The other is that the horse’s hoof is a dynamic structure which expands and contracts as the horse walks. This creates micro-motion within the wound that delays healing and increases scar tissue production.

Typically horses that present to the KSU Veterinary Health Center with heel bulb lacerations receive pain medication and sedation from the onset of treatment followed by a nerve block of the affected limb. Commonly, though not always, radiographs are recommended to rule out damage to bony structures or the presence of metallic foreign bodies such as wire.

The wound is then clipped of hair, cleaned of debris, and sterilely prepared for exploration. During wound exploration, the structural damage is assessed and a plan is made for determining the involvement of specific synovial structures which could number as high as 4: the coffin joint, the pastern joint, the digital flexor tendon sheath, and the navicular bursa.

All of the involved structures need to be lavaged in order to clear any contamination before infection sets in. This lavage can either be performed standing or under anesthesia and using either arthroscopy or multiple needles inserted into the joint, depending on the details of the situation.

Following lavage, antibiotics may be administered either directly into the joint or as an intravenous regional limb perfusion. Both of these techniques achieve extremely high concentrations of antibiotics in the area of the wound. Devitalized tissues are then removed from the wound. Ideally the wound is then sutured closed as with wounds in other locations. However, wound closure may be delayed in some wounds that are highly infected or contaminated. 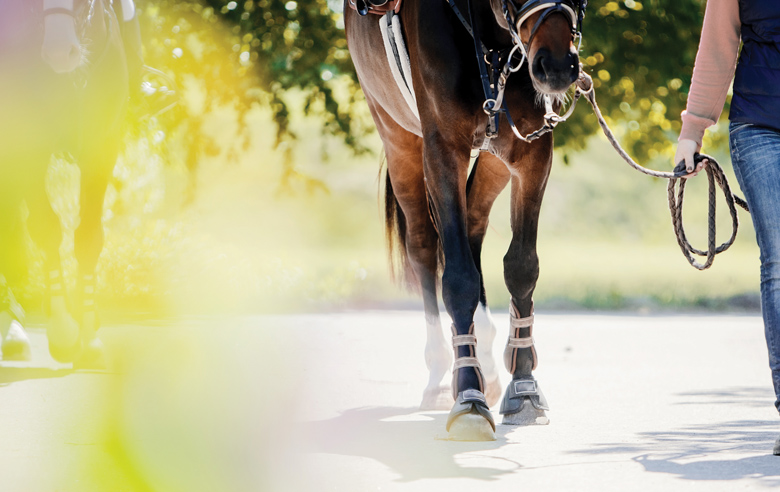 Finally, the issue of hoof movement needs to be addressed. This depends on the wound configuration. Some heel bulb lacerations can be treated successfully with simple bandaging and stall confinement. Most, however, require the use of a foot cast in order to adequately stabilize the wound. This can seem daunting to many owners but in reality, most wounds that require a cast heal faster, heal with a more cosmetic appearance, result in a reduced workload on the owner, and potentially have a lower final cost to the treatment when compared with bandaging or leaving the wound open. Many times, especially with a fresh clean wound, the cast can be applied immediately and the horse treated on an outpatient basis. Other times, casting may be delayed in heavily traumatized, contaminated, or infected wounds to allow further treatment of these complicated cases. After casting, horses will need stall confinement for 2-3 weeks before the cast is removed. Following cast removal additional bandaging or special shoeing may be needed to fully address the damage from the wound.

Fortunately, the prognosis for horses to return to their intended use following heel bulb lacerations is good. Roughly, 80-90% of horses can be expected to fully recover without complications and return to work provided that vital structures aren’t severely damaged or a severe joint infection doesn’t develop.

As for Rocket and Emma’s case, luckily no synovial structures were injured and the wound healed well without the need for a foot cast.