From time to time, your horse is going to spook at objects on the trail. Having a fail-safe approach to handling a spook and remaining in control of the situation will make the incident a minor inconvenience rather than a ride-ruiner and will provide an opportunity to train your horse and make him a better partner.

In the past, you may have dealt with a spook by stopping and facing the “scary object” while attempting to coax your horse up to it and convincing him it wouldn’t hurt him. This approach involves a lot of patting and rubbing and “There, there, Precious,” murmurings. Though this approach may eventually work, it takes a very long time and probably won’t keep your horse from spooking at the same object again, the next time he sees it.

Rather than stopping a horse and persuading him to approach a spooky object – a very predator-like move – put your horse’s feet to work around the object. It’s more effective and safer than letting your horse tense up and revert to the reactive side of his brain. Moving his feet around the object, constantly changing directions, will get him to use the thinking side of his brain and tune in to you. Horses can only think of one thing at a time – your horse is either focused on the spooky object or thinking about how you’re asking him to hustle his feet. 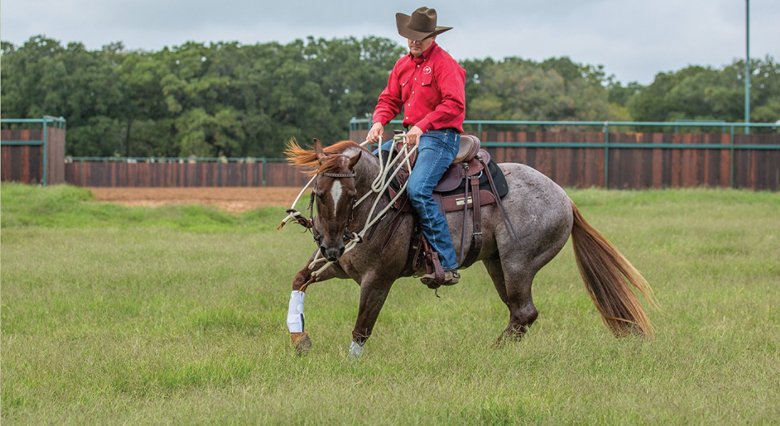 When your horse spooks at something, if it’s an object you can ride around, circle your horse as close as you can to it, and every one-and-a-half circles, turn him in toward the object and head off in the new direction. Horses can only think about one thing at a time. Your horse will either be focused on the scary object or on moving his feet and listening to you. Each time you stop the horse and turn in toward the object, he’ll get closer to it, until eventually, he’s so focused on you and moving his feet, he’s right next to the object. When you can feel that he’s got his attention on you and isn’t worried about the spooky object, then you can let him rest next to it on a loose rein. If he wants to investigate it (smell it, paw at it, etc.) let him.

If your horse spooks and you can’t tell exactly what it is he’s spooking at, put his feet to work. Using one rein, bend him in a series of serpentines. It’s impossible for a horse to use the reactive side of his brain when he’s constantly stopping and redirecting his feet. When he’s focused on you, put him on a loose rein and head back down the trail. Anytime he gets jumpy, put his feet to work. Soon he’ll be so focused on you that he won’t have time to find potential objects to spook at.