Using one rein at a time to direct him, you’ll hustle the horse’s feet and constantly make him change directions. The more you change directions, the more he’ll use the thinking side of his brain. Make him really hustle his feet and give him a reason to want to go in the arena and relax. 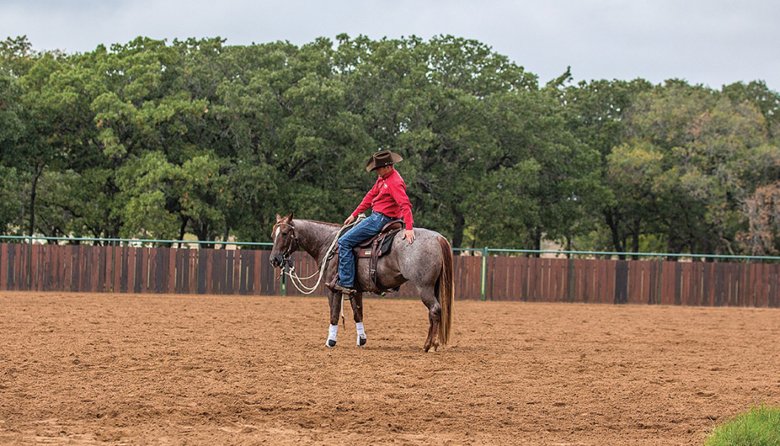 Work the horse for 5 to 10 minutes away from the arena and then take him into the arena and let him rest. In the beginning, you might only be able to bring the horse within 90 feet of the arena, which is normal. Your first goal is establishing a starting point, and then you can work on increasing your horse’s comfort being in the arena. While the horse is resting, rub him and give him a chance to catch his breath. After letting him rest for 5 minutes, go back to working him away from the arena again.

Each time you work the horse, you’ll take him back to your original starting point – the place he wants to be. And each time you let him rest, you’ll bring him closer to the arena.

When you let the horse rest, drape the reins down his neck and dare him to move. If he wants to move, let him. Take him back to where you were working him and hustle his feet again. Instead of sitting on the horse and saying, “Don’t go!” let him move, and then offer him the chance to stand still and relax. The key to this exercise is that you have to give the horse a reason to want to be in the arena and to relax.