An orphan foal still needs another mare or a person to provide milk and care, especially during the first vital days of life.

“The most immediate need for foals orphaned at birth is getting the animal colostrum within 24 hours after birth,” said Kris Hiney, Oklahoma State University Extension equine specialist. “Since antibody transfer normally occurs when a foal nurses on its dam’s colostrum, another source must be found.”

Foals should be administered about four pints of colostrum in one-pint increments within the first day, and antibody tests should be performed on the orphan foal within 18-24 hours after birth. If the antibody count is low, a plasma transfusion will be necessary.

Whether a foal is orphaned immediately or is orphaned before the age of weaning, the horse manager must get the foal on some type of milk diet as quickly as possible. Some producers have successfully used other mares as foster mothers. In those cases, the mare not only must accept the foal nursing on her but be synchronized in her lactation as well.

“Mares that have recently lost their own foal may be the most likely candidate,” Hiney said. “A small percentage of mares will allow other foals to nurse them. Mares can respond to unknown foals – and sometimes even their own – quite aggressively, so the horse manager usually will need to try different methods to get the mare to accept the foal.”

Some owners have rubbed the foal with the foster mare’s feces, milk or sweat to help the mare accept the foal as her own. Others have put some type of vapor rub ointment around the mare’s nose to interfere with the foal’s odor and, in essence, trick the mare. The same ointment may be placed on the foal. Sedation or hormones also may assist with the mare-foal bonding. The latter are referred to as exogenous hormones, as they come from medication instead of being produced inside the body. 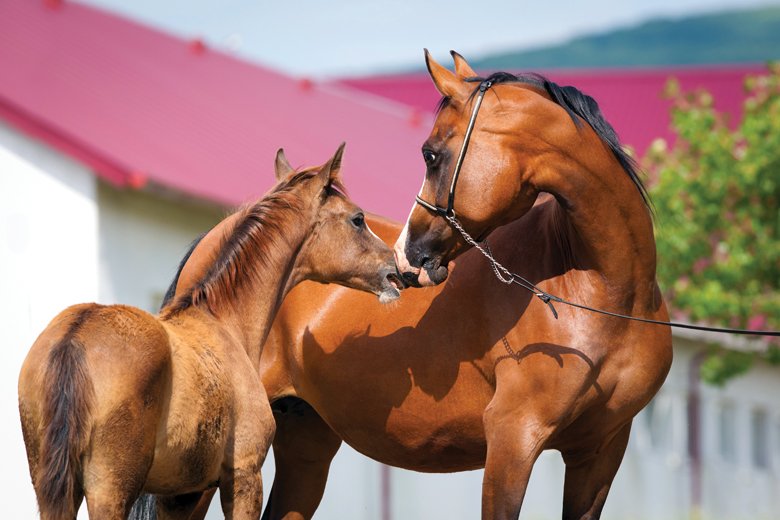 “Be aware the mare may need to be restrained the first few times the foal nurses,” Hiney said.

The horse manager must closely observe the foal and mare for the first few days. If the mare accepts or rejects the foal, it will typically be during this period. A foal that is rejected will have to be fed by bottle until it can be fed from a bucket or trough.

Even if the mare accepts the foal, the horse manager may still need to use a supplemental milk source. Consumption by foals will vary widely; it is not unusual for a 100-pound foal to consume 20 pints per day. Commercially available, protein-based milk replacers formulated for foals should be used, Hiney said. Do not use cow’s milk.

A common method of providing a supplemental milk source is with a bucket – with or without a nipple attachment, such as that used with lambs. The foal may have to be trained in using the nipple; however, once the foal is comfortable with the device, the animal will drink on its own. The foal should drink frequently throughout the day.

Once the foal is used to drinking, the horse manager can hang the bucket on the wall at the foal’s shoulder height and refill the bucket as needed. The bucket will likely need to be filled three or four times a day, although the exact number will vary according to the individual foal. At one or two months of age, the foal will need continual, free access to a milk source.

“The horse manager can get the foal on milk-replacer pellets as well,” Hiney said. “Start them eating feed relatively early. This will reduce the time spent providing them with liquid milk. Also, keep a close watch for signs of illness, digestive upset and continued growth.”