Cross-country shook up the standings in the Re/MAX  CCI4*-L with James Alliston and Paper Jam emerging atop the leaderboard. James continues a super year with only time faults on Clayton Fredericks’ demanding track.

“Paper Jam was very relaxed and rideable and he jumped really well,” James reports. T’was not always thus, especially on a course heavy on turns that haven’t been the 13-year-old Hanoverian’s strength. “The time was tight because you had to dial it down to make those turns, then you’d lose the gallop rhythm a bit.”

James is just back from representing the U.S. at the Military Boekelo-Enschede in October on another horse, Nemesis. He sees Paper Jam’s performance here as an indicator of his readiness for running Kentucky next year. Today’s effort bodes well for that possibility. As for show jumping tomorrow, James hopes the gelding’s tendency to get “buzzy” in Galway’s Grand Prix Arena won’t distract from their effort to add another international title to their long list of them.

James also has up-and-comers, Karma and Monkey, sitting second and third in the CCI3*-L..

Overnight leader Kaylawna Smith-Cook and Passepartout were sadly eliminated in their 4*-L debut with a fall at fence 25B in the 40-effort course. Horse and rider are fine, and the young professional has the consolation of sitting second with MB MaiBlume. They, too, had only time faults over the course. MARS Bromont Rising U-25 participant Sophie Click and Quidproquo are third going into designer Marc Donovan’s show jumping challenges Saturday.

In his third year of designing for Galway Downs, Clayton Fredericks was pleased with today’s outcome. The many clear jumping efforts in all international divisions might look a little misleading to those who didn’t see the action, he noted. “Those results probably don’t represent accurately how strong the courses were. It’s a reflection of good riding.”

This year’s course is part of Clayton and organizer Robert Kellerhouse’s long term strategy for bringing the venue up to the highest standard. “For my part with the cross-country, I’m very pleased with how it’s going. They did an amazing job with the ground and preparing the course in advance of the event. We are gradually building new fences and replacing old ones.”

One of those new fences was a new rails-ditch-skinny combination featured in all the international divisions. “I saw it as like a gymnastic,” Clayton explained earlier. Even though everyone was tackling it for the first time, it wound up causing few issues. Asia Vedder and Isi lost their CCI3*-L lead after triggering a frangible pin release at the combination and some of the passages had awkward moments. However, it provided one of many opportunities to ride what came up in the moment. It also typified Clayton’s desire, as an active international competitor himself, to “design jumps that I’d be happy to jump myself,” he noted. “My intent is to design courses that encourage good riding.”

Cheers to Moving Up in the CCI3*-L

Tamie Smith and Cheers cruised through the finish timers with no jumping or time penalties. It was a nice follow-up to their dressage test in which an off-course goof contributed to a 35.6 score that put them 7th. Tamie considers the 10-year-old Thoroughbred to be Badminton and Burghley material and was pleased with his work in the sandbox. “I feel like he’s kind of been knocking on the door,” Tamie says of the half-brother to Gin & Juice, an international star for Cheers’ owners Terry and Linda Paine.

Announcer Ed Holloway refers to Tamie and James as the “King and Queen of Galway” and the royal pair are indeed closely aligned in this 3* division. James is hot on Tamie’s heels with two youngsters, Karma and Monkey. Both sired by Escudo II, these very different looking and behaving horses are part of a growing string of solid mounts for James and Helen Alliston’s Northern California program.

“Karma is a really exciting horse,” said James of the 8-year-old Oldenburg who was the only other horse to make the 3* time. “She’s probably the fastest horse I’ve had and she’s a really good athlete, though dressage can be a bit tricky. Despite our score yesterday (a 37.2), I was very pleased with her because she was settled in her mind and walked well.”

James sits third with Monkey on a 40.7, including 5.2 time penalties. The handsome grey 7-year-old Oldenburg owned by Golly Martin has moved up the ranks with apparent ease under James’ hand. “He’s done a lot quickly.” 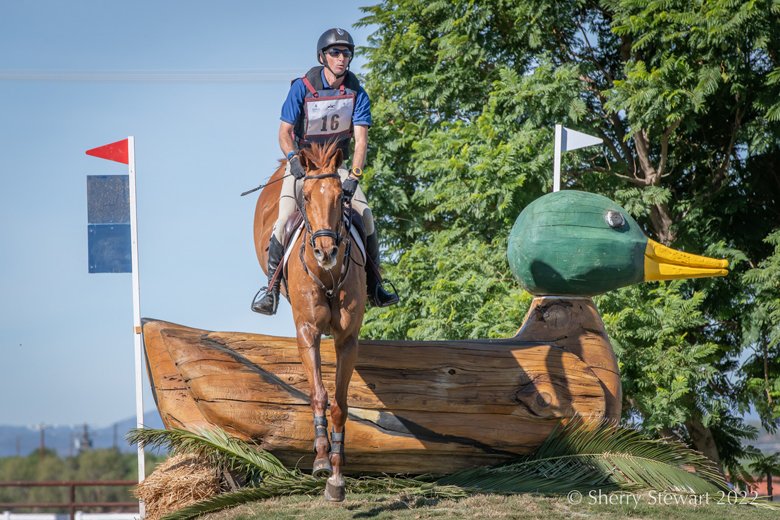 Tamie’s Tough to Beat In the CCI2*-L

On Thursday, Tamie acknowledged she was so new to Kynan, a 7-year-old Dutch Warmblood, she had no idea what to expect of him on cross-country today. Double clear is what he delivered on a track Tamie appreciated as a significant step up in size and technical questions from past years. Staying on their 27.1 dressage effort, Tamie retains her lead in this division and sits 3rd, 7th and 8th on three more hot prospects: Crafty Don, Mameluke and Fleeceworks Quinn.

“They were all double clear and fantastic,” she summarized. “They are all different types of horses, but I didn’t have one situation where I felt like one of the horses was green or that they didn’t understand what the questions were.”

Riding a horse that was bred for her by owner Liz Jenner of GWF, Erin Kellerhouse is in second on Bon Vivant GWF. She’s had the 7-year-old Oldenburg in her Galway Downs-based training program since he was 4. Every event and every year, he keeps “rising to the challenges,” she says. “He’s one of those solid citizens where everything seems easy for him.” At one point, he was so nonchalant about jumping, Erin questioned his scope. But as the jumps got higher, his athletic abilities became clear. “He needs a little atmosphere and difficulty to be impressed.”

Being based at Galway Downs was no advantage in facing cross-country’s new twists, turns and fences. “It’s weird to be here and not know where I’m going,” Erin said. She was uncharacteristically off her pace the first 5 minutes of the course while navigating those new challenges, but found plenty of galloping stretches to make it up to finish on a 28.9.

As the ring crew set jumps for Saturday’s show jumping finalé, the VIP Pavilion filled with exhibitors, fans and friends for a Silver Medal Celebration of Team USA making the World Championship podium for the first time in 20 years. Sponsored by Land Rover of Mission Viejo, the lively evening featured team member Tamie Smith and her medal, plus video messages from her teammates Boyd Martin, Lauren Nicholson, Will Coleman and Ariel Grald — all sending their best to Galway Downs and its supporters.

Organizer Robert Kellerhouse eschewed the spotlight, but Tamie called him out as “the guy who’s made West Coast eventing exist. And, if you could have seen Robert in Pratoni, I think you’d have to vote for him as our team mascot!” Tamie asked all to share her pride in being able to reach the sports’ international stage without giving up her home base here.

“It was 20 years ago that I watched our team get gold at Jerez,” said Robert. “A million gray hairs later, we got back to the podium. This World Championships team has unlocked all kinds of doors for everyone in our country. We don’t even know all the impacts yet.”

Marc Donovan’s show jumping courses in the Grand Prix Arena offer the final test to determine Galway Downs International’s champions on Saturday. The FEI jogs start at 8 a.m., then 2* at 9:30; 3* at 11; and 4* at noon, all going in reverse order of their standings.