Nov. 6, 2022: Temecula, California. The international divisions concluded yesterday but the exciting vibe lingered as up-and-coming horses and riders navigated Galway Downs’ unique Challenge Divisions. From the new Preliminary-Modified edition to the Beginner-Beginner Novice, each of the four segments supported gradual step-ups with cross-country efforts at the lower division’s specs and higher degrees of difficult in dressage and show jumping.

Professional Jennifer McFall and the 5-year-old High Five DF made easy work of every phase. The McFall family has been big fans of the Challenge format since its inception three years ago. “I love that they do this for the lower divisions,” Jennifer noted. “It’s great to expose our young horses to some atmosphere and having them have to come back and show jump on the last day after cross-country.”

High Five DF is a big boy. Jennifer hasn’t had the nerve to measure him and find out exactly how tall the Holsteiner is. “I don’t want to know! My husband (Earl) says he’s too big for me. I pretend he’s not big and, really, he’s a mama’s boy.”

Jennifer and High Five had a few time faults to spare to maintain their lead, and the pro’s priority was “taking my time so he could fit the strides in. He’s a big horse and some of the distances were tight.” In adding only .4 time penalties to their dressage score, they kept their lead to finish on a 26.9.

Tina Barclay and the 10-year-old Trakehner, Manning, adding only .4 time penalties to their dressage, finishing second on a 27.2. Erin Storey and the 7-year-old Thoroughbred WV American Pie added nothing to their 28.5 dressage to finish third.

It was the perfect format for amateur rider Katherine Van Alstyne, who travelled from Kalispell, Montana, to tackle the Novice-Training Challenge with Fun And Games. The 15-year-old Thoroughbred is a veteran in eventing, but Katherine is not. Having migrated from the show jumping world, Katherine prioritizes confidence-building opportunities, and the Challenge was exactly that. “I love the higher show jumps, but I don’t love the higher cross-country.”

Their 25 dressage score was the best yet for the one-year partnership. Adding double clear cross-country and show jumping iced the cake.

A close friend of Horse Trials and Challenge course designer Alessandra Allen-Shinn, Katherine appreciated the rider-friendly flow of Saturday’s track. “It looked twisty and turny when we walked it, but then it really flowed when we rode it. I really see Ali developing as a cross-country designer,” Katherine notes. Making the time was another high point. “We’ve struggled with that because I usually don’t like going fast.”

Katherine finished on her dressage score, as did the divisions 2nd and 3rd-placed finishers. Jennifer Achilles and Excel Star Lance were 2nd on a 27.6, and Teresa Harcourt and Csonger stayed on their 28.9 for third.

She heads back to Montana with the Jarba Farm team full of praise for Galway Downs. She’d only been to the venue three years ago, and not as a competitor. “Organizer Robert Kellerhouse and his team have done a great job here with so many positive changes.”

Winning this division, and on their 24.6 dressage score, were big bonuses for professional Mickayla Howard. She’s had a bumpy season with Ontario HH, a 10-year-old Irish Sporthorse and the victory marks a major move back on track. “We finally get to do our move up,” she says of this prep for Preliminary next year. “Ontario is stronger than ever and he was really with me through all the phases. That’s a great feeling.”

The Northern California professional came south with several students and enjoyed studying her own Galway courses and those of her students at various levels. “It was a course that really had a lot of positive things to teach the horses. There were tests of rideability and long gallop stretches. Great tests for all the important things: can your horse, go forward, come back, go right and left?”

Sarah Sullivan and La Copine added only a few cross-country time faults to finish second on a 25.6, and Kendra Mitchell and Calcourt Legend were third on a 30.7. 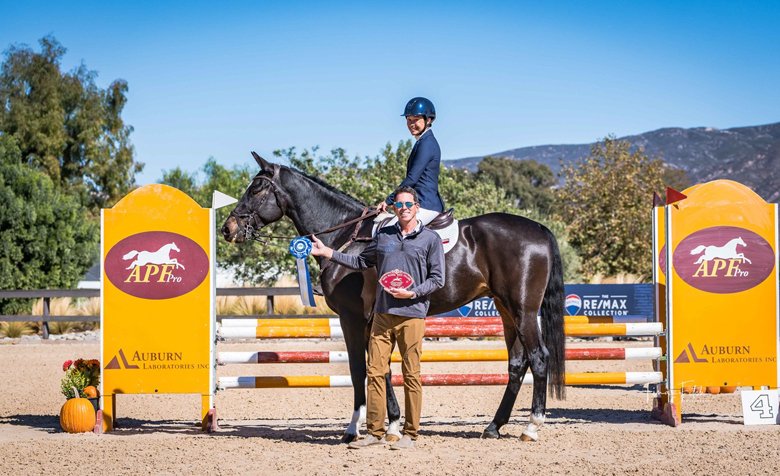 Professional Rebecca Braitling and Conlino PS overtook the lead to complete on their 25.8 dressage score. It was the first move up for the 6-year-old Oldenburg that she’s developed over the last two years for owner Jenny Ramirez.

“We’d been doing some 1.10-meter classes at jumper shows, and this division was perfect for his first time having to work at these speeds. I wasn’t sure what he had in him and this shows that he’s probably a top horse in the making.”

Bec and Conlino took the lead over from Jennifer McFall and Hallelujah DF, owners of the event’s lowest dressage score: an 18.9. Two surprising rails in a triple combination that troubled several contenders today and Saturday in the international divisions knocked them out of the lead. Yet Jennifer remained thrilled with the mare’s efforts.

The 7-year-old Holsteiner is the half-sister of High Five DF, both out of Columbia DF, the dam of several eventing stars. The rails were uncharacteristic for the beautiful gray, Jennifer reported. She credited tips from visiting German Olympian Bettina Hoy before the competition with producing their auspicious dressage effort on Friday. Bettina was on hand as a guest coach for the MARS Bromont Rising U-25program, in which the McFalls’ daughter Taylor, stood out by finishing 2nd in the CCI2*-L yesterday.

Junior rider Molly Duda and Generous DHI finished an impressive third on a 30.4.

This show is over for organizer Robert Kellerhouse and his growing team, but their quest to put West Coast eventing on true international par is just beginning.

After 25 years of staging competitions, Robert called this one the best ever. “It’s different because of the way our whole team is working on different aspects of the venue and the event.” Radical upgrades began a few years ago for two reasons. Property owner Ken Smith invested heavily in wide ranging improvements throughout the 242-acre property, now justifiably advertised as “a legend reborn.”

More recently, hunter/jumper organizer Ali and Francie Nilforushan dovetailed on those improvements to stage several weeks of competition. Robert’s team and the Nilforushans collaborated in several ways that impacted the showcase arenas, stabling, footing and overall exhibitor experience, including an immediately sold out VIP Pavilion experience.

“Our competition has been a beneficiary of that,” Robert explained. “Now we are mirroring those improvements on the lower part of the property, where the cross country is, bringing everything up to the same high standard.”

Teams tackling cross-county footing, course decoration and even beautifying the landscaping bordering the tracks are “mimicking the transformation that’s happened at the top of the property,” Robert said. Major and sustained commitments from sponsors including Land Rover of Mission Viejo, Re/MAX Collection, Devoucoux/CWD and Adequan have helped make the ongoing improvements a reality.

Most of all, Robert credits the Galway Downs team for making this year’s International a success.