Nov. 5, 2022: Temecula, California. The difficulty level and influence of cross-country suited James Alliston and his international horses perfectly this week. James rode Paper Jam to top the Re/MAX 4*-L and Karma to win the CCI3*-L, where he was also third with 6-year-old Monkey.

“Cross country was really challenging, particularly at the 3* and 4*. Not only did our horses jump all the jumps, they galloped really well, too. Which is an indication that they can go on and do bigger and better things. They all finished full of running.”

Even having the rail they had to spare in their lead, James was thrilled with the 13-year-old Hanoverian’s effort. The Grand Prix Arena is surrounded by a VIP Pavilion, a big spectator tent and grandstands, with international flags flapping on one end. “The course started with three fences going toward the end gate, which is where he usually gets a bit frantic,” James recounted. “But he was really good there and I sensed we were in for a good day.” So good, in fact, James added the Galway Downs Perpetual Trophy to his long list of Galway titles.

The 4* field had narrowed from four to two by the show jumping phase. The leader after dressage, Kaylawna Smith, had a fall from one of two entries on cross-country yesterday and Sophie Click opted out with Quidproquo after the final FEI inspection this morning. So, it was Kaylawna on MaiBlume to finish second. In their first 4* Long, the pair followed clear cross-country jumping with two rails in show jumping as a solid step toward what’s expected to become a 5* partnership.

More Alliston in the 3*

James warmed up for the Re/MAX 4* win by having a good morning in the 3*. The 8-year-old Oldenburg Karma put in a double clear well within the time. That gave them the victory when overnight leaders Tamie Smith and Cheers had rail in the triple combination midway through Marc Donovan’s stout course.

Karma is both fast and careful. “She’s that ideal blend of carefulness and courage,” James said. Monkey had only 1.2 time faults to hold his 3rd rank after cross-country.

The many-time Galway Downs champion was happy about more than his own results. “I thought this year was a really good competition and sport. On cross-country, the time was very influential. It was tight and I felt the winner could have come from anywhere. Cross-country weighted very heavily, and I think that’s how it should be.”

Tamie Smith described Cheers’ one rail as “unlucky” in an otherwise “unbelievable” round of jumping and she was thrilled with the 10-year-old Thoroughbred’s performance in all phases.

Several special awards were presented at the 3*’s end. Karma picked up the Yogi Cup, while Monkey earned the distinction of Best 7-Year-Old. Professional Sophie Click earned the Mia Erickson Memorial Trophy as the Best Young Rider, and her 3* horse, Tarantino 54, earned Best Cross-Country round, a new distinction made possible by Devoucoux. Sophie and Tarantino 54 finished 6th in the 3*.

Smith Gets A Crafty Win in the CCI2*-L

Tamie Smith’s next string of super stars strutted their stuff in this division. The 6-year-old Irish Sporthorse Crafty Don went double clear to win in a field with three stablemates in the running. Tamie’s overnight leader, Kynan, had a rail to finish 3rd and she was thrilled with all four.

“I think all four of them could have ended up on their dressage score. I think the show jumping was quite difficult today. The distances were tight and the triple was very influential. It’s a game of fractions. Sometimes the horses jump out of their skin and you still have an unlucky rail.”

She surmised that wavy lines on the poles in the triple may have complicated the questions for the youngsters, but was happy with their overall results. “Marc Donovan is an amazing course designer. I think the results are what you want. Enough clean rounds and enough trouble,” she observed.

Slipping into second between the World #7 ranked Tamie was 19-year-old Taylor McFall and Stoneman. In her third year of competing at the FEI levels, Taylor was happy to finish on their 31.1 dressage score, moving up from 6th after that phase.

One of five participants in the MARS Bromont Rising U-25 program, Taylor explained that her secret this weekend was taking each phase on its own. “This is a big effort and you have to focus on one thing at a time: today is dressage, today is cross-country, etc. So you don’t overwhelm yourself. It was all great, but the biggest part of the weekend for me is clear show jumping because that’s something we’ve struggled with for pretty much the whole season.”

Stoneman earned the Livingstone Award as the best Thoroughbred in the division, an award created by Canadian Olympian Hawley Bennett-Awad in honor of her own Livingstone. Taylor also added the Best Adult Amateur Award to her bounty and Molly Duda received the division’s Best Junior Award. 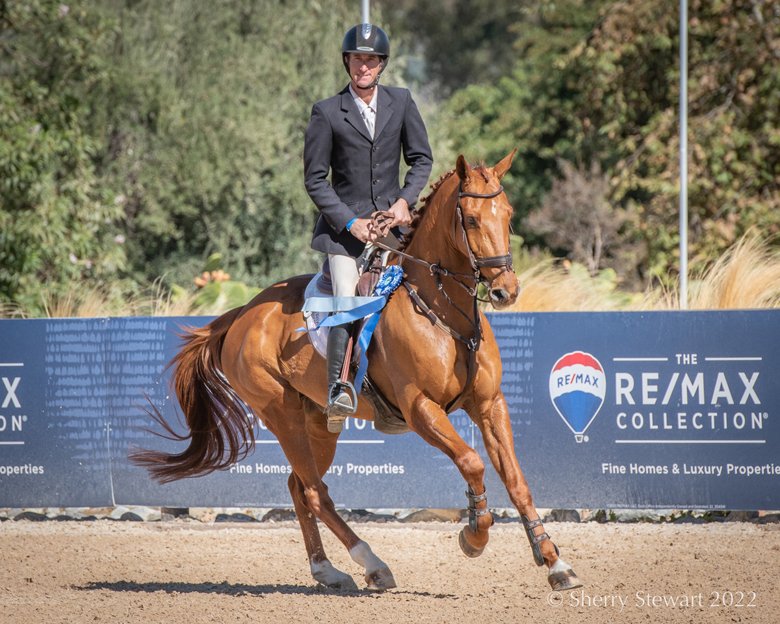 Peter Gray offered high praise for the level of riding and quality of horses he witnessed as President of the Re/MAX 4*-L Ground Jury and jury member for the 3* and 2*. The Olympic rider and coach noted that relatively small divisions in the West don’t correlate with quality in any way.

Watching cross-country from the announcer’s tower, Peter said the Ground Jury had a relatively easy time. “As officials, our most important role is on cross-country day because we have to sanction dangerous riding, stop riders on course if needed…save them from themselves. We don’t want to over-police the sport too heavily, but it is a high-risk sport.

“From my first year working out here (three years ago), we just don’t see that. We see riders going at the right speed, in the right rhythm. The overall standard of quality in all phases is high out here.

“What else is high is the quality of horses. Some are imported and I think the breeders out here are really getting a handle on what the sport requires.”

He praised Clayton Fredericks’ cross-country course for being one that educated horses and riders to help them move onto the next level. He credited the Galway organizers with doing the same by ensuring that cross-country and show jumping met the sport’s highest standards.

Peter also spearheaded the first staging of the MARS Bromont Rising U25 program to be held in the West. He was thrilled to have selected the Galway Downs International for the program’s West Coast debut and even more pleased with how well the five participating riders finished their outings with the help of guest coach and German Olympian Bettina Hoy.

With the international divisions concluded, the spotlight turns to the Horse Trials divisions and the four Challenge divisions. Starting at 9 am in the Grand Prix Arena Sunday, show jumping will determine the winners of the Preliminary-Modified, Modified-Training, Training-Novice and Novice-Beginner Novice Challenges.