If your mare has made it through 11 months of pregnancy, you’re almost home free. Labor and delivery, while momentous, are generally uncomplicated. Every effort should be made to be present during foaling. In most cases, you will simply need to be a quiet observer. Mares seem to prefer to foal at night in privacy, and apparently have some control over their delivery. Hiring a foaling attendant, installing a video monitor or using a birth alarm system can save the life of the foal if a problem should arise. It is advisable to have your veterinarian’s telephone number nearby in case of an emergency.

A Safe Place To Foal

What your mare will need, however, is a clean, safe, quiet place to foal. Horses have been giving birth on the open range for eons, and this is still an acceptable choice. Allowing the mare to foal in the pasture even has some advantages. An open grassy area is likely to be cleaner than a stall and provides a healthy environment with adequate room to foal. You won’t have to worry about the mare crowding into a corner or foaling too close to a wall. However, many owners prefer to confine the mare to observe her progress.

Should you choose to foal your mare in a stall, provide one that is a minimum of 14′ x 14′. If possible, the stall should have adequate bedding and a floor that can be readily cleaned and disinfected. Dirt or clay floors make sanitation more difficult. Straw (particularly wheat straw) is preferable to shavings, as it won’t cling to the wet newborn or mare the way small wood particles can. Remove manure and soiled bedding promptly and disinfect the stall between deliveries. 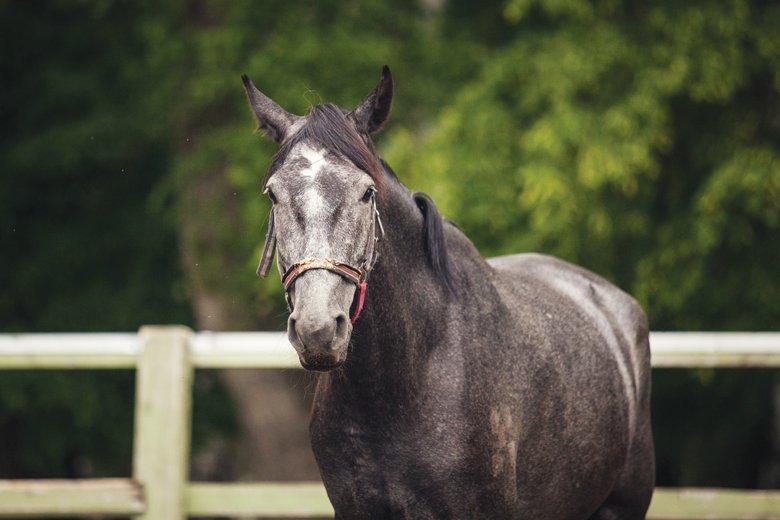 Mares provide clues that they will soon give birth. However, the timetable is far from absolute. Some mares may show all the signs like clockwork, others show practically none. The following is a general guideline, but be prepared for surprises:

Most mares foal without difficulty. It usually is best to allow the mare to foal undisturbed and unassisted. If a problem becomes apparent, contact your veterinarian immediately. What you can do: 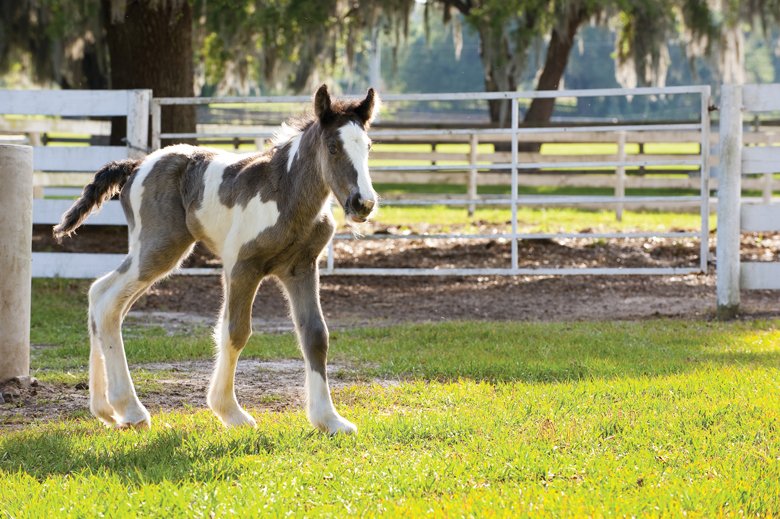 Labor is divided into three stages:

Stage one begins with the onset of contractions and generally lasts one to two hours. Even in a normal delivery, the mare may stand up, lie down and roll several times in an effort to properly position the foal for delivery.During this phase, contractions move the foal through the cervix and into position in the birth canal. The fetal membranes (allantois) may become visible at the mare’s vulva. When the sac breaks, signaled by a rush of fluid, stage one ends.The rupture of the allantoic membrane and rush of placental fluids may be confused with urination.

Stage two is the actual expulsion of the foal. This phase moves relatively quickly. If it takes more than 30 minutes for the mare to deliver, there is most likely a problem. If there is no significant progress within 10 to 15 minutes after the membranes rupture, call your veterinarian immediately. If labor seems to be progressing, wait and watch. Normal presentation of the foal resembles a diving position, with front feet first, one slightly ahead of the other, hooves down, followed closely by the nose, head, neck, shoulders and hindquarters. If you notice hoof soles up, the foal may be backwards or upside down, and you should call your veterinarian immediately. If you suspect any deviation from the normal delivery position, call your equine practitioner. The most deadly of foaling emergencies is a premature rupture of the chorioallantois, known as “Red Bag Delivery.”  If at any time during stage two you see red/maroon membranes covering the foal as it emerges from the vagina, the placenta must be rapidly torn open. The foal is detached from its blood and oxygen supply. Normal membranes that cover the foal are white or yellow and translucent.

Stage three labor begins after delivery and is the phase during which the afterbirth (placenta) is expelled. Most placentas are passed within 1-3 hours after the foal is delivered. If the placenta has not passed within 3 hours, call your veterinarian. A retained placenta can cause serious problems, including massive infection and laminitis.

Postpartum Care For Mare And Foal

In the excitement of birth, it is important to remember some tried and true guidelines:

Allow the foal time to break the fetal membranes (see “Red Bag Delivery” exception above). Once the foal breaks through, be sure it is breathing.

Observe the mare and foal closely for the next 24 hours.

Following birth of the foal, the mare and foal should be monitored for the following:

Mare is non-aggressive, curious and accepting of her newborn. Occasionally a mare will reject her foal. In such a case, the foal should be removed and reintroduced with the mare under restraint. Foal rejection is more common in maiden mares.

Foal should stand and nurse within two hours of birth. If the foal has not nursed within 3 hours, call your veterinarian. The foal may be weak and in need of assistance or medical attention. 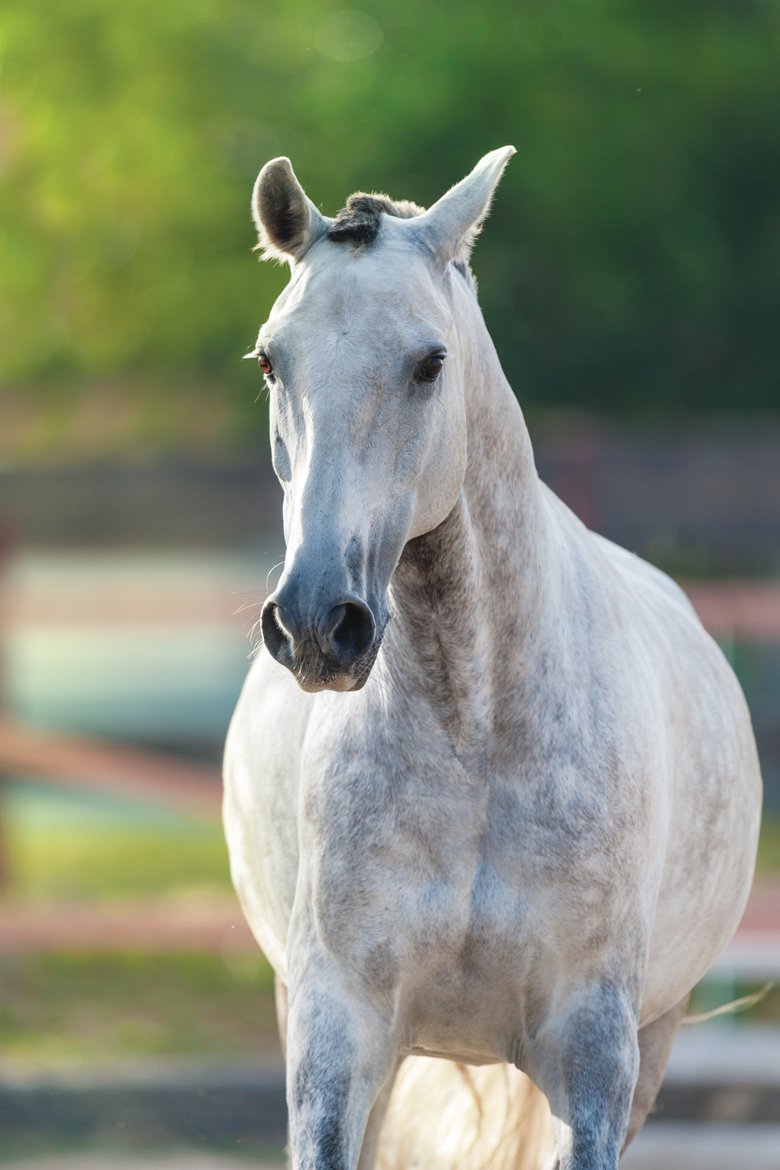 It is essential that the foal receive an adequate supply of colostrum. Colostrum, the mare’s first milk, is extremely rich in antibodies. It provides the foal with passive immunity to help prevent disease until its own immune system kicks in.

A foal must receive colostrum within the first eight to 12 hours of life in order to absorb the antibodies. If a foal is too weak to nurse, it may be necessary to milk the mare and give the colostrum to the foal via a stomach tube.

If a mare appears to be leaking an excessive amount of milk prior to birth, consult your veterinarian. This pre-foaling milk is not typically colostrum-rich. However, depending on your veterinarian’s recommendation, the mare may be milked and the colostrum frozen to give to the foal shortly after birth. For orphan foals, or mares without an adequate supply of colostrum, it is important to locate a back-up supply. Without it, the foal is at an increased risk of infections. Your veterinarian can test the colostrum to determine whether it is rich in antibodies. Also, the foal’s serum can be tested at 18 to 24 hours of age to evaluate IgG antibody levels. The majority of absorption (85 percent) takes place within the first six to eight hours. The foal can be tested when it is eight hours old and if IgG is deficient, it can be supplemented. If you wait until the foal is 24 hours old to evaluate IgG absorption and it proves to be inadequate, your only option will be a plasma transfusion. If IgG is inadequate, treatment for Failure of Passive Transfer (FPT) should be instituted by your veterinarian.

It is always a good idea to have your veterinarian do a post-partum examination of both the mare and foal, as well as the placenta.

Nature has provided an efficient system for the mare to deliver and care for her young. Be a prepared and informed owner so you can enjoy the miracle of birth, keep your anxiety in check and help the new mother and foal get off to a great start.