The 74th Annual Del Mar National Horse Show Hunter/Jumper week’s main event, the $100,000 Grand Prix of Del kept the nearly sold-out audience on the edge of their seats. From the very beginning in the Land Rover Ride & Drive to the final round in the jump-off, the crowd was entertained with heart stopping competition. 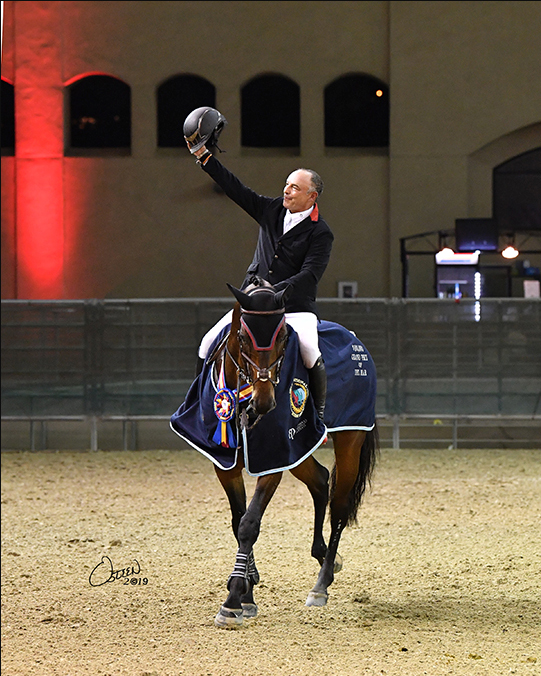 Before the main event got started the Ride and Drive kicked off the evening. Teams were comprised of a rider and horse who completed a short course of fences, and a rider who had to jump over their own mini fences and then they drove a Land Rover through a course of cones. The team that completed the course in the fastest time with the least amount of faults would win! In the end, Nicolas Hein Ruus and Evita earned bragging rights and first place ribbons for their performance. 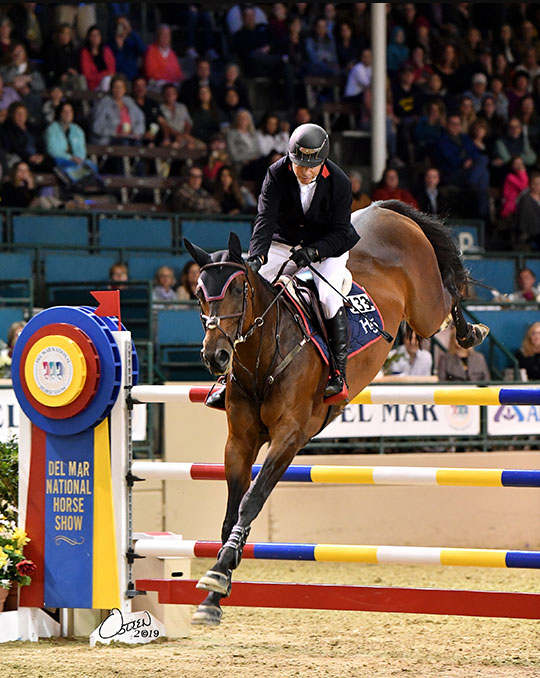 A total of 34 teams representing 12 countries took on the Grand Prix of Del Mar course, which was designed by Marina Azevedo of Brazil. The course was comprised of 13 obstacles with 16 total efforts with a time allowed of 82 seconds. It took the teams around a trying course, which included a triple combination, vertical-oxer-vertical, one stride to a two stride, across the short diagonal towards the in-gate to a triple bar on the rail that lead to a bending line. It started with  a seemingly uncomplicated vertical that ended up knocked down by the majority of the riders. Getting just slightly flat with their stride headed to fence one, they knocked down the top rail. Riders had to also tackle a single combination, oxer-vertical, one stride on the rail that took riders to a final bending line from fence 12 to 13 to finish off the course. Riders could add a seventh stride heading to the final fence, or set their horse up on a more direct path to get six, longer strides, over the lofty oxer with a liverpool.

In addition to a technical course, the time allowed was tight, creating another obstacle for the riders: the clock. Many riders came close, having only had a fraction of a second over the time allowed, incurring just one time fault.

“We had a great class tonight,” said Show Manager Dale Harvey. “The course was well designed and all the fans enjoyed the competition. It’s always such a fun night in the Del Mar Arena when it’s full and the crowd is really into the class.” 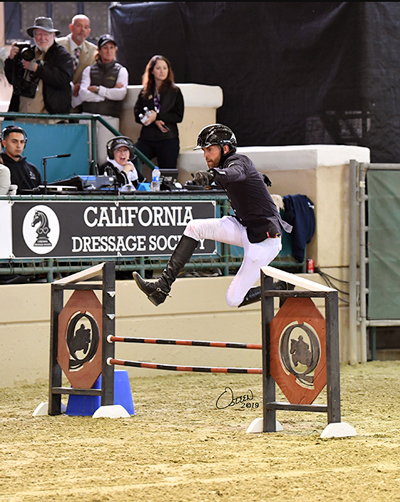 Angel Karolyi of Venezuela and the 11 year-old Holsteiner mare, April Moon, were first up in the class and set the bar high, with a fault free round within the time allowed. We wouldn’t see another clear round for 25 more rides. We had multiple come close, with just one time fault in the first round for veteran riders Rich Fellers and Guy Thomas and up and coming stars, Alessandra Volpi and Haley Schwab. Uma O’Neill, who represents New Zealand, and Caville, a 13 year-old mare entered into the arena as 26th in the order. They had a speedy round, leaving a stride out from fence 5 to 6 and crossing the finish timers with a clear round, challenging Karolyi to a jump-off.

Two rounds later, John Pearce, of Canada, and Firestone S, a 14 year-old gelding, made it three in the jump-off with just a rub on fence 8C and a pace that put them just under the 82 second time allowed. The crowd cheered as world-renowned rider Enrique Gonzalez, of Mexico, and Chacna, a 12 year-old Hannoverian mare, entered the ring. The pair has won at Del Mar before and wanted a shot at another jump-off. They made it around the course beautifully and quickly, with a finishing time of 78.03.

The jump-off was an annotated course from the first round, but allowed the riders and horses to gallop around the large indoor arena. It started with the triple bar on the rail, fence 4, to a long bending line over the large oxer, fence 6, roll back to the Lego jump, fence 7, bending line to the first part of the triple combination, 8a, another long gallop back to fence 10, then down the outside line to 11AB and finishing over the same large oxer, fence 13, as round one. 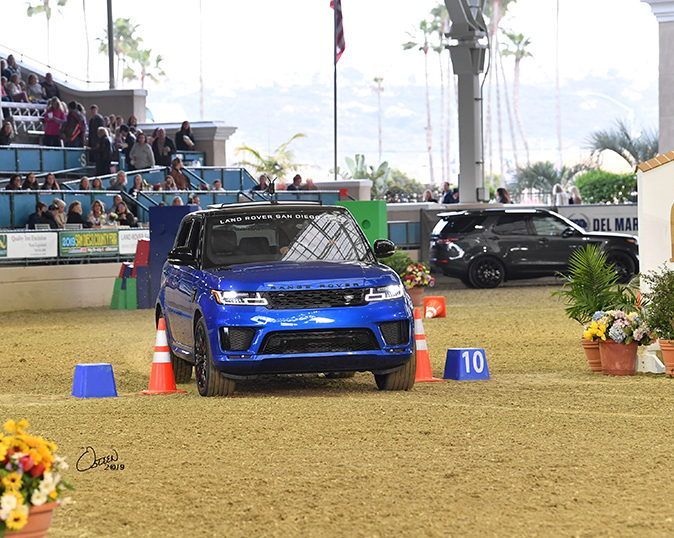 Karolyi got the jump-off started, with a beautiful, fast round, but unfortunately had the final fence down. Second in was O’Neill, and she had an eventful round. Leaving out a stride at the final fence, she was jumped out of her tack and fell off just past the timers, putting her in the ribbons! Pearce had a fast pace throughout the jump-off, but had down jump 6 to give him four faults. Final to go was Gonzalez. He and Chacna left it all in the arena, setting a steady, swift pace, they zipped around the Del Mar Arena without any jumping faults in a faster time than O’Neill to take the win!