Vinyl fencing for horses has many advantages. It is virtually maintenance free, needing no scraping and painting or periodic re-staining. It is beautiful, flexible, and stands up to the elements quite well. Its one drawback is that the rails can be popped out by horses leaning or scratching on them, and those lovely post caps are no match for a determined equine’s teeth. Rich Hackett of Elimra, Oregon discovered these problems after installing vinyl fencing on his ranch. His first instinct was to electrify the fence, but unlike wooden fencing, there was no way to simply nail the insulators to the vinyl posts. He considered drilling holes and attaching the insulators that way, but the thought of drilling into all those posts did not thrill him, and he was not sure if doing so would ruin the structural integrity of the vinyl. Instead, he set about solving the problem and in the process wound up starting a business: Easy Snap Fencing. 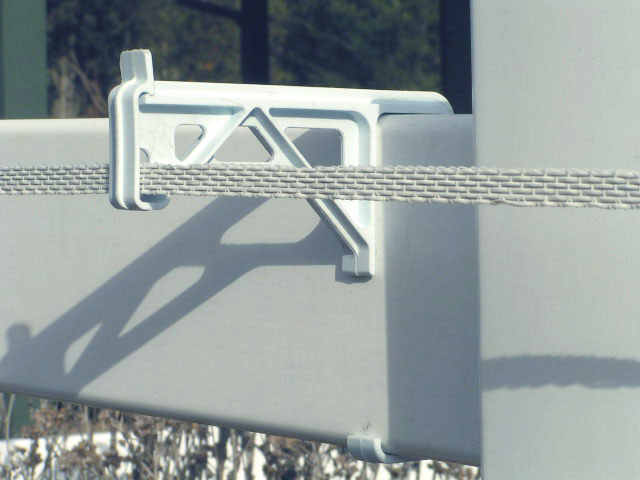 A builder by trade, Rich designed a wooden insulator that would fit the rails of his vinyl fencing as well as any standard 2” x 6” wood fence rail. He soon realized that the wooden insulator was not flexible enough to be easily attached to the rail. Undeterred, he approached his son Rich Jr., a graphic designer, to put his idea on paper. The pair then took the drawings to some engineering firms to get prototypes made from injection molded plastic. After a year of tweaking the product, they were finally able to go into production.

The result is an insulator that snaps easily on (and off) the fence rails. Easy Snap Fencing insulators go on so easily that it is possible to put insulators on 600 feet of fencing in five minutes time. Compare that to the time it would take to screw standard insulators onto the same fencing, or even nail them onto wooden posts. Once the insulators are up, stringing the electric tape or wire is a piece of cake! In addition, if the wire needs to be changed to a different height, the insulators are easily moved. 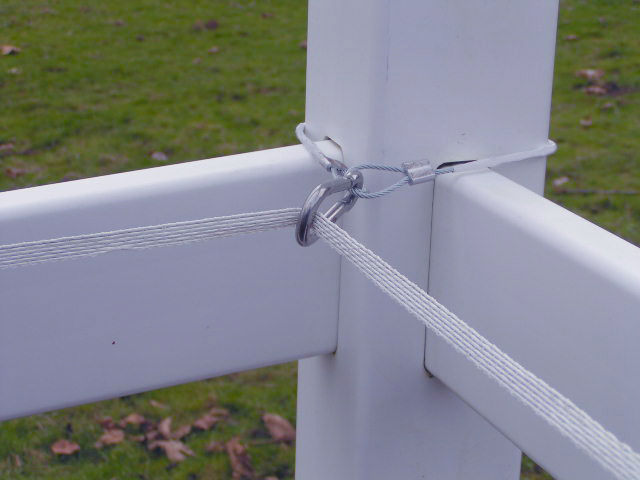 The Easy Snap Fencing insulator is reminiscent of window box brackets that fit over a deck railing. It is a modified L-shaped piece of plastic that snaps securely onto the fence rail and sticks out approximately 2.5 inches past the post. It can accommodate electric tape up to 1.5 inches wide, electric wiere, and electric rope up to 5/16 size. Simply open the portion of the insulator that holds the tape, put the tape in and snap it closed. Rich recommends installing the insulators every eight feet, next to the post, to keep the electric tape or rope from sagging. With electric wire, the insulators could be placed every 16 feet because wire is more rigid. He also suggests wiring both sides of fencing that separates two pastures to discourage horses from playing over the fence line.

The Easy Snap insulators are made in the U.S.A. They are designed to withstand the elements, having gone through freeze-thaw testing, and they have built-in UV protection. The insulators come in custom colors to match the fencing, including white, off-white, tan, black, brown and dark green. They have been experimenting with fashion colors, since one customer recently asked for hot pink! There’s even a special inside corner cable unit designed to tackle tricky corner issues. Easy Snap’s customers range as far south as Bermuda and as far north as Maine, and many are placing second orders.

For more information check out the website at www.esfencing.com or call 541/935-1423