If you’ve been around horses any length of time, chances are you’ve heard about “desensitizing.” While the concept may sound positive — getting your horse to be calm around things that previously upset him — some methods can actually backfire and cause more difficulties down the road. 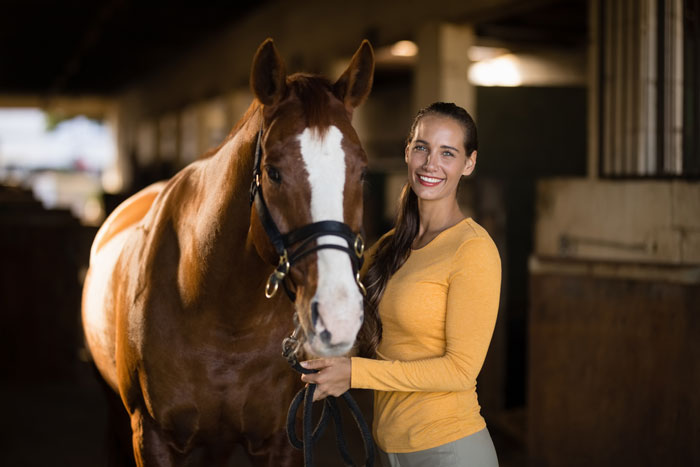 When you overload a horse with too much sensory information at once, he typically responds in one of two ways: he’ll either explode (“I’m outta here!”) or he’ll simply shut down and zone out (“I’m going to my happy place and it’s not here!”). Neither reaction is what you want.

While you might think the horse who “zones out” is in a better place mentally than the horse that explodes, that’s not the case. He might be standing quietly for the moment, but if you look closely, his eyes and expression tell the truth. In many cases, the horse with dull eyes and an “I’m not here” expression has mentally and emotionally gone inward to escape what’s happening. This horse still has the potential to explode or react negatively and even dangerously.

That’s why it’s so important to take the time to teach acceptance and encourage confidence, rather than bombard a horse with an overload of stimuli in the name of desensitization.

Acceptance and acclimation are probably better words to use than desensitization. What we want to do is get our horses acclimated to and accepting of things that are outside their natural world,” notes Richard Winters a longtime clinician.

“When a horse sees something outside his paradigm, his instincts kick in and he thinks, ‘I won’t stick around for this!’ He reacts rather than responds,” Winter explains.  “What we want to do is ‘reprogram’ or ‘recondition’ our horses so they respond rather than react.  They have a program built in by God when they’re born, but they’re so adaptable and they can be reconditioned.”

Two common “scary” things a domestic horse encounters are clippers and spray bottles.  Winters points out that there are right and wrong ways to get your horse accepting of anything.  Set the stage for success before you get started:

“Any time you’re trying to get a horse used to something, you can eliminate a lot of volatile reactions if you don’t tie him up,” cautions Winters.  “Be organized with your lead rope so it doesn’t get tangled or wrapped around you, and so that you can move with your horse if he moves.” 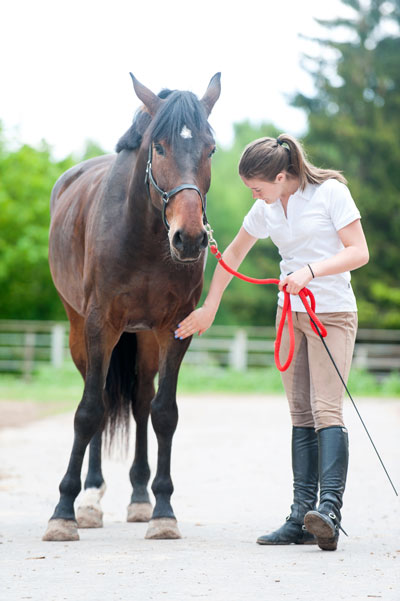 “I’m a big fan of cordless clippers because you aren’t fighting the cord and have all the room you need,” says Winters.  “Just make sure the batteries have a full charge, because otherwise the blades may tug at the hair.  Sharp blades are important because dull blades will also pull the hair.  You also need to keep the blades well lubricated with clipper spray.”

“You have a big responsibility to the horse NOT to hurt him with the clippers so he doesn’t have a bad experience,” he adds.  “Blades are sharp, so you really need to be aware of how you use the clippers and that you don’t jab the horse.  If you want to know how it feels, just run the blades over your own hand and take off the peach fuzz.”

Consider your approach.  If you “come at” your horse’s head with the clippers, he’s naturally going to resist.

“It’s a matter of degree.  Many horses are touchy about their ears and the hairs under the jaw, so start somewhere on the horse’s body where he can handle the clippers, such as his shoulder,” advises Winters.  “At first, just hold the vibrating clippers in your hand and rub the horse in that area with the back of your hand.  Don’t actually touch him with the clippers yet.  Let him hear the noise and feel the vibration through your hand.  Don’t be jerky and quick.  Your hand needs to have smooth, fluid motions.”

Ideally, you want to turn the horse’s apprehension into curiosity and that curiosity into confidence.  To do this, you can’t have a timetable and you must be patient.  Let the horse sniff the clippers if he wants.  Don’t be in a hurry!

After the horse is quiet and accepting of your hand holding the clippers and moving in different areas of his body (this might take more than one session), you can actually use the clippers on him.

Again, don’t tie him up. Stand to the side, not directly in front of him. Horses aren’t fighters by nature, but a startled horse may strike out, so you want to be safe.

Use common safety sense when you start clipping. When you’re working on the head, place your hand — the one that isn’t holding the clippers — on the bridge of the horse’s nose. This will help steady him so he doesn’t move quickly and hit you with his head.

Clipping legs can put you in a very dangerous position, so the best policy is to have someone else hold the horse. You and the handler should always be on the same side of the horse. This way if the horse jumps or moves around, the handler won’t unintentionally swing the horse into you.

Winters has found that some horses are more sensitive to having their legs clipped than their heads, so use caution. With some horses, it’s helpful to pick up the leg and hold it while you’re clipping.

You may think a spray bottle is nothing to be frightened of, but it’s not a natural thing to the horse. While it can’t cause pain like clippers can, the sensation of something spraying on the horse can bother him.

For starters, fill a spray bottle with plain water so you don’t waste whatever product — fly repellent, coat conditioner, etc. — you want to use.

Hold the lead rope, but don’t tie the horse. Standing at his side, lightly spray near his body in the area where he is least reactive. Just spray the air near him — not the horse himself — until he begins to accept the sound and motion of the spray bottle.

“Use gradual, rhythmic sweeping motions with your arm,” says Winters. “Don’t spray him directly, but just spray a mist of water up so it drifts down on him. Then gradually get closer to him as you spray the air beside him. Using the sweeping motions, go back and forth, in closer to the horse and then away.”

As you begin to spray the horse, do so in the areas where he is least sensitive, such as his barrel, shoulder or back, rather than his legs, head, neck or belly.

“Don’t continually spray the horse in the same area,” says Winters. “Just keep rhythmically moving your arm and he won’t have as much time to react to where he’s being sprayed.”

It may take several sessions with the water bottle for your horse to accept that being sprayed isn’t a torture session. Never spray product on your horse’s face, even when he seems accepting, because you might get some of the spray in his eyes or nose. Instead, apply the product using a cloth, or use a roll-on applicator, if available.

Just remember: Lessons with the clippers and spray bottle are really about trust and confidence. Always end on a positive note. Take your time and be sure to reward your horse with rubs and praise in a soothing voice when he responds positively.