Foals will normally stand within 30 minutes, typically after several failed attempts. As soon as it is steady on its feet, often within an hour of birth, the foal will attempt to nurse. Teat-seeking behavior is persistent, even somewhat random, because the foal does not know exactly where the teat is located. However, with the gentle assistance of the mare, the foal will find the teat, quickly understand its purpose, and know how to suckle, a behavior that is instinctive in horses.

Foals nurse frequently during the first few weeks of birth. Estimates range from one to two times per hour, with each session lasting about three minutes. As foals age, the frequency and duration of suckling decreases and they begin to eat other feedstuffs. Foals will remain close to their dams the first few weeks of life but will gradually explore their environment. By the end of the third month, foals will spend 60 percent of their time with other foals. When the foal is 5 to 7 months of age, 70 percent of their nutrients will come from non milk sources. This is one reason it is recommended to wean foals at about 5 to 7 months of age. 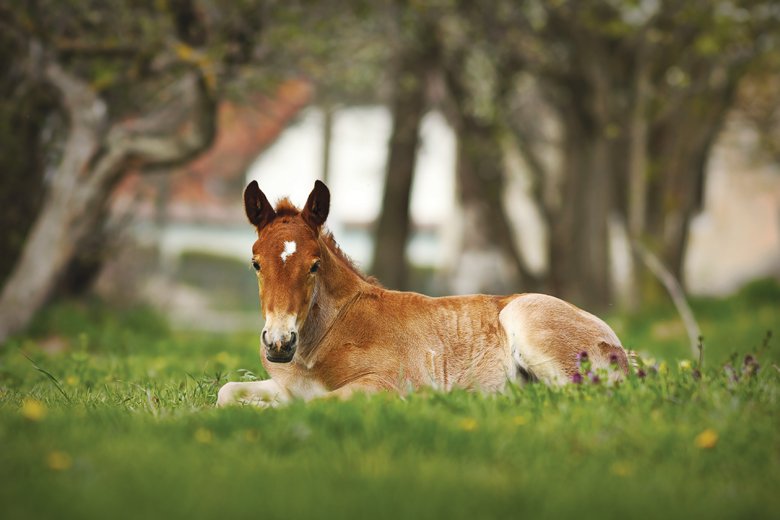 Care of the Newborn Foal

If you are present during the birth of the foal, your first step after the delivery is to make sure the foal is breathing. Quietly approach the foaling area and remove the birth sack (amnion) from the foal’s head. If the foal is breathing, your job is complete and you should leave the foaling area and observe the mare and foal from a distance. This allows the mare and foal time alone to recover from the delivery and bond to each other socially. If the foal does not begin breathing on its own, tickle its nostril with a piece of grass or straw or blow into the foal’s mouth to stimulate the respiratory reflex. If the foal still does not breathe, try rubbing the foal vigorously, squeezing its ribs or lifting it about one foot off the ground and dropping it. These procedures usually shock the foal slightly and initiate respiration.

A normal, healthy foal lifts its head and neck and rolls onto its chest within several seconds after delivery. Then the foal begins to make creeping movements away from its dam. If the mare has not stood up yet, the foal’s movements usually break the naval (umbilical) cord. You should wait for either the mare or foal to break the umbilical cord. Do not cut the umbilical cord immediately after birth, because it is thought the foal receives blood from the placenta after birth. Cutting the cord before this blood transfer may result in circulatory problems in the foal. Foals with circulatory problems typically seem dumb and may have convulsions, leading to the common terms of “dummy” or “wanderer” foals for this condition.

Once the umbilical cord breaks, the stump should be dipped in a mild, 1 to 2 percent iodine solution. The iodine drys the umbilical stump and prevents bacteria from traveling up the stump and entering the foal’s body. Bacteria that enter the foal through the umbilical stump cause a systemic infection known by various names, such as shigellosis, naval ill, joint ill, or polyarthritis. This infection causes severe illness or death in foals and causes swelling and deformities in the foal’s joints. 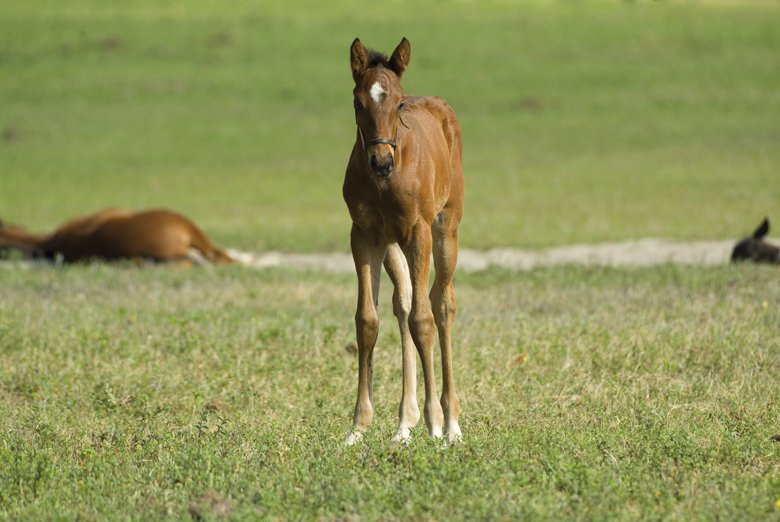 You should examine the naval stump for several days after birth to make sure that it remains dry. Urine dripping from the stump indicates that the fetal urine passage from the bladder to the umbilical (the urachus) has not closed. Normally the urachus closes at birth. If it fails to close, in a condition called “persistent urachus,” the foal should be treated by a veterinarian.

Usually, foals stand within 1 hour after birth. During the first standing attempts, the foal is unsteady and constantly shifting its head, neck, and feet in an attempt to remain balanced. This unsteadiness is normal, and you should let the foal stand by itself. Lifting the foal onto its feet before its legs are strong enough to support it may strain tendons and ligaments, and it interferes with the bonding process between the mare and foal.

When it stands, the foal should begin nursing attempts. The foal instinctively searches at the junction of the mare’s legs (both front and back) and body for the udder. The exploratory process involved with finding the udder is normal, and, again, you should resist the desire to “help” the foal. Human interference during initial nursing attempts actually may slow the foal’s progress in finding the udder, and it interferes with the mare-foal bond. However, if the foal has not nursed by 2 hours after birth or if the mare aggressively rejects the foal’s attempts to nurse, then it is time to interfere.

Occasionally a young mare or a mare with a swollen, sensitive udder will have to be restrained for several nursing sessions before she willingly lets the foal nurse. If the mare does not accept the foal after a few nursing bouts, you should call your veterinarian to tranquilize the mare. Keeping the mare tranquilized for a day or two solves most foal rejection problems. Remember to use extreme caution whenever you are working with a foal. Normally gentle, well-mannered mares can become very protective and aggressive if they think you are threatening their foal.

It is important for the foal to receive colostrum soon after birth because it contains antibodies needed for disease protection during the first few months of the foal’s life. These antibodies can be absorbed by the foal’s intestinal tract for up to 36 hours after birth, but absorptive ability begins decreasing drastically at 12 hours after birth. Therefore it is important that the foal receive colostrum before this time has passed. Your veterinarian can perform a simple test to determine if the foal has received adequate protection from colostrum. This test should be done about 6 hours after birth. This gives you an opportunity to correct potential deficiencies in immunity during the time the foal can absorb antibodies from its intestinal tract.

To ensure that the mare has high amounts of antibodies in her colostrum, vaccinate her approximately 30 days before foaling. If you miss this vaccination time, make sure the foal is protected against tetanus by giving it a tetanus antitoxin injection at birth. The tetanus antitoxin is less efficient than immunity from colostrum because it protects the foal for only 2 to 3 weeks while its umbilical stump heals. Because the foal’s immune system is not mature enough to use a tetanus toxoid vaccination until it is 3 to 5 months old, the foal is unprotected for 2-1/2 to 3 months if it does not receive protection from the colostrum.

Colostrum has a laxative effect on the foal, which helps it pass the fetal excrement (meconium). Most foals pass the meconium within 4 hours after birth. If the meconium is not passed, the foal can become constipated. A constipated foal frequently stops moving, squats, and raises its tail trying to defecate. Constipation can be relieved easily by giving the foal a warm, soapy water enema (1 to 2 cups) or a prepackaged human mineral oil enema. You should observe the foal for several days for signs of constipation and correct any problems. 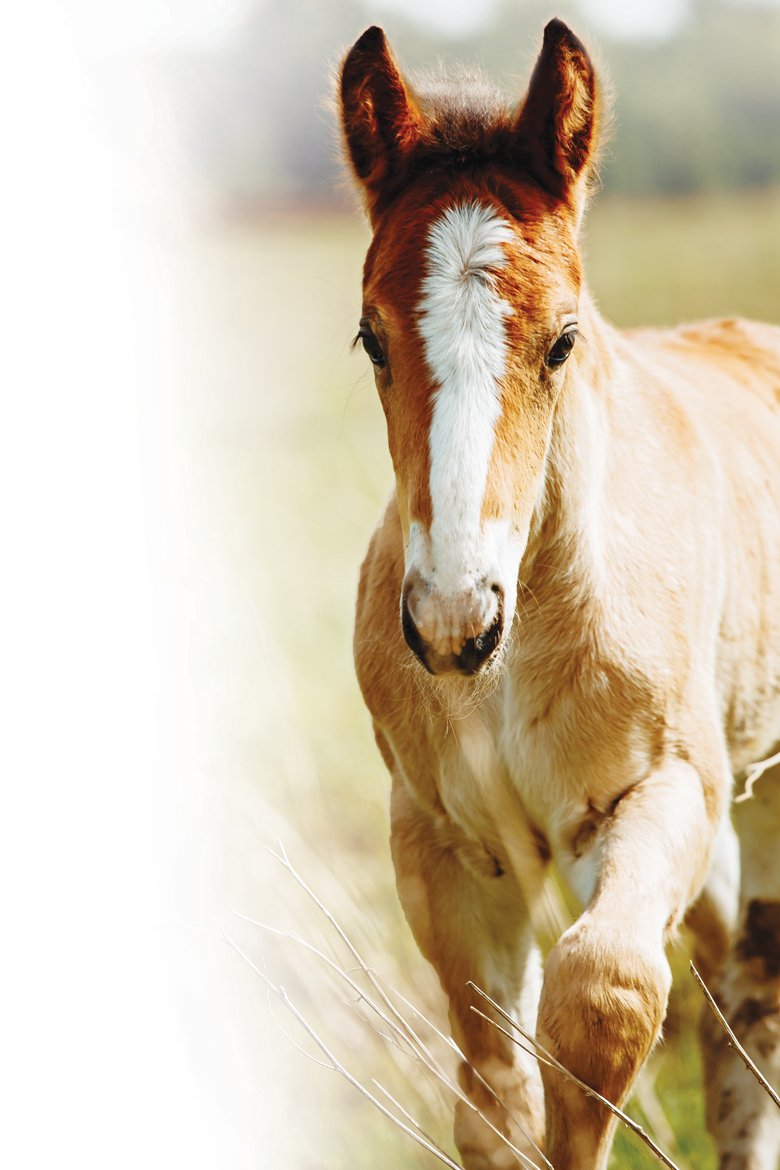 Diarrhea in the newborn foal is not common and may indicate a serious illness in the foal. A squirting type of diarrhea can result in dehydration and death of a newborn foal in a few hours. Immediately consult your veterinarian if your newborn foal develops diarrhea. However, mild diarrhea is common in older foals (1 to 2 weeks of age). This diarrhea often occurs during the mare’s foal heat (a fertile heat beginning approximately 7 to 9 days after foaling) and is commonly termed “foal heat scours.” In the past, horse breeders thought hormonal changes in the mare’s milk during foal heat caused diarrhea in the foal. Recent research has implicated an internal parasite (Strongyloides westeri) as the true cause of foal heat scours. This parasite is transmitted from the dam to the foal through the mammary gland. Foals begin to shed eggs in their feces 10 to 14 days after birth, resulting in scours that coincidentally occur with foal heat in the mare. If the foal is alert and nursing regularly, mild foal heat scours usually do not harm it. However if the foal stops nursing and becomes weak or dehydrated, consult your veterinarian immediately. You should keep the scoured areas around the foal’s buttocks clean to prevent scalding of the skin. Wash the area with mild soap and water and coat it with petroleum jelly to prevent scalding.

Many foals have limb weaknesses or angular deformities at birth. These include knuckling over at the fetlock joint, weak pasterns in which the back of the fetlock touches the ground, knock knees, and crooked legs. Many of these conditions correct themselves with exercise. If your foal is born with less than straight legs, your veterinarian can assess the situation and recommend a treatment.

Some foals may be born with hernias (defects in the body wall that allow part of the intestines to protrude under the skin). Hernias occur most frequently at the naval and scrotal areas. Small hernias often correct themselves with time, and larger hernias may require surgical correction. Again, this is a situation that your veterinarian should assess and treat.

Occasionally the newborn foal’s eyelids and lashes are turned in toward the eye rather than turned out as normal. This is a condition called “entropion” and causes tearing and irritation of the eye. If your foal has entropion, gently roll the eyelid out and consult your veterinarian for the proper eye ointment or treatment that you can perform.

Another infrequent problem in newborn foals is caused by an incompatibility between blood groups of the mare and foal. This condition is known as “neonatal isoerythrolysis” or “jaundice foal.” Antibodies to the foal’s red blood cells are formed by the mare and secreted in her colostrum. When the foal nurses and absorbs these antibodies, its red blood cells are destroyed. Without prompt veterinary treatment, the foal becomes anemic and dies. If you suspect neonatal isoerythrolysis, prevent the foal from consuming colostrum until you can get a veterinarian to test for the condition.

Several simple post-foaling management practices will help ensure the health of your mare and foal. A checklist follows.

To horse owners unfamiliar with raising foals, this post-foaling checklist may seem like a large amount of work. However, it only takes a few minutes to perform these management procedures, and then you can relax and enjoy your new foal knowing that you have done your best to ensure its well-being.