Doesn’t every handsome horse deserve to have a professional photo shoot? That was exactly the thought inspiring Abby Bruno of Moreno Valley, California, when she entered the 2020 Farnam SuperMask SuperModel Contest.

The winning horse is treated to a session with a professional photographer with his image to be used in an upcoming Farnam® SuperMask® fly mask ad. The winner also receives a grand prize jam packed with $1,000 worth of Farnam® fly control and grooming products.

The 2020 contest was the third annual for the popular event, which has drawn more entries each year. A panel of judges chooses the winner based on the following criteria: overall appeal and essence of a well-cared-for horse, audience appeal and appropriateness to contest theme.

“We had thousands of contenders this year so the judges had their work cut out for them. We were all so impressed with the quality of the submissions,” says Martha Lefebvre, senior marketing manager for Farnam. “We could easily see that our fans put a lot of effort into getting their horses groomed-up and looking beautiful for a chance to be the next SuperMask SuperModel.”

“When I saw the contest on Facebook I thought, why not try? I thought it would be cool to have Arnold be a super model and get his pictures done because I think he’s beautiful,” says Abby of her now 4-year-old Quarter Horse Bleu Steel who goes by the barn name “Arnold.”

Abby, a California native, nicknamed her photogenic gelding after the 38th governor of California, Arnold Schwarzenegger. 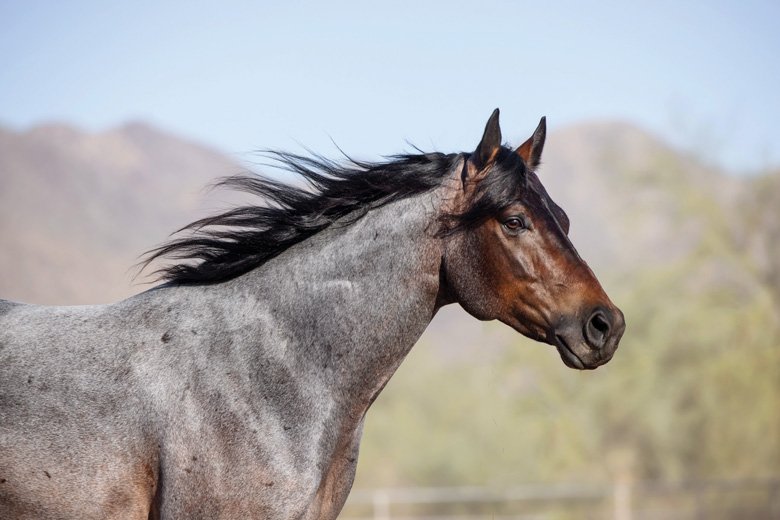 “I never win contests, so I was 100 percent surprised. When I read the email saying he’d won, I wondered if it was spam, but I hoped it was legit,” recalls an overjoyed Abby. After calling the number in the email from Farnam, the amazing news was confirmed.

“The first person I told was my mom,” says Abby. “Then I told my friend Michaella, who felt a little responsible since she’s the one who encouraged me to buy him in the first place.

Horses have been at the heart of Abby Bruno’s life since she could walk.

Growing up on the ranch with parents who grew alfalfa and had a feed store, Abby immediately gravitated to the family’s horses. As soon as she showed an interest, she was given her first pony. It wasn’t long until her natural competitive nature revealed itself and her mother, who has shown for years, made sure Abby had lessons with a trainer.

“I have always loved horses; I live and breathe them,” says Abby, who was showing at the world level by age 8. “I started showing POAs when I was 6 years old doing leadline classes,” says Abby. I stayed with ponies until 2005, and then I started showing Appaloosas.”

Abby won her first youth world championship in the Appaloosa show ring in 2006 and would go on to win numerous championships over the next decade. Through the years she had great success with her Appaloosa gelding Shys Blue Boy, winning multiple championships together, including the 2010 High-Point Youth All-Around title and 2010 Reserve Youth World Championship.

In 2016, Abby made the decision to start showing Quarter Horses.

In 2018, Abby left California for Tarleton State University in Stephenville, Texas, to pursue their animal science pre-vet program. For someone who’s always been surrounded by horses, going off to college without a horse felt strange.

“My dad said he wasn’t sending me to college with a horse,” laughs Abby. “I was only there a few weeks before I bought Arnold.”

In a world where people do so much online, it’s not surprising to look for horses there. But on Super Bowl Sunday 2019, Abby did more than look. She ended up buying the horse her friend Michaella from back home had spotted first.

“It all started when Michaella sent me an Instagram message with his picture saying I needed to buy him because he was pretty and she knew I’d always wanted a roan horse,” says Abby.

Turns out the good-looking 2-year-old bay roan Quarter Horse gelding by CBS Dirty Blue Revue was in a Facebook auction. After Abby sent his photo to her mother, she ended up bidding on him with her mom’s approval. (Abby admits she and her mother both have a fond place in their hearts for gray horses.)

“I set my timer and kept refreshing my Facebook page and I got him!” she grins.

Arnold was unbroken when Abby purchased him, so she promptly began his breaking process. She’s handled every bit of his training and Arnold proved to be a quick study. Abby has high hopes for him and he’s already off to a good start. 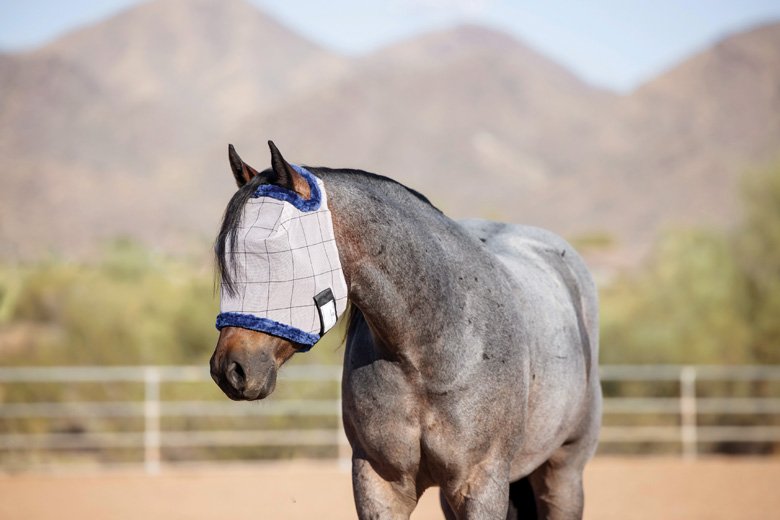 She decided to finish college in her home state and returned from Texas after a little over a year at Tarleton. Arnold came home with her, of course, and moved into the first stall at the barn on her family’s ranch.

“I want to finish my BS in biological sciences,” says Abby, who initially had hopes of becoming a veterinarian, but is undecided now. Along with many other students, her college plans were interrupted in early 2020 due to the pandemic. She’s happy to be safe at home and working at the family ranch.

Arnold may be young, but his show career is already under way. He and Abby competed in the AQHA Sun and Surf Circuit in Del Mar, California, on September 10-13, 2020.

“It was his first pattern class in the ranch riding, with all the spins and transitions, and he did really good,” says a proud Abby. “He was the only young snaffle bit horse in all his classes. When they asked for the extended lope, he was awesome. He has an amazing mind on him and nothing scares him. Everybody was drooling over him!”

Abby’s plans are to turn Arnold into an all-around horse and compete in horsemanship, showmanship, trail and western riding.

“When he was showing, he had his ears up the whole time and was enjoying it. I want him to last a lifetime, so I don’t want to push my horse into something he’s not ready to do. I’ve been in the horse show world a long time and I’ve seen how hard it can be on a horse if they’re pushed,” she notes.

Already 15.1 hands, Arnold still has some growing to do, so Abby intends to take her time guiding her young prospect into his show career.

Like her other horses, Arnold will benefit from the support of a whole team–veterinarian, farrier and equine physical therapist–to help him stay sound and healthy along the way.

Arnold’s SuperMask SuperModel photo shoot took place the first week of March 2021. Arnold handled it like the pro he is.

“Ears up and posing like crazy!” says Abby. “He likes his picture and he knows when it’s getting taken.”

She and Arnold have been enjoying the prize package extravaganza they received as SuperMask SuperModel winner.

“Oh my goodness, there were so many products! Opening the boxes felt like Christmas!” says Abby. “I was using some of the fly control products the very first day. I was already a SuperMask fly mask user, of course, and now Arnold has a new one.”

“I’ve been using Vetrolin products since I had ponies and absolutely love them. That remarkable smell is so recognizable. It brings back memories and makes me think of getting ready for a horse show. I used Vetrolin all the time when I started showing as a youth, so I always associate it with a horse show,” says Abby.

“I’ve used Farnam products all my show career, so I’m really familiar with them, but there were some new products in the prize package I hadn’t used before,” she adds. “I’ve used the leather care products, but not the Leather New Total Care 2 in 1. I have leather chairs so I’m excited to use it on those.”

In addition to Arnold, Abby is happily using the Farnam windfall of products on her other horses too. These include Arnold’s full sibling, a weanling colt Abby bought from the original breeder, VS Lady N Bay, her 3-year-old Quarter Horse filly, Shys Blue Boy, the retired 20-year-old Appaloosa gelding she won so many titles with, and the 25-year-old POA Cookies Blue Ribbon (“Little Blue”), she first started showing on.

In late 2020, Abby added to her herd, with the purchase of Blaze in Trouble, a 2-year-old Quarter Horse filly.

“She’s a multiple National Snaffle Bit Association (NSBA) champion, and I’ll be showing her in all the non-pro Western Pleasure futurities,” says Abby. “I’m very excited to show her and to continue showing Arnold.”

“Little Blue is the one who started it all. He’s the gray POA I showed as a kid and the one I won world and international titles on,” says Abby. “He’s never leaving; he will be here forever.” 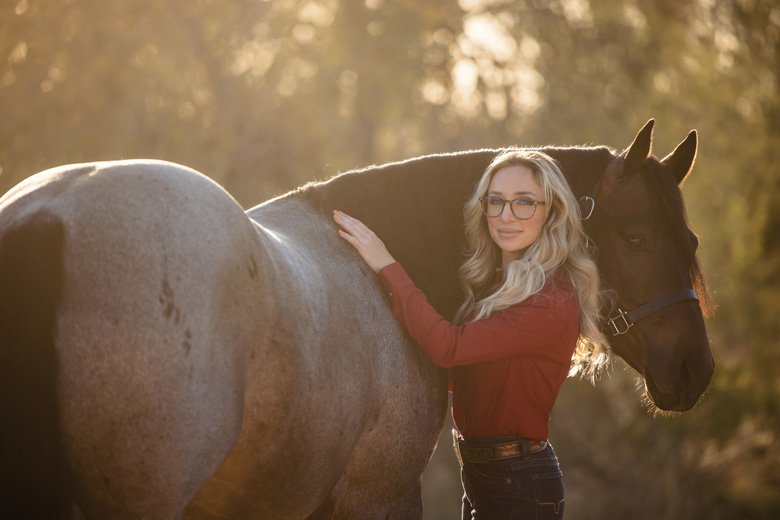 Horses aren’t the only critters on the Bruno family ranch and in Abby’s life.

She has a border collie named Indie, a Pomeranian named Cowboy and a three-legged cat named Monster. Both Cowboy and Monster have logged many miles with Abby traveling across the country for horse shows.

“When I’m not playing with horses, I love to road bike, paint and draw,” says Abby, a talented artist who has done some commissioned animal memorial portraits.

Her favorite part of creating those portraits is bringing to life the emotion and personality of the animal in its expression. It’s a special project for this dedicated animal lover.