Basic conditioning of the equine athlete involves consideration of the event in which the horse will be competing, the level of competition that you expect the horse to achieve, the time you have in which to condition the horse, and the horse’s previous conditioning for the event.

Some of the most important physical adaptations achieved by conditioning involve:

There are two general classes of conditioning programs: slow speed and high speed.

Trainers usually start the horses off slowly and gradually increase the distance at two-to-three week intervals. The total length of time a horse remains on this conditioning program varies with the type of event and can be anywhere from four to five weeks (racehorses) to nine months (endurance horses). Improvements in aerobic capacity, limb strength, and adaptation of skeletal muscle have been seen with slow-speed conditioning.

High-speed conditioning is used to improve the anaerobic capacity of a horse and is generally interspersed with slow-speed, long distance days. This conditioning method varies with the horse and the event. Some trainers increase the speed for very short distances until near maximum speed is reached, then increase the distance. Others establish a set distance and gradually increase the speed. The frequency of the high-speed days varies with the conditioning method used. For example, in North America, trainers will commonly use “breeze” (fast galloping for short distances) work at 75 percent of the maximum speed of the event one time every seven to 10 days. Other trainers will gallop their horses at near maximum event speed one time every five days.

The common goal of high-speed conditioning is to increase the amount of training that stimulates anaerobic production of ATP without causing fatigue or overtraining. It is thought that conditioning at maximum event speed may overwork a horse; therefore, most trainers condition their horses at 70 to 85 percent maximum event speed. In England, horses work on a rotational conditioning schedule of hills and flat ground. Using a treadmill with a 5 to 10 percent incline will also increase the anaerobic capacity of a horse without galloping at maximum speed. The physiological adaptations to high-speed conditioning include an increase in Type II muscle fibers.

Interval training is the use of multiple workouts on the same day separated by short rest periods. Some trainers will use this conditioning method as the horse’s high-speed program. Limited research has shown that interval training may alter muscle fiber type, something that has not been shown to occur with strictly high-speed conditioning. Interval conditioning of the equine athlete should not be performed at 95 to 100 percent maximum speed, as it may lead to overtraining and possibly the reversal of physiological training adaptations.

When conditioning a horse for events such as pole bending or fox hunting, skill training can be alternated with high-speed and slow-speed days. 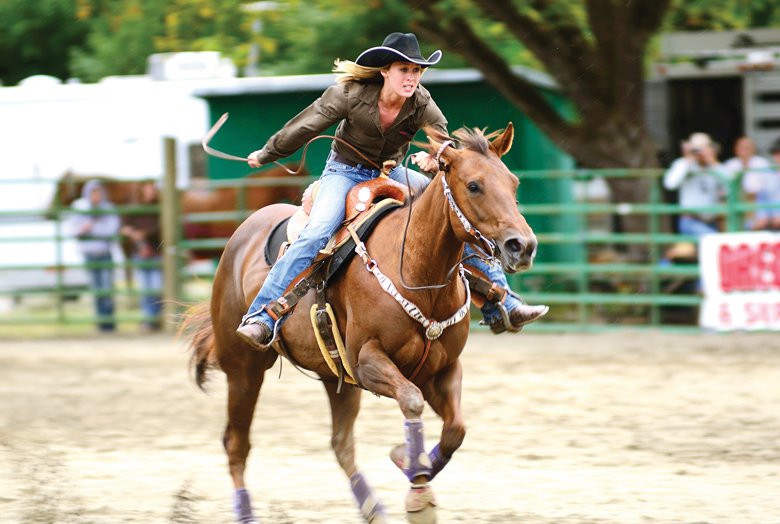 In order to maintain peak fitness of an athletic horse, the conditioning program must always be evaluated and adjusted.

Constant exercise at suboptimal intensities will limit the rate of adaptation, and constant exercise at maximum intensities may contribute to overtraining. Overtraining is a loss of performance ability despite the maintenance of or an increase in training effort. When overtraining occurs, the horse’s conditioning program must stop or be reduced for a variable period of time in order for the horse to recover.

Detraining is the sudden cessation of a conditioning program for reasons such as sickness or injury. During this time, the horse experiences a rapid loss of physiological training adaptations. Changes in muscle occur in two to four weeks, followed by cardiovascular and bone changes. Decrease in muscle size and strength occur in the shortest amount of time. Oxygen uptake and ventilation capacity decreases within three weeks of detraining.

By  Ashley Griffin, University of Kentucky
Courtesy of Extension