Sunshine and blue skies greeted exhibitors in Scottsdale for the annual Arizona Fall Championship held September 18-24. With 7,607 AQHA entries and 9,308 total entries, the AZ Fall Championship saw increases in all divisions over last year’s show. The increases were seen across the spectrum including AQHA, NSBA and NRCHA. This show has something for everyone and every level. The show attracts World Champions, yet there were also first-timers launching their showing adventure in the arenas of WestWorld. A wide array of leveled classes accommodates the varied needs and aspirations of exhibitors. 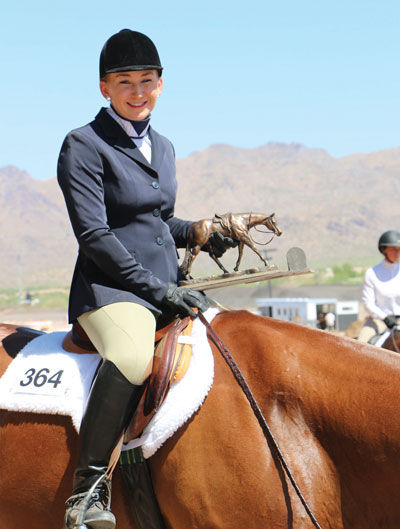 Cow Horse, Reining and Ranch classes continue to be a huge draw, yet at the same time Rail, Trail and pattern classes also saw more exhibitors in the ring. The show’s popularity can be attributed to several factors. Most everyone comments on how much fun they have, and the prizes are a huge incentive. The handsome bronze circuit award trophies, saddles and cash awards are coveted by all. 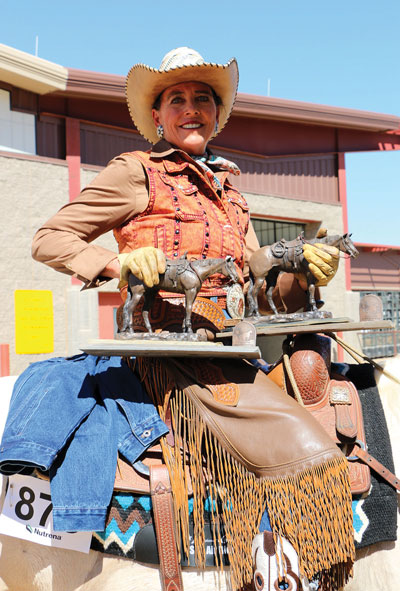 High Point saddles where awarded to the top Non Pros in Levels 1, 2 and 3. Points from Showmanship, Halter, Pleasure and Horsemanship were tallied for one horse/one rider. Lauren Stanley racked up the most points aboard Extremely Good to take home the beautiful Superior Saddlery Saddle award for Level 3. In the Level 2 division, Deb Shatley won the saddle with Quiteabitlazy. Thalia Gelbs showed I Am Good II to win the Level 1 Non Pro saddle. 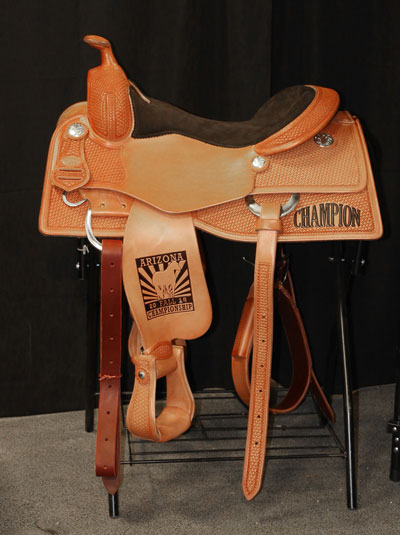 This year debuted a new award, the Ranch Horse Challenges for L1 Open, Open, Amateur and Select divisions. Each division awarded $500 and a buckle to the champion, while reserve won $400 and a bronc halter. Exhibitors had their points from Ranch Riding, Ranch Trail (non AQHA), Ranch on the Rail (non AQHA) and halter combined. Smooth Cat Man, ridden by Leslie Lange for owner Carly Lueck took the top honors in the L1 Open. They also picked up the Circuit Award in L1 Ranch Riding and Smooth Cat Man came back into the Arena with Carly aboard to pick up another trophy as L1Amateur champion. 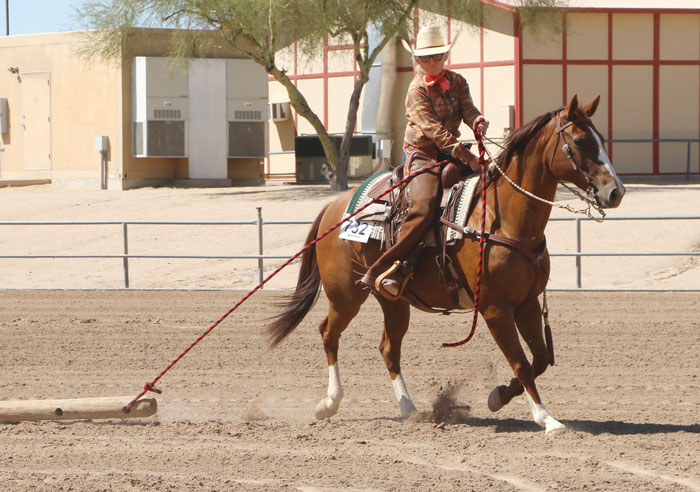 Laurel Walker-Denton rode Anne Macrea’s horse Pretty Smart Guy to the Open Ranch Championship spot. The team also picked up a Circuit Award in Open Ranch Riding. Beth Evans put together nice classes all week and won the Amateur Ranch division on her talented buckskin mare Super Diva Ziva. The pair also cleaned up in the VRH competition cinching the high point placing in VRH Amateur Ranch Riding, VRH Open Ranch Riding, VRH Ranch Trail, and Ranch Conformation. Tricia Sarchett and Will Be Noticed were at the top or their game all week too. She was presented with the Select Ranch Challenge buckle along with a Circuit Award in Amateur Ranch on the Rail. Tricia then switched gears and won trophies for Amateur Hunter Hack, Select Hunter Under Saddle Select and Hunt Seat Equitation. 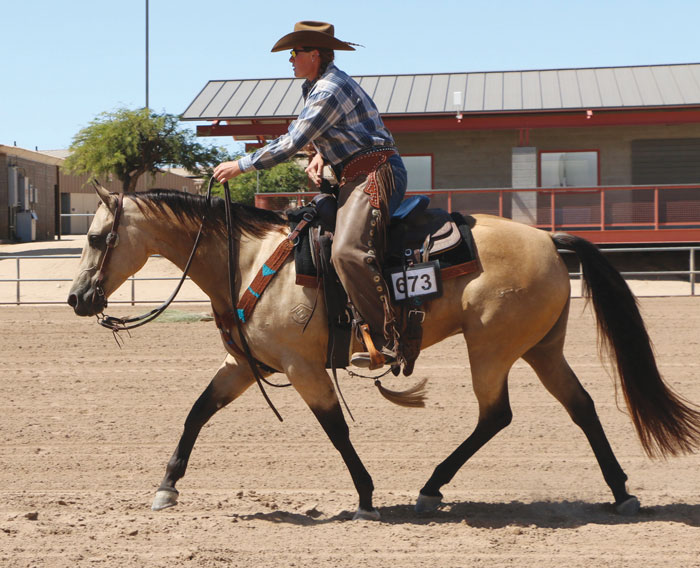 The AZ Fall Championship held a mini version of Sun Circuit’s fun and popular tournament style competition. The West Bracket Horsemanship Tournament was open to all who made it on to the 2019 National Championship Summer Ranking List who were showing in Horsemanship. The top four exhibitors after the first set of AQHA judges got to ride the challenging pattern in a head to head competition. At stake was a Championship buckle and $500 cash prize for the winner in each division. Reserve would take home a logo’d director’s chair and $250. A free pizza party got the crowd warmed up for the matches and they boisterously hooted and hollered for each or the well-matched rides. 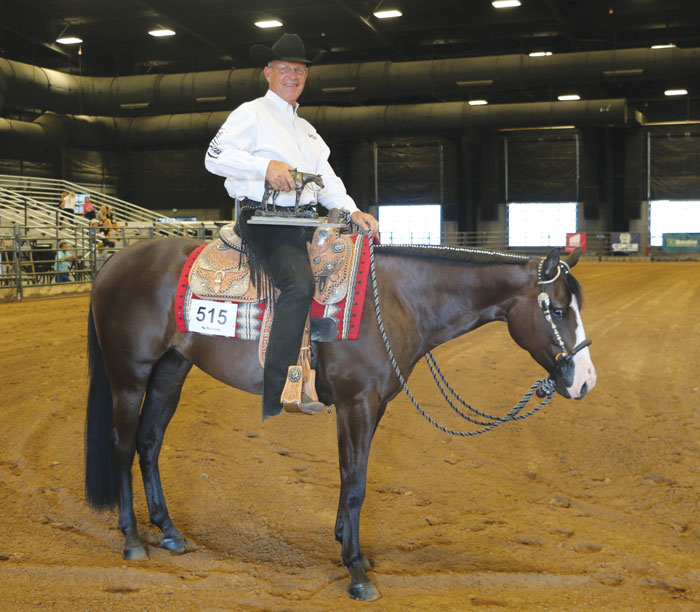 After round one of the tournament, Claire McDowall and Brooke Jolstad came back to ride again in the Youth. Both ladies knew what to expect and used every ounce of skill they could muster. In the end Claire prevailed on BF Fun Size for the Youth Championship. Claire was heard to say shortly after that it was the most fun she has had showing. Brooke was a close second aboard Betta Believe It. 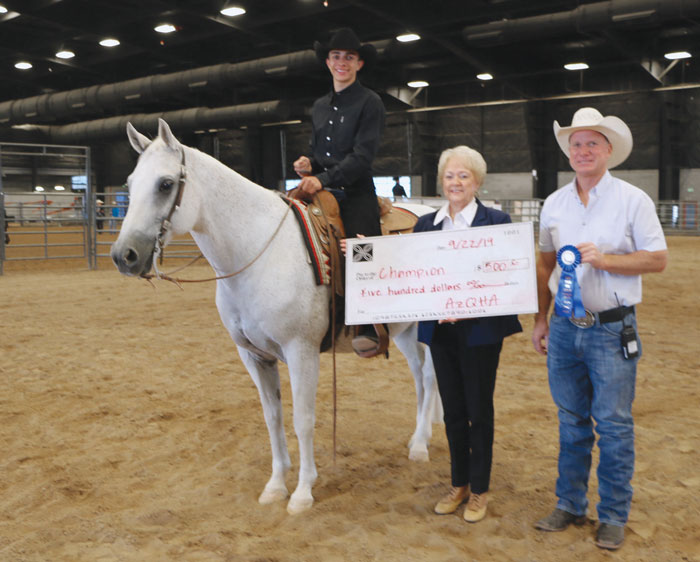 The Amateur division saw Tony Anderman aboard Solo Invested ride against Natalia DeVancenty on Moonlite Madness in the final pairing. Tony knew the format well as he was a Showmanship finalist in the National Championship Tournament last March. While both had a great ride, Tony edged out Natalia on the pattern for the win. 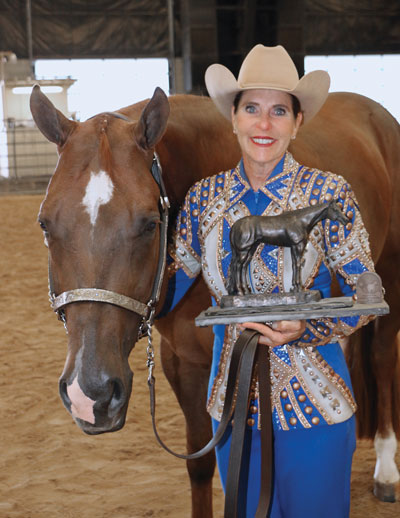 Joanne Garnett and Kim Gutowski fist bumped prior to their final show down in The West Bracket Tournament Select Division. Both ladies had already been solid on their first goes. Joanne’s second ride on Hez Pretty Extreme squeaked past Kim and Toucht to claim the buckle. These two were neck and neck in horsemanship for the entire show. In fact, Kim reversed that the placings when it came to the L3 Amateur Select Horsemanship Circuit Award. Joanne continued to do well throughout the week and added the All Around Select Amateur Best of Show title to her long list of accomplishments. 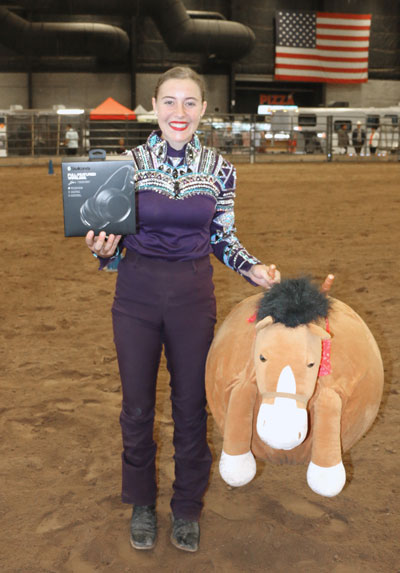 Best of Show awards were presented in both the All Around and Ranch and Cattle Divisions. Winners received a pair of Rod Patrick boots, and gift certificates from Cinch, SmartPak and Professionals Choice Bob Avila Collection. Other winners in the All Around include Whos Your Bay Bae ridden by Sara Newton for Kelly Brikenholz in the Open. Lauren Stanley and Extremely Good Stuff won the honor in Amateur while the Level 1 Amateur award went to Toni Ward and Good Cowboy Casanova. In Youth, it was Ella Petak and One Vital Code RV who accumulated the most points. Ima lazy Cowboy and Kaitlyn Bloom were Best of Show for Level 1. 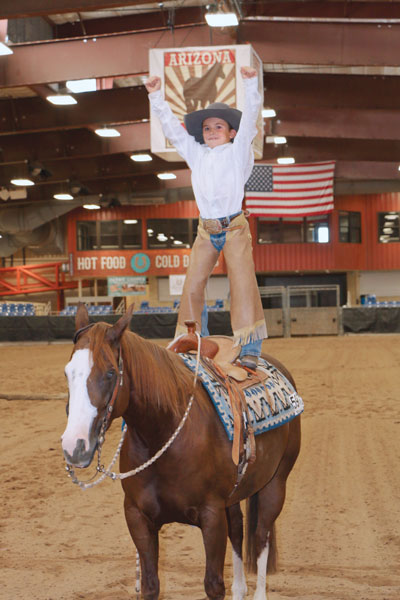 In the Reining and Cattle Division, Brad Barkemeyer piloted Five Star Reyting to win the Open Best of Show award and picked up the Junior Working Cow Horse Circuit trophy along the way. Chantz Stewart and Leggy Lisa Marie were named Best of Show for the Amateurs. Caroline Buchanan and A Time For Jazz where the Youth Best of Show award winners.

There were 17 entries in the NSBA 3/4 Year Old Trail. Chad Evans navigated the poles in fine fashion with Florida Georgia Line for owner Ruth Rowe.

In addition to the action in the ring, exhibitors had a chance to win gift certificates and merchandise with the infamous Prize Patrol. Tom Forehand brought his humor and enthusiasm to his new role as captain and enjoyed cooking up an even crazier set of challenges. Winners took home TVs, head phones and electronics from the Arizona Quarter Horse Association along with prizes donated by Smartpak, Show Me Again, Sami’s Fine Jewelry, Professional’s Choice Bob Avila Collection, Showtime Show Clothing, Perfect Equine Cold Water Spa, Watsons Hat, Leslie Hellman Therapeutics and Sport Horse Chiropractic.

The show also made a huge impact on the lives of many Youth horsemen. The Arizona Quarter Horse Association awarded over $18,000 in scholarship funds during the AZ Fall Championship. It was the third year that the organization held their innovative ASCENT scholarship competitions for AzQHA Youth members on the last day of the show. Money was earned through an Interscholastic Scholarship Show which offered 5 classes in Horsemanship and 3 in Reining. Additionally, middle and high school students were awarded scholarship funds through a three person panel interview process.